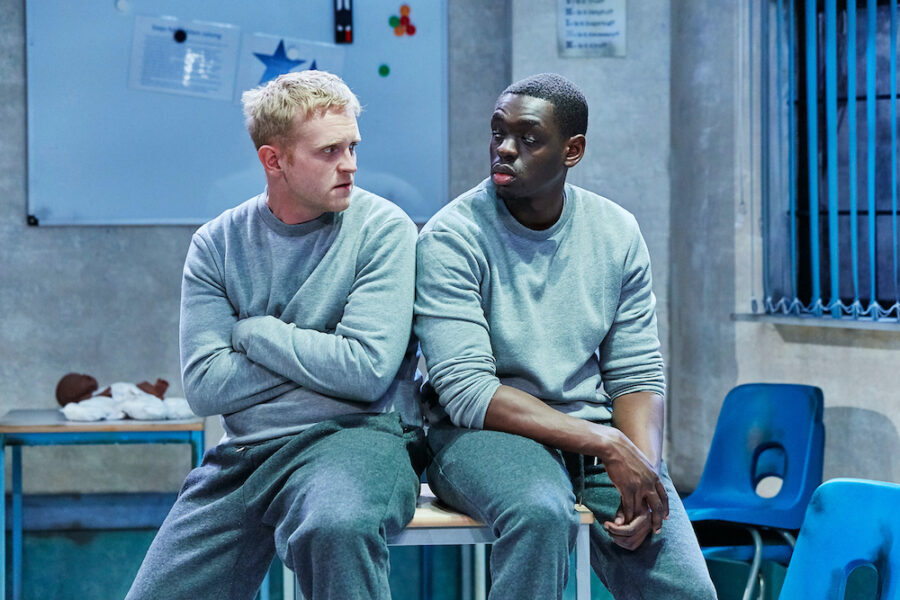 Film is the new theatre — this we know, but does the distance imposed by the change of medium increase or decrease the impact of the story? The latest example of this problematic switch from stage to screen is the strongly acted Shook, Samuel Bailey’s debut play, which won the 2019 Papatango New Writing Prize and had a run at the Southwark Playhouse in November of that year. Although its planned transfer to the Trafalgar Studios in the West End was curtailed when the pandemic hit, the drama has been superbly filmed and is available to watch online on the Papatango website.

Set in a rundown classroom in a young offenders institution, the story concerns three inmates — Riyad, Cain, and Jonjo — who are meant to be learning new skills to help them cope in the outside world when, or if, they are released. Since all three are already fathers, this is a parenting class, complete with teacher Grace, and plastic dolls which can be used to practice nappy changing, or cardiopulmonary resuscitation for infants (top tip: don’t slam down too hard on the baby’s chest). This tiny space, with its whiteboard, chairs, and cupboards, looks grim, but is a welcome relief to anyone who is banged up for 23 hours a day.

The three young men are vividly characterized: Cain is a Liverpudlian motherless motormouth, full of agitation and aggression; Riyad is an ex-gang member, calmer, stronger, and trying hard to better himself through education; and the slightly posher Jonjo is a highly introverted dog-lover who once lost his temper, with life-changing consequences. For these boys who are on their way to becoming men the issue of their maleness is something that they have to assert 24/7, in various ways. Usually involving verbal viciousness and threats of physical violence. Only occasionally is the softer side of their identity allowed to peek through.

The psychology of incarceration means that all three are powerless but in an effectively controlled environment. They react to everyday life with a mixture of schoolboy clowning and grown-up pain. They experience feelings of loss, despair, and desperation. Each of them is thrillingly individual and also more complex than at first appears. Their unpredictability means that some moments — like Cain’s rapid demonstration of nappy changing techniques — are a joy, although we also know that their hopes will ultimately be crushed. When times get hard, they get shook — and revert back to type.

Bailey’s writing has a powerfully realized hyper-naturalism. This is attractive because of its high definition realism, with character detail leaking out like occasional tears and sketchy back story emerging out of the shadows of embarrassed silences. Each man is psychologically convincing, from Cain, who prefers the conditions inside prison to the stresses of his life outside, to Riyad, who is pretty uncertain that his ambition to be a businessman can be helped through learning to do GCSE math. In terms of banter, there are some good jokes and popular culture references that liven up the 90-minute play.

The use of an extremely naturalistic style has both pluses and minuses: on the plus side, this feels like an emotionally true representation of the situation in most young offenders institutions, and its portrait of young masculinity confronting the problems of fatherhood is convincing. On the minus side, there is something depressingly traditional in the piece’s lack of theatricality, and the poverty of its metaphorical content. Extreme realism tends to shuffle off the more interesting aspects of imaginative theatre into the corners of the piece, and this is certainly the case here. Likewise, the play’s politics are affected by its aesthetics: like most realistic portraits of young offenders, this story offers little hope. At one and the same time, Shook is an accurate picture of the despair of young criminals — and proof that nothing can be done to help them. To me, this is a counsel of despair.

So although Bailey has created a strongly felt situation, the absence of a compelling plot, or indeed of any real sense of drama, makes the predictably downbeat ending rather depressing. Whatever insights the play has to offer, with its scenes of sweet-swapping playground rivalry, get lost in a pervading feeling of aching sadness, and I mean really aching. Still, there is much to appreciate in director George Turvey’s tightly controlled production, with excellent performances from Josh Finan (Cain), Ivan Oyik (Riyad), and Josef Davies (Jonjo), plus great support by Andrea Hall as their rather underwritten teacher. Jasmine Swan’s design is impeccable and Max Brill’s filming brilliantly captures the men’s glowering rage and moments of acute vulnerability. But because we are not in the same small room as the characters, the film gives us the distance to see the defects in the drama more clearly than if we were more directly experiencing their situation. In the theatre, we would be in their room; on film, we are in our own room.

Shook is streaming online at Papatango until 28 February.

This article was originally posted in The Arts Desk and has been reposted with permission. To read the original article, click here.