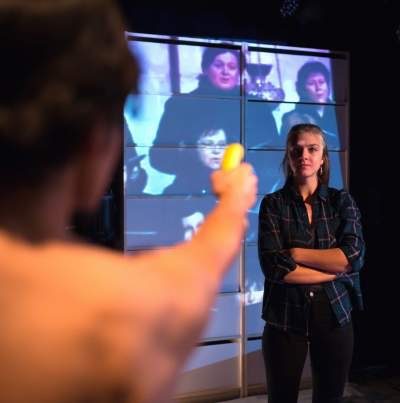 The play Poker Face by acclaimed Czech playwright Petr Kolečko–in Eva Daníčková’s translation and under Becka McFadde’s direction–feels like it’s happening right here right now. A great achievement, given that the action takes place in a flat in Prague and the play is both about the 1980s and the 2010s.

Its primary concern is the after-taste and dark side of idealism–cynicism. The play scrutinizes the relationship between the disillusioned generation that made the Velvet Revolution and the currently young and hopeful – but with dodgy principles–generation in the Czech Republic.

Poker Face is a symbol of the apparent cynicism of Jana, a billionaire who made her fortune by playing poker. But her past looks different: she protested in the 1989 movement, has been in love with the revolutionary leader and ex-President Václav Havel and possibly has a child by him. In fact, as she puts it herself, there is a 14.7 % chance that Havel or any other of the seven men present at the bar the night Jana got pregnant, is Pavlína’s father–Jana was too drunk to remember. Now Jana appears not to believe in anything but self-interest and says she doesn’t care about her twenty-something daughter Pavlína–who, in her turn, hates her mother. Unfortunately, the character of the daughter is too schematic. She appears to be only a protest against her mother’s values.

We get more of a flavor of Pavlína’s boyfriend, Viktor, a bizarre supposed idealist who tries to prove Jana wrong. But in his doing so we realize that cynicism, self-interest, and idealism are intertwined in both generations (and perhaps the world at large). Jana then seems only braver by admitting it. It doesn’t help that Viktor is a prick himself.

As such, Jana’s character prevails in the play. This imbalance is helped by the domineeringly large projection of footage from Havel’s grand funeral. 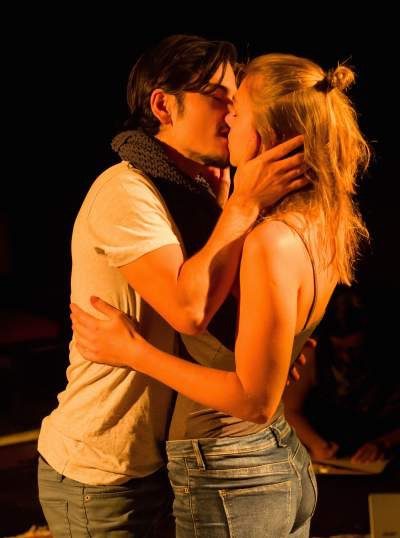 The differences between the idealism of the Velvet Revolution and today’s youth is only slightly explored. The play would gain depth if the author focused on contrasting the liberty Jana fought for–capitalists’ core values–with Viktor’s desire to prove capitalism’s myth that hard work pays off.

The action takes place at Christmas in Jana and Pavlína’s flat. Witty lines such as “What do functional families do on Christmas Day?” refresh the feeling that the world shares a common global wit and pop culture–and market rules with their subsequent tragedies too. The fact that Jana’s going to an extremely well-funded poker championship in Greece during the recession serves as the pretext to speak about how, in their faithlessness and hopelessness, people are now gambling their lives worldwide.

The acting of all three actors was convincing and helped by the intimate King’s Head space–yet the stage design would have been more effective if less idiosyncratic and more coherent. The Persian rug, bananas instead of guns and edible paper decorations just didn’t cohere in terms of ideas, shape, color or texture.

As a play about the Velvet Revolution generation’s disillusionment, Poker Face works well. But, with its pessimism, the play doesn’t do justice to the youth of today.

This article originally appeared in Central and Eastern European London Review on October 20th, 2016 and has been reposted with permission. 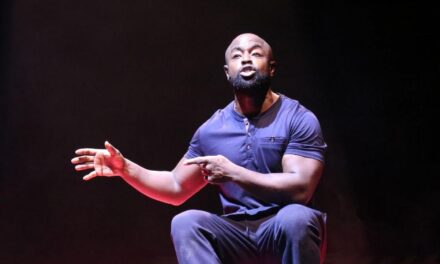