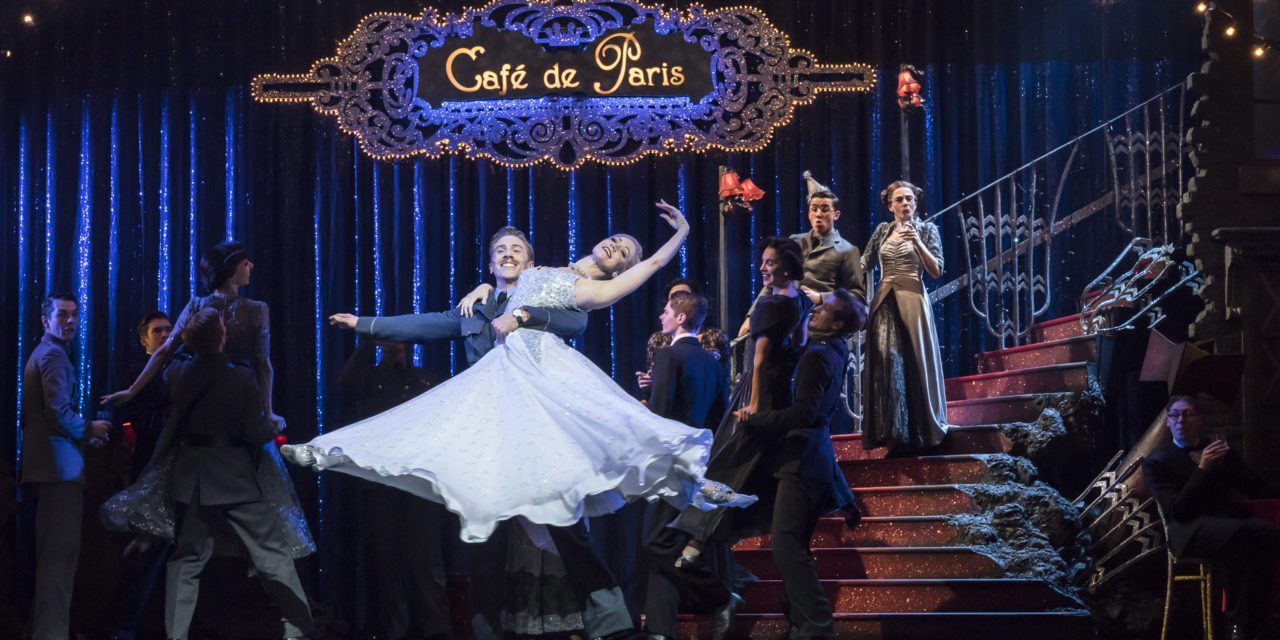 Andrew Monaghan and Ashley Shaw with the company in Matthew Bourne's "Cinderella." Photo by Johan Persson. 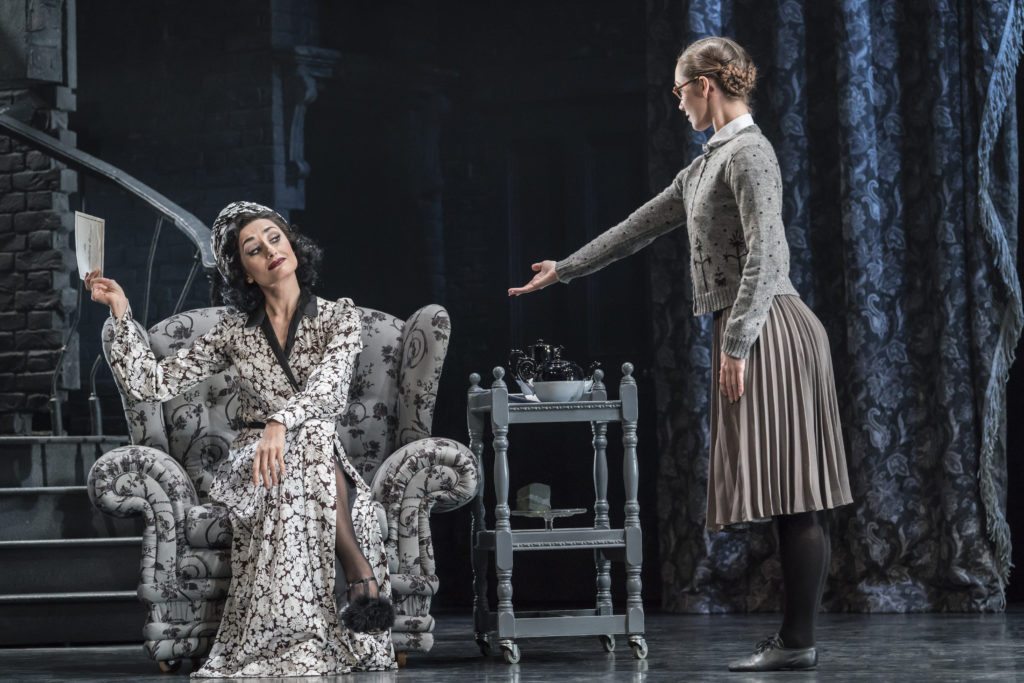 When he first created his Cinderella in 1997, Matthew Bourne couldn’t have predicted any better than the rest of us how compelling it could be for an American audience in 2019 but there doesn’t seem to be a better fit in these times of global tension and conflict, fueled by divisiveness and fear.  Composer Prokofiev crafted the score during WWII, and that fact inspired Bourne to set the fairytale in London during the war when nightly air raids were a common occurrence and death an all too familiar experience.  Currently performing at the Ahmanson Theatre in downtown Los Angeles, this exquisitely designed and athletically executed night of dance is nothing short of magical and, even more importantly, it is a deeply and surprisingly moving experience. 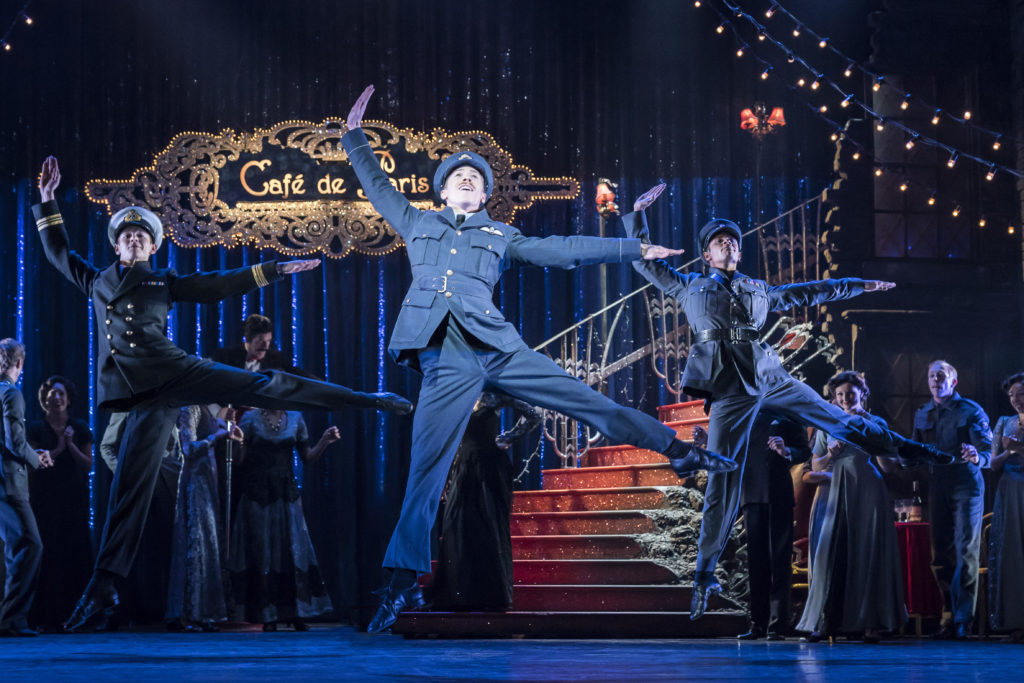 A feast for the eyes in every aspect, the world of Bourne’s Cinderella is one made up of half-bombed buildings, young men and women desperate for a night of fun distraction, and shell-shocked soldiers.  Cinderella [Ashley Shaw] still lives with her father, wicked stepmother and evil stepsisters but Robert, The Father [Alan Vincent] does not die, he is wheelchair bound and visibly, poorly affected by the war.  Sybil, The Step-Mother [Madelaine Brennan] may not force her step-daughter to clean out the fireplace but it is clear she lords what little power she has over Cinderella and has no problem finding a little male attention on the side while her husband stays at home.  There are not only two step-sisters Irene [Sophia Hurdley] and Vivien [Anjali Mehra] but also three step-brothers; Malcolm [Jackson Fisch], Vernon [Dan Wright] and Elliott [Stephen Murray] and each of them have very clear, sometimes unsettling quirks that make life uncomfortable if not miserable for Cinderella. 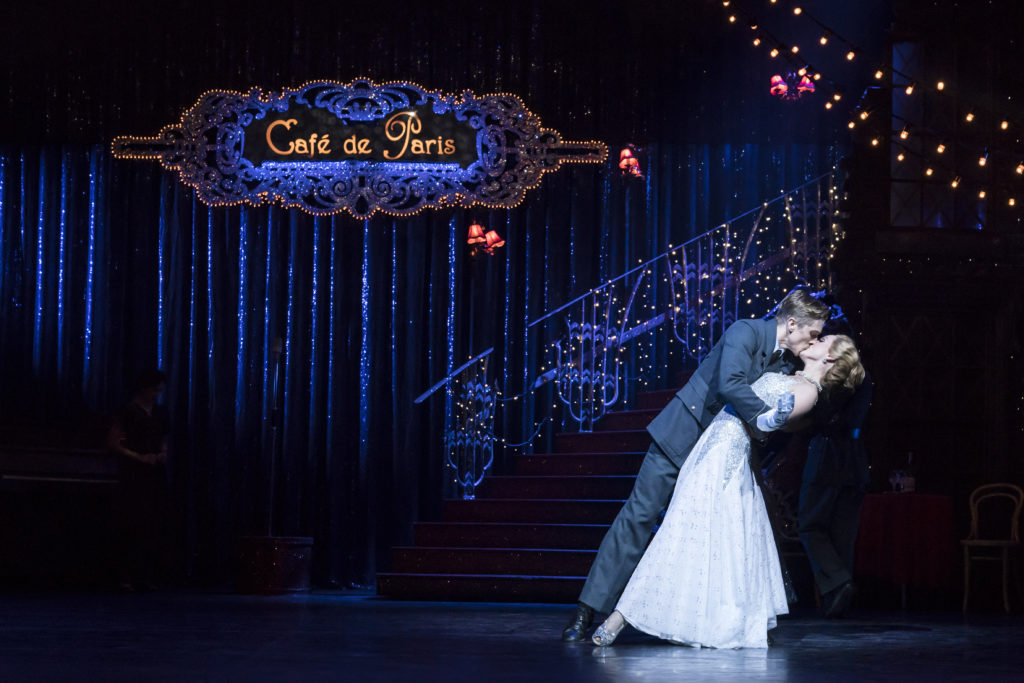 There is no royal ball to attend, but instead a night of dancing at the Café de Paris, a nightspot that was famously bombed on March 8, 1941.  There are no princes in attendance.  In lieu of that love interest, Harry, The Pilot [Andrew Monaghan] is a soldier with a head wound, staggering in pain and most likely flooded with adrenaline in fear thanks to what we now know as PTSD.  His agonizing movements and searching gestures communicate his state of mind eloquently.   The Angel [Liam Mower] replaces our traditional role of fairy godmother with powers that are more fitting to the times.  As the second act begins, the cafe patrons lie on the floor, bombed and in flames.  The Angel brings each back to life to serve as figures in Cinderella’s dream sequence where she arrives in a dress that looks a lot more familiar to fans of the Disney version of the tale [complete with blonde hair and all the sparkles] to dance with Harry. 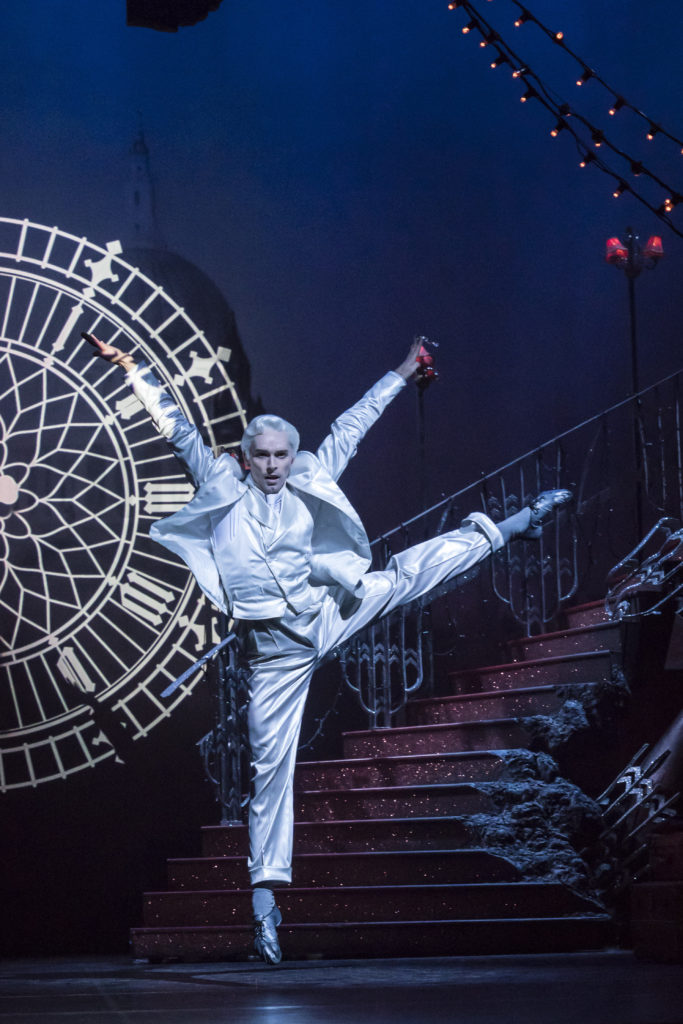 Not one emotional note in Prokofiev’s score goes unnoticed and there is no moment where the cast is not fully engaged in the world.  Therefore there is not one moment where we are not transported to the point where the night went by all too quickly.  Just as this take on the story pushes us into unfamiliar Cinderella territory, the choreography tests your assumptions about what ballet is and what kind of movement you should expect to see.  The Angel glides through space with a delicate air one moment then gestures over a body, a set piece, an arm to create a ripple effect of movement that puts one character in the path of another and when the two meet, they might launch into the air in a gravity-defying gesture or they might drunkenly fall into each other’s arms for a bit of swing dancing.   As the Angel, Liam Mower’s is breathtaking–it seems impossible that we never hear his feet hit the floor.  As Harry and Cinderella, Andrew Monaghan and Ashley Shaw embody all things romantic with such grace, the hardest heart will be hard pressed not to break just a little. 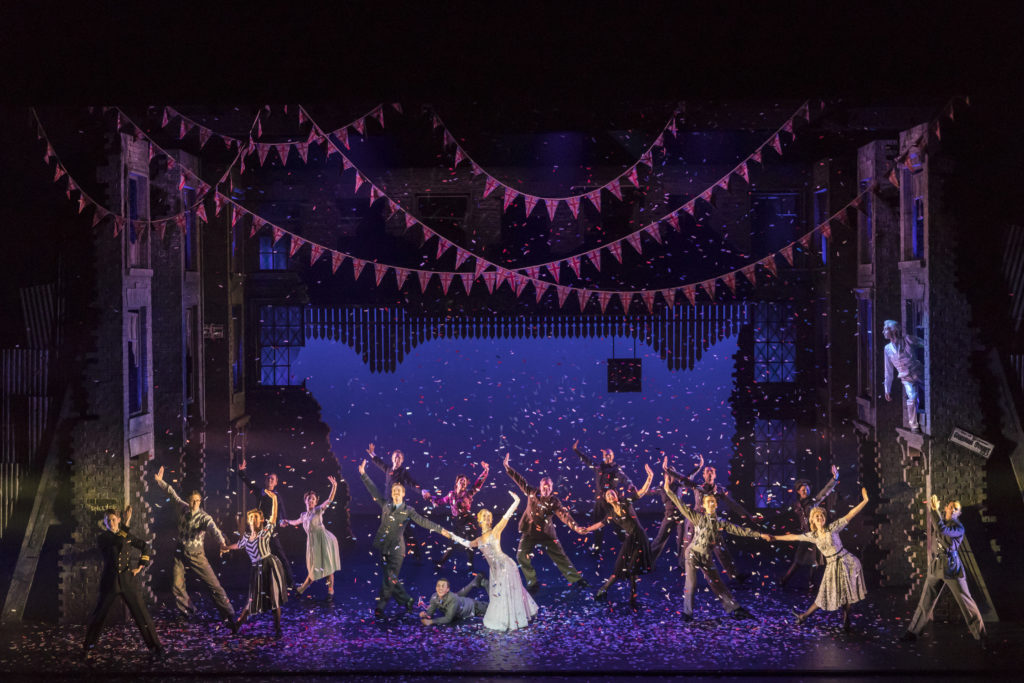 The company in Matthew Bourne’s Cinderella. Photo by Johan Persson. 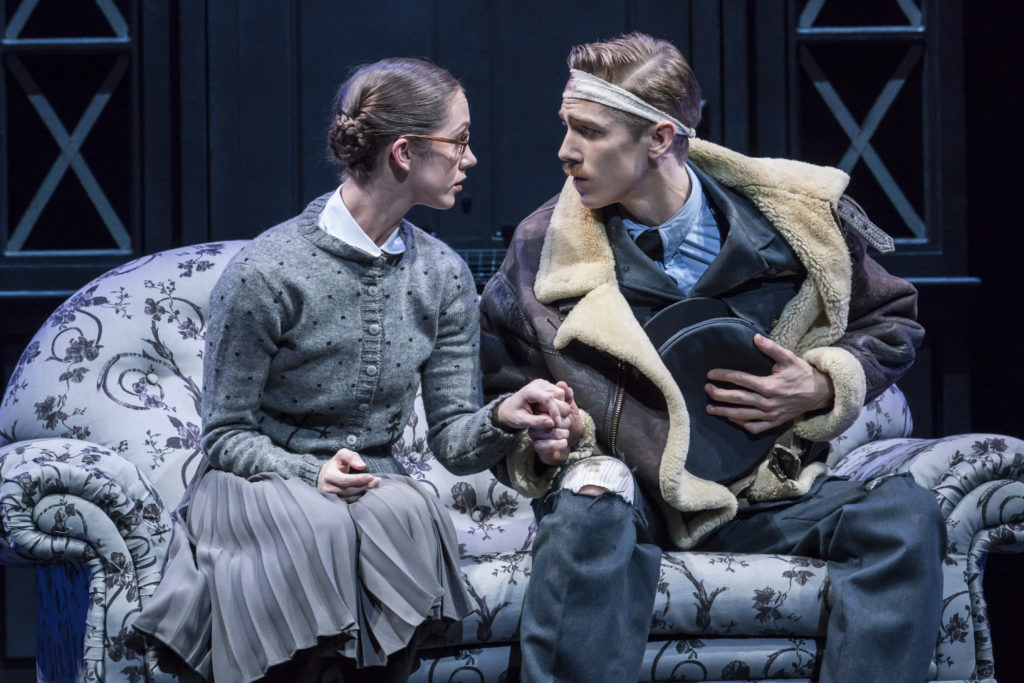 Life during a war such as this is something almost all of us can only imagine now that 78 years have passed, but Matthew Bourne’s direction and choreography brings out the humanity in characters that could have easily been rendered as a stereotypical trope.  The jealousy, greed, longing, fear and sadness that ultimately resolves in as close to a fairytale ending as one could hope for in 1941 finds our Cinderella saying farewell to her family [both step-sisters’ feet are intact –  that detail was left to the storybooks] as she boards a train with Harry for what we hope is a long life together ahead.  We know the bombs and terror and fighting and tears didn’t end for another four years so there’s a bittersweet tone in that moment that marries beautifully with the score.  If you have a chance to see this ballet – go. 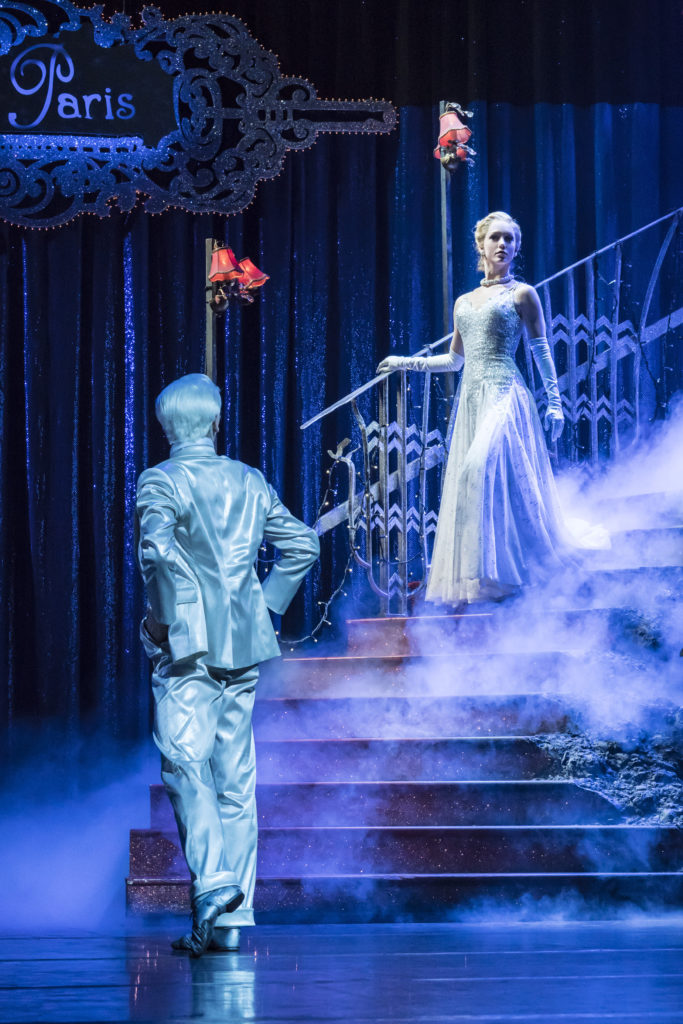