“Casablanca:” We’ll Always Have the Radio!!! 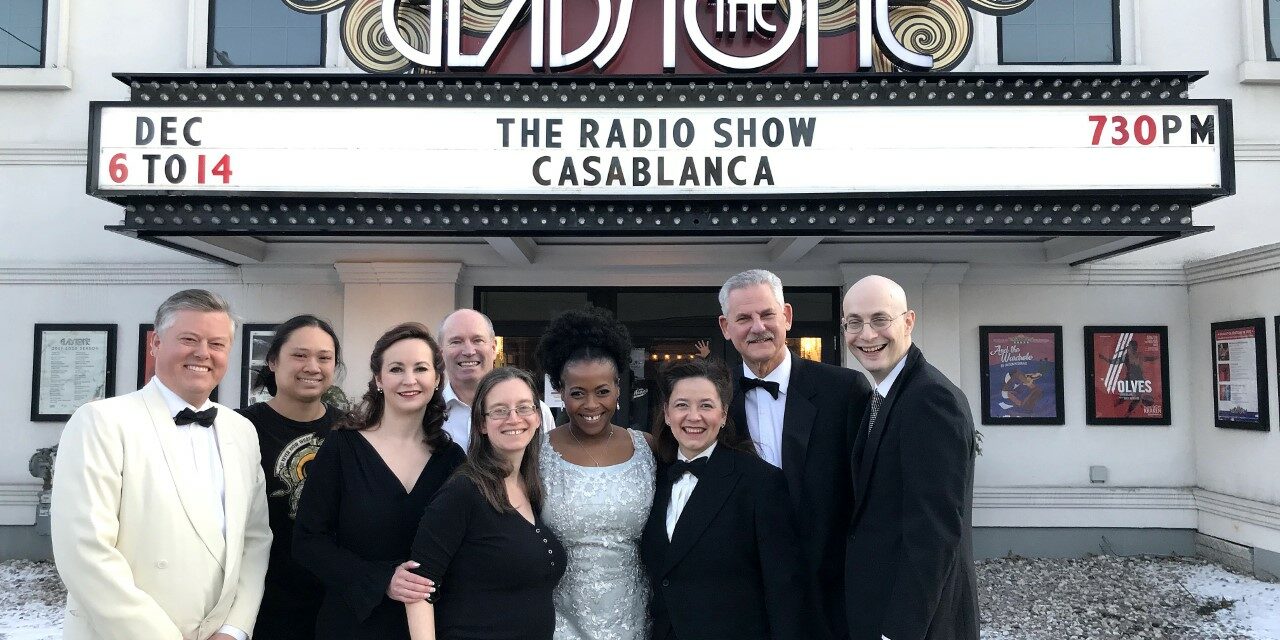 Gone are the days when, on a cold winter night, the family gathered around a fire to listen to the new radio play, gracing the airwaves at seven o’clock. In the Golden Age of Radio, this is what brought families together, listening to a new story, performed live on air,  filled with sound effects, music, and dramatic dialogue.

This December, audiences in Ottawa relived the magic of the radio through Plosive Production’s presentation of Casablanca: The Radio Show at The Gladstone. The radio show has become a time-honored tradition for the theatre, performed every December and this year was no exception, as Casablanca graced the stage from December 6th to 14th, immersing audiences in its classic tale of intrigue, lost love, and resistance.

Casablanca first appeared in Michael Curtiz’s Academy Award-winning film of the same name in 1942, starring Humphrey Bogart and Ingrid Bergman. Set in French Morocco during World War II, Casablanca follows the life of an American expatriate, Rick Blaine (played by David Gerow), and his nightclub, Rick’s Café Américain. In his nightclub, refugees, Vichy French and German military members, and emigrants gather each night, waiting for a way out of the city, to Lisbon, and from there, to America. Amongst those that flock to the nightclub, is Isla Lund (Michelle Leblanc), Rick’s former lover, who broke his heart. Isla is married to Victor Laszlo (Laurence Wall), a member of the Resistance, who is desperately seeking refuge in America. When two German couriers are murdered and the golden ticket out of Casablanca – two signed letters of transit – go missing, the perfect opportunity arises. But for who?

Adapted and directed by Teri Loretto Valentik, the show is an intimately staged performance filled with emotion and enchanting melodies. From the initial notes played on the piano (Robin Guy), the audience is immediately transported to French Morocco, enveloped in the strong voices of the actors. Valentik’s production succeeds through the cohesive nature of all of the sound elements and the passionate portrayals by all her actors.

Present onstage, almost a character in itself, is an almost 100-year-old foley box, a large wooden box used for film and stage productions to emulate common sounds, like a door opening and closing, a person walking across a room, and more. Operated by John Cook, the foley box gives the auditory-based production believability, deepening the story with every twist of the handle and slamming of the door. Cook adds a margarita shaker, pops balloons, and even blows a whistle at times, operating as “the man behind the curtain”, while completely in view. In addition to the live effects, the performance is underscored by soft piano melodies, and each major scene ends with a stunning vocal performance by Iyono Ede, who also plays Sam. Ede pulls the audience in with each beautiful note, creating a world for Rick’s Café and the life he longs to have.

The performances are the driving force of  the production. All actors flip between their multiple roles clearly and precisely, keeping the audience intrigued through each change in tone. Gerow as Rick, speaks with the energy and vocal attributes of Bogart himself, filling the room with his cynicism and mystique. It’s almost as if Gerow brings Bogart back to life through his spot-on take on the character.

Leblanc as Isla crafts a perfect transatlantic accent, reminiscent of Katherine Hepburn, transporting the audience to days gone by with her delicate voice. Robin Guy plays Major Stresser, the German military Major, and develops a thick, flawless German accent, which demands both the actor’s and the audience’s attention through her strong and impressive voice. Adam Goldberg plays a delicately tricky Renault, using his unique and deliberate vocal techniques to craft the perfect scheme. Laurence as Lazlo demands respect through his deep, powerful voice, acting as a man in love, and the voice of the Resistance. Sam sings the final notes of “As Time Goes By”  and the audience can’t help but fall in love with each and every character as the lights dim.

Plosive Productions staging of Casablanca: The Radio Show meticulously crafts an imagined production of a renowned classical film through a new medium. Through the actors’ detailed performances and the captivating auditory aspects, Casablanca is sure to keep audiences coming back year after year to experience the love of the radio.

This article was originally posted at capitalcriticscircle.com on December 16, 2019, and has been reposted with permission. To read the original article, click here.