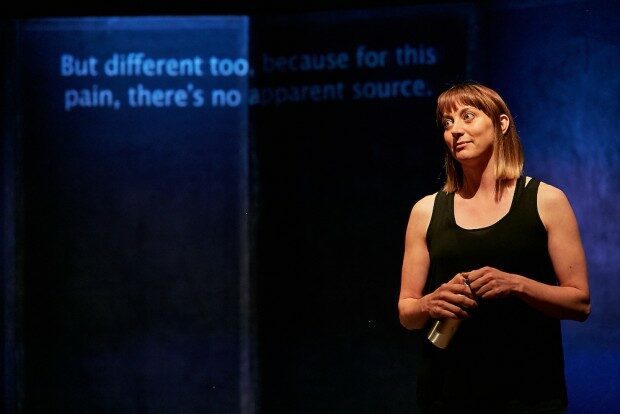 Hannah McPake in "The Shape Of The Pain." Photo: The Other Richard

Pain. A world of pain. Pain. For anyone suffering from a rare condition called Complex Regional Pain Syndrome (CRPS), a neuropathic condition which causes constant chronic pain, it is extremely difficult to communicate just how devastating this state of being is. People find it really hard to understand. So how can theatre convey the feeling of experiencing constant physical pain which has no apparent cause? This is the challenge that theatre-maker Rachel Bagshaw and playwright Chris Thorpe take up in this extraordinary one-woman show, which has already been seen at the Edinburgh Fringe Festival in 2017, at the Battersea Arts Centre, and on tour, and now returns for a very short run in London’s East End.

Bagshaw developed CRPS at the age of 19, after an accident, and has lived with the condition for a long time. Not only does she experience various degrees of chronic pain, but she also has a synesthetic response to its intensity, seeing and hearing it as colours and sounds, and this is, in her words, “a barometer of its effect on me at any given time”. At its worst, it feels like an out-of-body experience, an extreme sense of dissociation. In 2014 she contacted Thorpe, who is both a writer and associate artist at the Royal Exchange Manchester, and gradually they created this show which not only attempts to stage what is almost impossible to communicate, but also gives insights into how we might be able to understand — and relate to — another human being. Which makes the show about much more than just pain.

Although based on personal experience, The Shape of the Pain is a fictional narrative, and Bagshaw and Thorpe have decided to present it as a love story. Which gives it a universal rather than an autobiographical feel. The woman, brilliantly played by Hannah McPake, introduces herself at the start and explains that this will be an accessible performance, with the words projected on the mesh screens behind her, and that it’s about pain that has no apparent source. This sets the tone of the whole piece, which is caring and careful, and not in the least sensationalist or exploitative. It is an education; a story about how two people try and live together when one of them has a frightening condition. A condition that is hard to explain. So once we know a bit about just how bad things can be, we can appreciate the narrative of the 70-minute play.

One day, the woman meets a man, and takes him home for a night of sex, and, to her surprise, she falls in love with him. But how can they develop their intimacy, how can she communicate to him how her pain feels, and how can he understand it? At first, this is difficult: he tries one metaphor: it doesn’t work. She tries another, still difficult. But then love is often hard work, especially when you’re getting to know each other. So the play, which “is an experiment about how we talk about pain”, steps gingerly over these initial moments and then blooms into a really touching account of mutual understanding, with all of its ups and downs. After all, sometimes is just impossible to be understood. And we always might relapse into being utterly alone.

As you’d expect from Thorpe, this story is written with the kind of precision and flair that almost takes your breath away. Not a word is wasted; not a word is excessive. You never feel lectured at, although you do absorb a lot of information, and you never feel that the metaphors are redundant. When this couple agree on how to describe the shape of the pain it’s like a moment of bliss, despite the medical facts that underpin it. Thorpe’s minute descriptions of simple everyday actions, from holding a cup of coffee to sitting outside, build up a rare intensity. But what really makes the evening a riveting experience is Bagshaw’s direction, for China Plate theatre studio, which matches the words, their projection, with music by Melanie Wilson which creates another dimension to rational understanding by creating sound that goes hand-in-hand with the words and story, creating its own morphology of expression.

On designer Madeleine Girling’s bare but intimate set, which with the help of Joshua Pharo’s lighting (which with Wilson’s music gives synesthesia a real presence), McPake gives a performance whose effect is funny, serious, sad, touching, empathetic, even more funny, intense and, what can I say, loving. There’s no coyness; no excess. And, as she says, she has really expressive eyes. Even the most dramatic moments, when the whole set pulses with the overwhelming agony of confusion, or the passages of anger that plug passion into candid admissions of hatred (we’ve all been there), are perfectly controlled. McPake manages to make the feeling of feeling impersonal into a very personal journey. It’s heady stuff. Knockout.

What stays with you for days after you’ve seen The Shape of the Pain is not only the vivid sense of total theatre, but also the small exchanges and touches of tenderness. In some passages the feeling of being in pain is simply conveyed: someone grabs one of your hands and then the other hand feels acute pain, like it’s been plunged into boiling water. At other moments, the woman says her pain is mainly concentrated in her right knee. Being in pain is like being in a bubble, but it is also like a sharp triangle, and in colours, and trying to explain this strains at our sense of understanding another human being. I love the bits about telepathy, about the hate and the anger, about the doctor, about the memories, about the couple’s “sweet kind of trouble”, about the dazzling sections on “Have you tried…” (various cures). But in the end words fail me — I can never do this show justice. It’s simply too good for words.

This article appeared in Aleks Sierz on March 19, 2019, and has been reposted with permission. 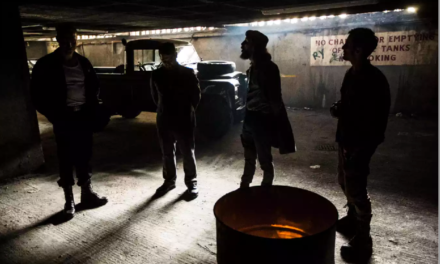