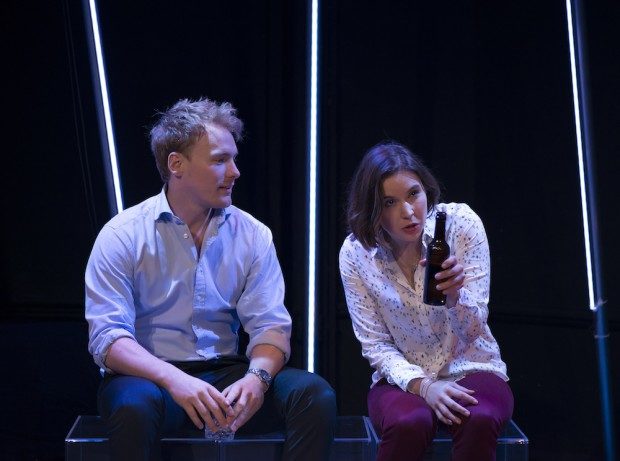 Young British writers are often surprisingly unadventurous when it comes to locating their plays in other countries. There are lots of plays that travel to sink estates and poor parts of town, but few that explore China, Mexico or South America. Plenty are set in the United States, but very few in Japan or South-East Asia. Fewer still in the Middle East, despite its political and economic significance. Which is odd since most playwrights must have traveled to at least some of these places. Maybe they feel that you have to live in a place before you can write about it. Not Carmen Nasr, who is British-Lebanese and whose second play, Dubailand, is a large-scale — almost epic — story about globalization and social justice, produced by the Finborough Theatre.

Set in Dubai, the glowing capital city of the United Arab Emirates, it tells two parallel stories: one is the conflict between two English twentysomethings, Jamie and Clara, who travel to the Gulf for opposite reasons. He is working as a PR for a Western property company while she is an aspiring journalist who wants to document the human rights abuses of the corporations building the apartments that Jamie is helping to sell. The twist is that they have known each other in the past, so their conflict is very personal. The other story is about Amar, an Indian migrant worker who is part of the workforce.

As is well known, Dubai is a place of gross contrasts. The shining skyline is resplendent with huge towers, the tallest buildings in the world, while a short distance away the desert lies mercilessly smoldering in the sun. If the Westernized inhabitants of the luxury flats live a life of hedonistic excess — an early high point in the play is Jamie’s description of a bacchanalian brunch — the workers have their passports confiscated, their pay docked and their hopes of union representation squashed. But hey, this is an oasis of free enterprise, with no taxes, no protests, and — for the workers — no justice and little hope.

The story about Clara and Jamie intersects with the work of his colleagues, Amanda, Tommie, and Deena, who exemplify the worst in Western capitalism. Although their brainstorming of an advertising video is intelligent in its manipulation of images of the Emirates, their essential callousness is revealed in their reactions to the death of one of the workers: they treat it like a joke. So while Jamie is torn between his better self, which Clara tries to encourage, and his professional persona, which Tommie attempts to embolden, it is Clara herself who becomes a moral problem. In order to research her article on how workers’ rights are ignored in Dubailand, she acts unethically. This means that her moral superiority is called into question, and it seems like Nasr is implying that PR professionals and investigative journalists are cut from the same Western middle-class cloth: they are all only out for themselves.

Dubailand has a great title, and some strong passages of writing. Amar’s vision of the city as an image of the future, glowing with a million lights like stars, is desperately ironic and the idea that the place is an unreal environment comes across well. These PR people are, after all, selling properties that haven’t even been built yet. Some of the imagery, such as that of the pigeon and the falcon, feels a bit forced, but that doesn’t matter. There is plenty of originality here (I liked the scene where airport security impound a chocolate bar because it has a marzipan filling) and there are a couple of moments of word association which playfully and evocatively tickle the intellect.

Directed by Georgie Staight, and designed by Bex Kemp on the platform set of Run the Beast Down, the play has a large ensemble cast led by Mitzli Rose Neville (Clara) and Nicholas Banks (Jamie), with good work also by Adi Chugh (Amar), Leon Williams (Tommie) and Reena Lalbihari (Deena). With a running time of 90 minutes, this is an energizing if slightly slender piece, which is nevertheless a real find. All hail the Finborough for putting it on.

This article was originally posted at http://www.sierz.co.uk. Reposted with permission of the author. Read an original post here.