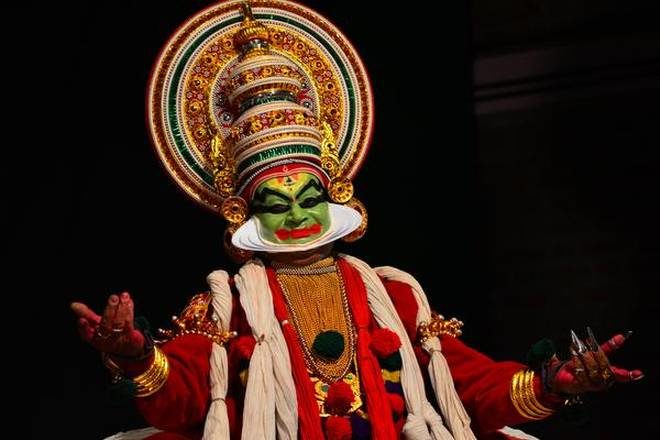 The staging of Nalacharitham Onnam Divasam in Palakkad had some pleasant surprises in store for rasikas, thanks to the innovative acting of the lead artistes.

Unnayi Warrier’s Nalacharitham Attakatha is one of the most popular of Kathakali plays because of it’s lyrical beauty and possibilities of acting and singing, and has been so for at least a century now. Stalwarts such as the late Vazhenkada Kunju Nair, Kalamandalam Krishnan Nair and Mankulam Krishnan Nambuthiri were legendary artistes who contributed to its popularity.

The first part of Nalacharitham Onnam Divasam was performed at M. D. Ramanathan hall, Palakkad, recently. Kottakkal Chandrasekhara Warrier performed the lead role of Nalan. Warrier eased into the performance with the depiction of ‘Bhagaval narada vandeham..,’ in which Nala meets saint Narada. Though Warrier’s forte is Kathi characters, his mannerisms and expressions for a romantic hero were spot on. His enactment of the famous padam ‘Kundina nayaka nandinikkothoru pennilla…’ was an example to the new generation of artistes, for its skilled presentation and perfect editing. He also excelled in the elaboration of Damayanthi’s beauty. His short manodharma attam was well focused.

FACT Padmanabhan enacted the role of the golden swan. Padmanabhan, a versatile actor, who specialises in this role, enthralled the audience with his old-world footwork and mannerisms, which are slightly different from the norm these days, especially in the scene with Nalan and Damayanthi. Padmanabhan follows the style of his legendary guru, late Kalamandalam Karunakaran, who also specialised in this role. This time, he also added elements from the acting style of Kalamandalam Padmanabhan Nair, another maestro who excelled in this role. Padmanabhan, who is rather short in stature, also exhibited some variety kalasams [dance] in between the performance, which the audience found interesting.

Kalamandalam Vijayakumar [Chambakkara] essayed Damayanthi in all poise and grace. From the ‘saari nritham,’ which marks the entry of character itself, he sustained emotion of the character throughout. Kottakkal Pradeep (Narada, Sakhi) and Kalamandalam Praveen (Sakhi) were the other artistes.

Vocalists Kottakkal Narayanan and Vengeri Narayanan, with the support of Abhijith Warrier, made the padams their own with a few interesting surprises here and there.

Kalamandalam Balaraman, another veteran artiste, played chenda, with proper balance and rhythm as did Sadanam Bharatharajan on the maddalam. Kalamandalam Abhishek and Kalamandalam Unnkrishnan were the other percussion artistes.

This article was originally published in The Hindu. Reposted with permission. Read the original article.