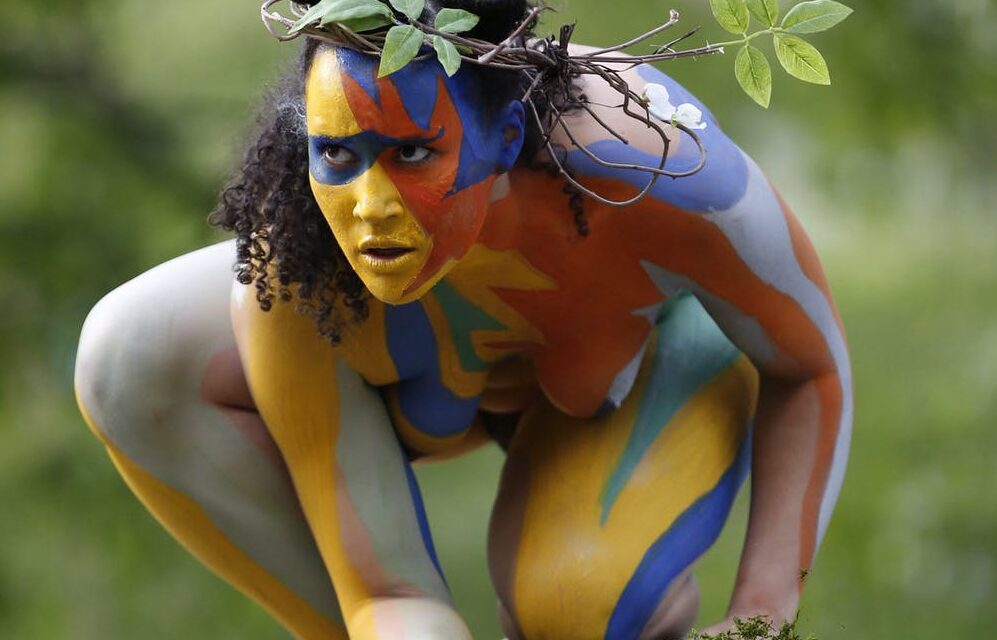 Last winter, at the Studio Theatre at Ryerson University in downtown Toronto, Canadian actor Antoine Yared played Caliban in The Tempest. He stood, centre stage, looking out over the audience as he reassured his companions that the magic music of the island should not frighten them. He said:

“The isle is full of noises … that give delight and hurt not.”

But his face told the audience a different story — the story of a man heartbroken for what had been taken from him.

We chose Shakespeare’s The Tempest as the centrepiece for our “Playing for Free” workshop because the play has been entangled with the history of slavery and freedom in the west for over 400 years.

The Tempest tells the story of the Duke of Milan, Prospero, who many years before had come to the island with his infant daughter. Upon arriving, Prospero enslaved two of its inhabitants, Caliban and the spirit Ariel. The play follows three interconnecting plotlines: Prospero’s revenge plan against his enemies; how his daughter, Miranda, falls in love with the son of his chief enemy; and how Caliban plans to destroy Prospero and take back the island.

Many consider the play an allegory of European colonization, and throughout the centuries, Caliban’s character has featured prominently in arguments that defend or resist against colonialist tyranny.

The Tempest has also been interpreted as an allegory of liberation. The 20th-century writer Roberto Fernández Retamar declared that the insurgent Caliban spoke for the colonized peoples of the Americas. In 1993, a production by Robert Lepage in Montréal portrayed Caliban as a working-class punk-rocker in open rebellion against the elite Prospero.

The Tempest and religious conversion

The workshop brought together four Stratford Festival actors, three student actors from the Ryerson Performance Program and Renaissance scholars from an international initiative dedicated to understanding how Shakespeare’s work helped create the world we live in now.

The artists and scholars worked for a day and a half toward the performance. We talked about the history of slavery and freedom, primarily by thinking about how Christian conversion had served colonization. Indeed conversion has been an instrument of domination in the Americas from 1492 and onwards into recent times.

Forced conversion haunts the play. But there is another kind of conversion in the play where characters achieve the freedom to be true to themselves.

Caliban: Searching for the Other

Prospero attempts to strip away Caliban’s dignity. Prospero forces him to remain “stied” in a hard rock. In the Ryerson performance, Antoine Yared playing Caliban chose his first moments on stage carefully. Rather than obeying Prospero’s commands to “come,” he walked past Prospero, his back turned in a sign of his rebellion. For Caliban, even the act of walking around the Island, his home, was now charged with submission or defiance.

When Caliban encountered the shipwrecked servants he would recruit as co-conspirators against Prospero and when one of them fed him liquor, Caliban thought he had at last come face to face with God. He said to the drunken servant:

“Hath thou not dropped from heaven? … I prithee be my god.”

But when the invisible Ariel began to make her magical music, the two servants quaked in terror. They knelt at Caliban’s feet. Caliban rose up — straight and fine like a young tree. He stood triumphantly over the two trembling servants. The music was something he knew well. It was nothing to be afraid of.

“Be not afeard; the isle is full of noises,

Sounds, and sweet airs, that give delight and hurt not.

Will hum about mine ears; and sometime voices,

That if I then had waked after long sleep,

Will make me sleep again: and then in dreaming,

The clouds methought would open and show riches

Ready to drop upon me, that when I waked

I cried to dream again.”

That was in rehearsal. But when Yared played Caliban in front of the audience, he changed the way he did the speech. His lines about the music of the island were no longer triumphant. They were something that could break your heart. 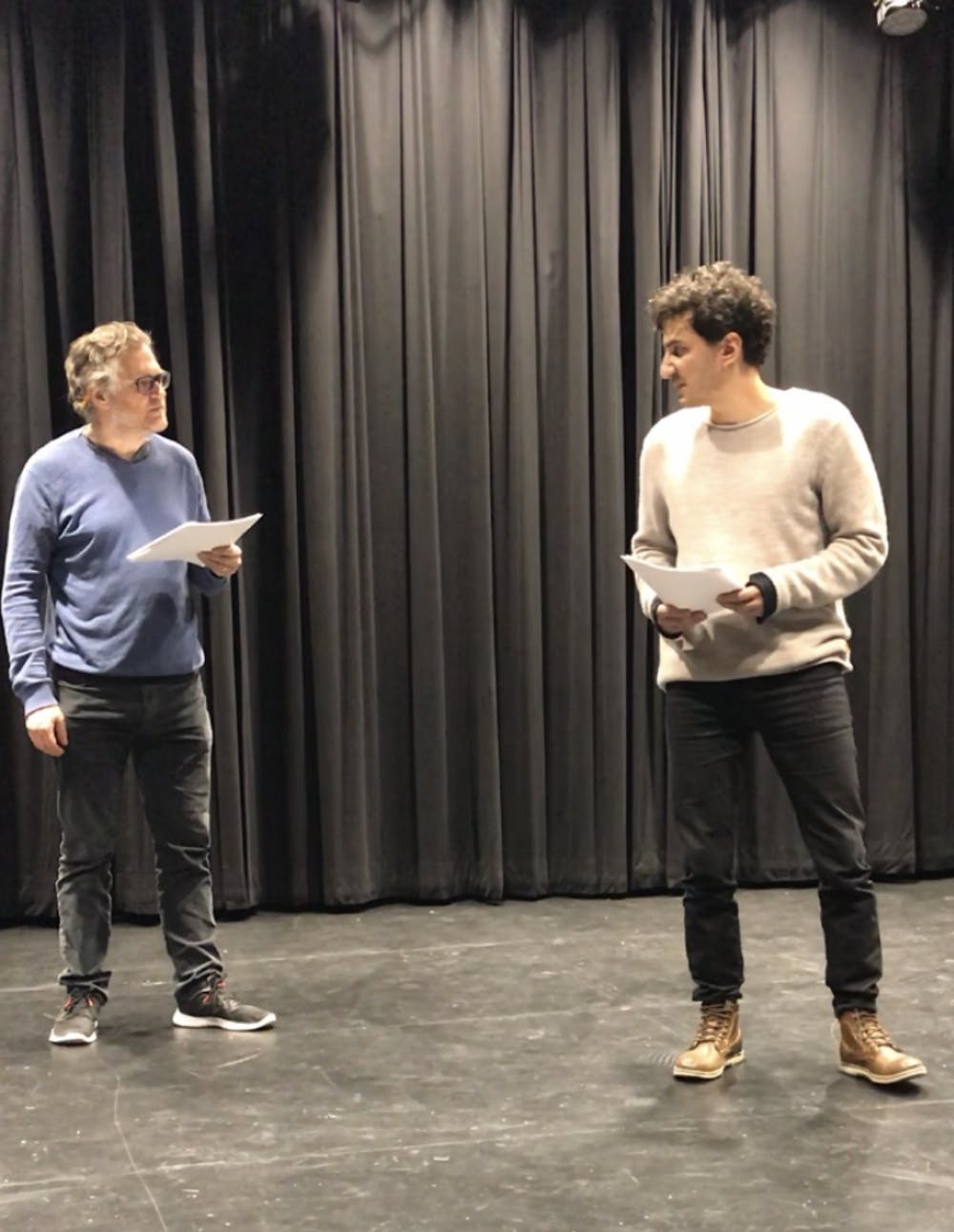 At the Ryerson performance in Toronto, Antoine Yared as Caliban chose his first moments on stage carefully. He walked past Ben Carlson as Prospero, his back turned in a sign of his rebellion. Author provided.

Yared’s Caliban was a man who had once been at one with the natural world, but who had been cast out and could only recapture some sense of the beauty of nature by dreaming. When he said, “I cried to dream again,” it was as if he were a man turning and turning, trying to find the beloved he had lost.

The workshop taught the actors, the scholars and the members of the audience how the play The Tempest, with its depiction of slavery, resistance and love might have challenged people of the past to see Caliban’s humanity and might also speak to audiences in the 21st century.

Yared’s Caliban left us with this urgent question. It was as if he were echoing Ariel and asking the audience:

“If you have eyes to see this suffering one, if you are human, your affections would become tender.”

This post was written by Paul Yachnin and Hannah Korell. 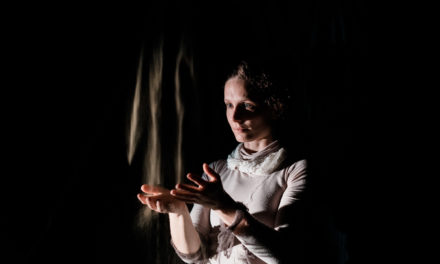