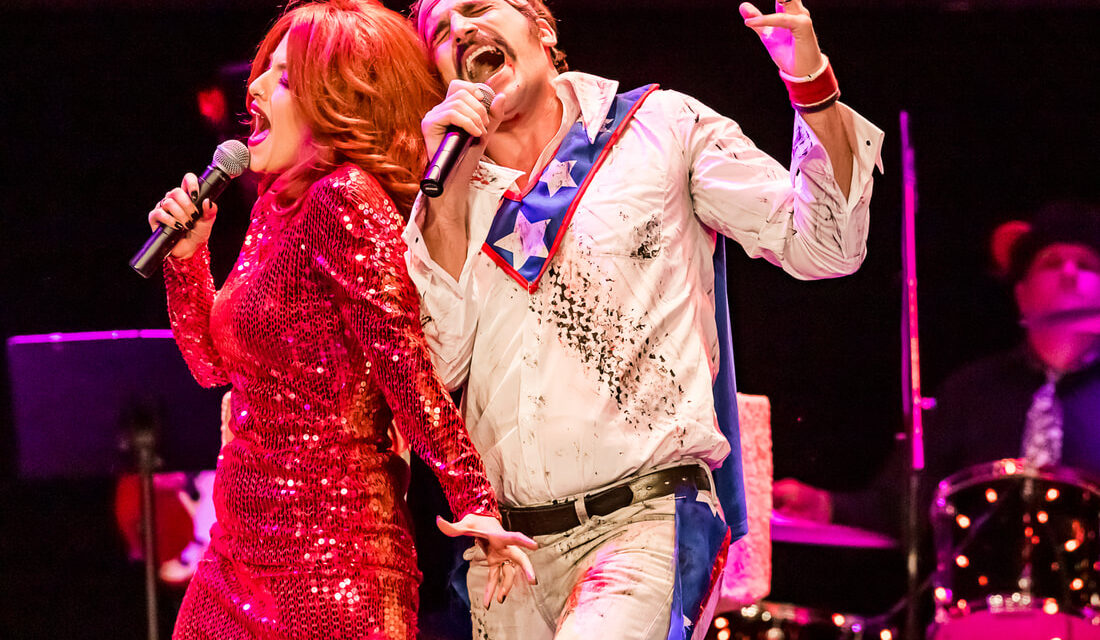 One of Boston’s long-running interactive theatrical events, now featured routinely at the American Repertory Theater’s OBERON theatre in Cambridge, Old School Game Show is a madcap throwback to the game shows of the 1970s, such as Family Feud, Match Game, The $10,000 Pyramid, and Let’s Make a Deal. Like those shows, Old School Game Show attempts to match challenging trivia and prizes with splashy spectacle. So, in addition to a series of trivia-related games (played by the audience members themselves), it also features a live band, a trio of performers called the Cubic Zirconia dancers (Jolie LaVie, Wisty, and Belle Gunz), and character-based comedy akin to a raunchy version of The Carol Burnett Show.

Old School Game Show is driven by its wild, frenetic, and unhinged host, Mike D’Angelo. Sporting a thick mustache and robust sideburns, the host comes across as a wild and frenetic cross between Andy Kaufman, Bert Reynolds, and half a dozen characters you might have seen in Adam McKay and Will Ferrell’s hit comedy, Anchorman. Fellow characters describe D’Angelo as “layers of screaming and sweat, a human muppet,” and even that feels like an understatement. When he is introduced by the smooth baritone voice of the announcer Will Smalley, D’Angelo gallops through the aisles of OBERON, high-fiving, fist-bumping, and roaring with unbridled enthusiasm. Even though he promises in his opening monologue to “keep it cool,” he quickly devolves into a diatribe about his fears of dying alone, devoured by his pets.

As raucous and volcanic as D’Angelo is, he hooks the audience immediately. There is something pathetically likable about this raw display of loud masculinity. He’s a man who tries too hard. He will do anything, and I mean anything, to keep us interested. At one moment his strips into a leotard (in honor of his idol, Patrick Swayze) and accidentally rips off the soul of one of his shoes. This small incident is the character writ large. A simulacrum of better men, his desperate attempt to fill those shoes, instead, tears them apart.

In this role, he effectively serves as a virtual punching bag for a cast of characters who frequently intrude and disrupt the game show. A band of broadway singers burst onto the stage and narrate D’Angelo’s actions through song. His sister, Peaches D’Angelo (played by executive producer Ginny Nightshade), joins him in a series “unintentionally incestuous” songs. An eccentric billionaire Chance Branson (Sumeet Sarin) offers D’Angelo an indecent proposal: “Sleep with me and I’ll give you a million dollars.” D’Angelo’s over eager acquiescence disgusts the billionaire who leaves D’Angelo in disgrace. A longtime critic of the Old Show Game Show, Linda (personified by head writer Kaitlin Buckley) chides the host for his vulgarity and flim-flam.

For better and for worse, the whole show rides on D’Angelo’s shoulders. He is funny, brash, and unpredictable. He keeps the show moving, and connects with the audience with clever repartee. Yet, given the show’s length and demand for high energy, D’Angelo at times appears gassed and in need of a break. He manages to collect himself, but because he features in every single sketch, song, and game, the show could be strengthened if some of his responsibilities were doled out and shouldered by someone else. He needs a sidekick, a second banana.

While there is plenty to see here in terms of music and comedy, the game show itself is a delight. It is clever and fun to play. The show runners have created a series of unique and irreverent games such as “Stiff Drink, Cool Nicks, and Dick Tricks,” wherein the audience members have to guess if a phrase like the “Read Headed Stranger” is the name of a drink, a nickname for a celebrity, or a reference to a grotesque sexual act. Another game features a space erotica writer, Barn Hamlin (Ethan Marsh), who reads favorite passages of his work, which happen to describe the plot of popular movies (albeit in a bizarre, circuitous way). Old School Game Show awards the winners with prizes from local businesses, including event tickets, discounted tattoos, and gift certificates to restaurants, and the audience members seem genuinely invested to the point that they are cautioned to avoid shouting out the answers.

There is nothing else quite like Old School Game Show in the city of Boston. With a high dose of camp and interactivity, it approaches comedy and entertainment as a war of attrition. It strives for a high-density of jokes and laughs, throwing everything at you with as much energy, enthusiasm, and force as the cast can muster. Coupled with the nostalgic vibes, the intriguing trivia, and the format’s high potential for repeat visits, Old School Game Show hopes to continue as a longstanding tradition in the Boston community.