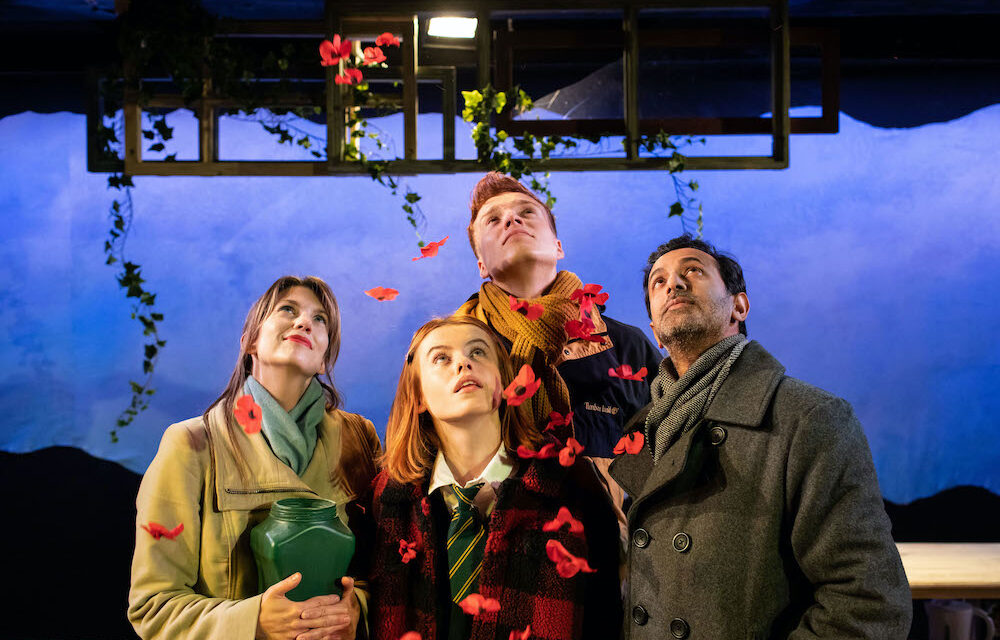 Claire Goose, Rosie Day, Will Fletcher and Navin Chowdhry in "The Girl Who Fell." Photo by Helen Maybanks.

Feeling guilty can be a drug. A powerful drug. Okay, it makes you feel bad, but at the same time, it’s an assertion that it’s your bad. Something personal. Something shameful even. In this way, guilt can be a method of control, of controlling pain. And there is nothing quite so painful for a mother than the death of her child. In Sarah Rutherford’s strongly felt new play, which is produced by Stage Traffic theatre company, guilt is only one of the many emotions explored in a story about sudden death, mourning, co-incidence, conflict, and eventual healing.

The plot begins about three months after the death of Sam, a bright 15-year-old teen who committed suicide after being publically shamed on the internet. Apparently, her mother Thea cut her hair off in exasperation after an argument and videoed this punishment. After this was shared on the internet, Sam threw herself off a local bridge, landing on the roof of a car far below. Thea, who once worked as a prison chaplain, is now deep in mourning, unable to work or to do anything apart from asking herself the inevitable questions: why did she do it? Was I solely to blame? Guilt has eaten up her soul.

But Thea is not the only one affected by grief. Sam’s best friend Billie and her twin brother Lenny are the same age as Sam and their feelings are raw and confused. Lenny was Sam’s sort-of boyfriend in a naively teenage relationship which is beautifully imagined in its coyness and near-innocence. But neither he nor his sister can adequately explain to Thea why Sam acted as she did, nor answer this mother’s burningly insistent questions about blame and guilt. Over the course of this 100-minute domestic drama, both of them reveal the kind of teenage secrets that any parent might dread.

The fourth person in the story is Gil, apparently a consultant anesthetist at the local hospital, who bumps into Thea in a hipster coffee shop. When his connection to the reason for Thea’s mourning is later revealed, the enormity of the coincidence is a bit breath-taking and is in sharp contrast to the more realistic aspects of the narrative. Still, he is as fully realized a character as the others in the play: a troubled, addictive personality whose behavior suggests that we might somehow hang on to the bad stuff in our lives because it’s much safer than challenging it.

As an uneasy rapport develops between Gil and Thea, with Billie and Lenny also popping into her house, a complex picture of raw emotion builds up, refracted through the contemporary prism of the digital world. Ethical issues about parenting, seeking advice on the internet, and public shaming graze against older feelings of jealousy, loyalty, and betrayal. And mourning. Despite the devastating reality of a teen suicide, Rutherford’s text is serious, but not depressing. In the face of adversity, her characters make jokes, argue passionately with each other, and, in the case of the teen twins, behave in an entertainingly uninhibited way.

The playwright deals with all of this with an enviable lightness of touch, although she also is unable to resist the temptation of packing the story with more issues than it can comfortably hold (the jobs of both adults suggest religious belief, medical care, and institutional safety, but this is hinted at rather than fully explored). At various points, other forms of public ostracism—the dumping of shorn hair on Thea’s doorstep—are shown, but likewise not developed. And the same could be said about addiction. And motherhood.

Yet there is much to enjoy in Hannah Price’s sensitive and well-paced production, on Georgia de Grey’s initially cluttered set, whose windows and partitions are gradually deconstructed during the performance. In this small studio space, everything depends on the actors, who all deliver convincing performances: Claire Goose’s Thea makes the journey from controlled depression to some sense of healing with great skill, while Navin Chowdhry’s Gil conveys a feeling of repressed energy. As the twins, Rosie Day and Will Fletcher have an excellent mixture of gaucheness and brightness. The result is a believable and heartfelt account of a contemporary tragedy.

The Girl Who Fell is at the Trafalgar Studios until November 23.