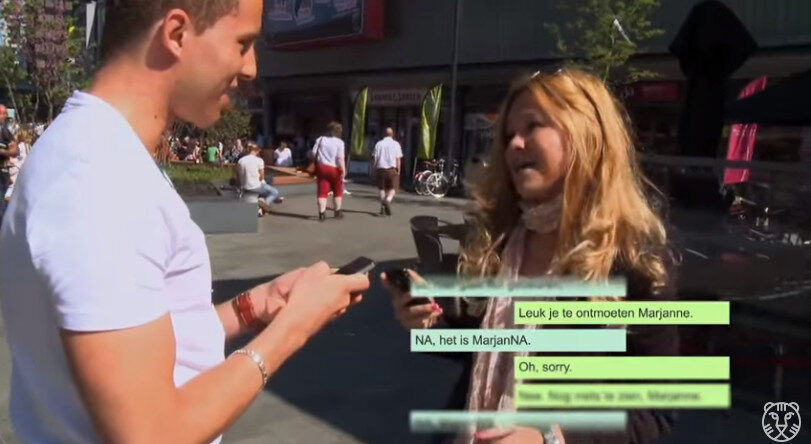 Sander Veenhof is a hands-on futurist, creating interactive experiences to explore scenario’s for a speculative but highly probable future. He has already exhibited his work in MOMA using AR, and he is continuously experimenting with AR, VR and their possible combination in performances. A conversation with Sander Veenhof about creating new human connection with apps, AR, VR.

What was your first experience using new technologies in your performances?

Seeing Crew was my first immersive experience. It was before the time when augmented reality existed. The question is difficult, as there are a lot of different genres: light– immersive, semi-immersive. It is hard to say when technology starts to play a definitive role because technology is all around us. We have always used technology but the main difference now is that technology can fit in your pocket.

You were saying that much of the equipment you use is heavy, so we should use less, but you were emphasizing the mobility of the new technological tools.

For a specific type of work yes. You cannot beat the ‘immersiveness’ of a huge machine. At the same time, you can have one machine, or you can have thousands of people experiencing it on their own mobile phone. A lot of the actual performance happens beyond the screen. People interpret their environment but they also move within that environment. A really abstract augmented reality project that I did was a dance project called Global Choreography. When you looked around the room, you saw a tiny cube floating around your head but this one cube was floating around you in a synchronized way with all the other people around the world. But this synchronization meant that if you stretch out your arm, someone else is doing the same thing somewhere else. It was like a global synchronized flash mob.

You mentioned that this is more than an environmental thing: that this is only a tool, but the dramaturgy has not changed.

I mentioned this because I think that technology is not just a tool to make certain things more efficient—it doesn’t cause a radical change. But I think it does bring about some change. The topic can be different; if you do a performance about technology in our daily life, it means that that becomes the main content and if you do that through technology? There is even a new concept of space that is played by someone in the audience. It is not only about giving people scripts. Nowadays technology gives you a lot of data, and if you connect this data, if you put the data in a certain context then you change it a little bit. Data is producing objects.

Nick Tandavanitj from Blast Theory in a previous interview was talking about the app Karen, and he told me about how cautiously they used the data they gathered. There is less and less privacy, and this also valid for the art professionals.

Of course, at the end, you have to address these issues, but right now you often see people not really thinking about how they use data. Personally, I think they are not concerned. As an artist, I’m not there to solve their privacy problem. I see we need a lot more artists to create works; let’s fix the privacy later on. We need more things that are imaginative, amazing things. There can be a privacy issue on anything but just collecting a bit of data from somebody on this scale, should not be a problem. That’s the problem with technology, it tracks a lot of different reactions from a lot of different people, and a lot of different people react on the actual content. They don’t value the good or bad effects of technology; they forget to look beyond that.

You are not concerned, not even for your own data?

I think we should be all concerned in sort of the same way that you need to have more data awareness in order to know what is going on. Instead of just saying “no” to everything, you need to familiarize yourself with those technologies. If you are not informed, you cannot make good decisions and you won’t have good arguments. That is what can be attained, by encountering more data-orientated experiences.

Do you have any key example about this?

For example: Stalk Your Stalker project, which communicates the GPS-location of the viewer of the augmented reality to a platform for stalkers, so they can send messages as if being a connected personalised stalker, by looking at the 360 Google Streetview map. This kind of work brings privacy issues to the surface. They are unaware that they can switch this off.

Do you think that new technology will alienate people from each other, even if at the first glance they seem to be “connected”?

This is true, but this is also because people lack the choice; they don’t come across new things because these platforms are so popular that they appear on every list. I am working on a new system that is called appherenow. We are trying to offer the right app in the right situation. For example, when you are sitting in a car you might use a certain app they want you to use because that is the most popular app for parking. But if you want something joyful to happen, you can’t choose for example an augmented reality app. People use Facebook and Whatsapp all the time but those make people more isolated from each other. You are connected to the world but you are not connected to the moment.

Which app is your favourite?

I like the app that was developed by people who work in the theater, Meet Your Stranger. The idea is that you are an architect in Amsterdam. You meet people that are important in that person’s life and you have a short dialog with them. You get to know about the architect in a very immersive way. You could meet their spouse or also have a dialogue with the architect and their space, as space also has a voice. I really appreciate this because users are very aware of the context. The app doesn’t isolate people because it brings total strangers together. I think that can be used effectively in a lot of ways. The phone can be used for more than just a remote control. Those stories are hanging in the air.

What do you see as a possible path for theatre, how do you imagine it in 20 years?

I don’t think that the whole performing arts is going to change. There will be more possible ways to present a play. Not every play is better with more technology, but you will have more options in the future. Once you have technology in place, other things can start changing. For example, staging the audience can change. There might be no stage. It could be a public space. You could even skip some of the essential elements of theater like forgoing real actors in lieu of the audience, which is something that was done in decades prior. Now thanks to technology people can get into a play together whenever they feel the need, or want to. The whole world of theatre will be able to reach in many different directions.

Your next project? Are you also working with museums?

I did that with augmented reality because then you really use the space of a museum. I once even had a piece in MOMA, but they were unaware of it; we just had our own exhibition there. But still using the museum context to show augmented reality is helpful because people have the right mindset and concentration. There is no need for a nice environment in a museum, you can exhibit your work anywhere. In recent times I was working less with museums, but I was more focusing on creating a mobile situation to be used in public spaces. My work is really to use technology, to tell stories to connect people so as to add a parallel universe to our physical reality—to make this parallel world more visible and to use it more meaningfully.

Why is that the museums are much more ahead in digitization and virtual reality?

A lot of museum are like shops, artists finish a “project” and put it inside the museum. In theatre, it is not possible to create things and see if the theatre is ready for it. You have to seek out the right people, the right time for it, as well as find financing. You also have to convince people to use technology, which is very difficult with theatre-goers because normally they don’t want to use technology from the outset. They think about a story, but they don’t think about technology. Sometimes it becomes an add-on, not something fundamental to the whole experience. There should be a Blast Theory in every country. But I have to add, that using technology in performances also slows down the experience: the number of people that you have to pursue to take part in it is slowing the process. And of course there is scepticism too; people want to hold back. And skepticism is there because they are unaware of the real potential of technology. This needs to change.

But you don’t want to get into a certain compromise. If you partner with a writer and a technician, it won’t necessary work out well. If they aren’t willing to compromise it could be a problem; if they are willing to see the value of the person’s work it could be good. Coaching can be a good strategy, but matchmaking is more important. For cooperating, they need to skip the functional thinking. Irrational thinking can sometimes be useful for a play.

Do you think there are out new tech professionals who would have great ideas, they just don’t know the right people?

It is also a matter of time. It’s a nightmare to get technology to work… In the end, the technician is busy with the technology, he has no time to think about the story. You need someone else to interfere. And this is where theatre people should come in.

Interview realized with the support of IETM.

This article was originally published on Zip-scene.com.  Reposted with permission. Read the original article. 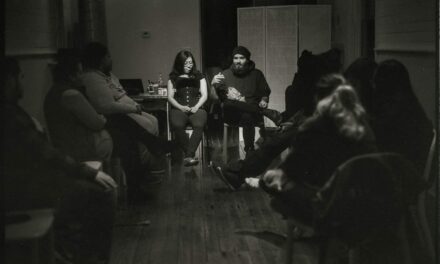 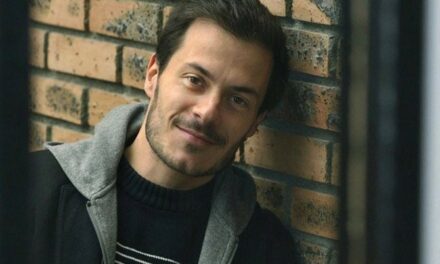