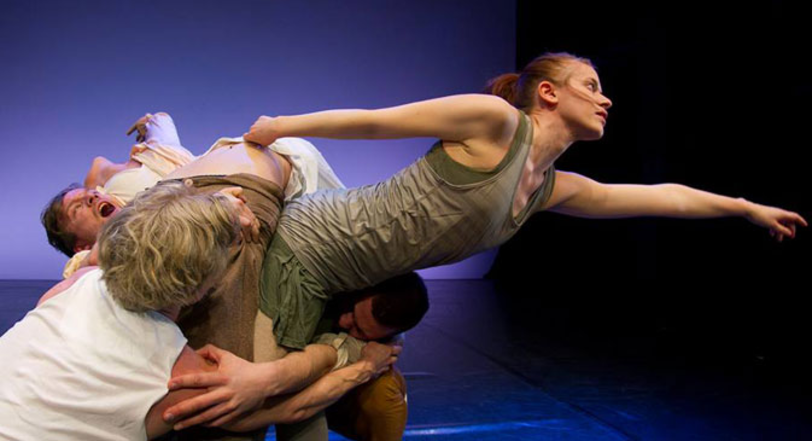 The festival started in St. Petersburg on May 22 with the theater performance “The Memories of Life.” Source: Press Photo / vk.com

A theatrical event that recently kicked off in St. Petersburg is to set sail on an unusual voyage. On June 1, the participants in the Meeting the Odyssey Festival will board the sailing ship, Hoppet, for a three-year journey around Europe by sea and river.

A cultural event that recently began in St. Petersburg is to set sail on an epic voyage around Europe’s seas and rivers.On June 1 the sailing ship Hoppet (“Hope” in Swedish) will start her three-year theatrical journey from Russia’s northern capital.

Hoppet has a special mission to unite Europe with the help of art of theatre. Every time the ship docks in a new country a feast of theatre will take place there – street performances, workshops and lectures will be given by theater directors, actors, playwrights, choreographers, and musicians. The organizers have named the voyage Meeting the Odyssey, and their hope is that this theatrical voyage will become as full of event and adventure as the original Odyssey.

The festival started in St. Petersburg on May 22 with the theater performance The Memories of Life by the Finnish theatre Viirus at the Skorohod art space. The performance will run until June 1, when the sailing ship Hoppet will set off on its voyage around the Baltic together with actors from Denmark, Finland, Estonia and the Czech Republic.

Meeting the Odyssey is the brainchild of Matilda Sundström, a theater producer from Finland, and Italian art director Michele Losi. The duo came up with the idea of the project three years ago when the consequences of the economic crisis hit the South of Europe.

“In this hard time we decided to make a project that can unite people from different parts of Europe,” says Losi. “The only thing that people were talking and thinking about back then was money. We wanted to talk about something less material than money but at the same time about something important for all the Europeans, about something that links the South and the North.”

“We all are kinds of Odysseys and stay in the same boat. The purpose of the festival is to show that we all have the same roots,” adds Matilda Sundström.

Matilda and Michele shared their idea with Alexander Weinstein, director of the Skorohod theater space in St. Petersburg. Weinstein liked the idea and decided to participate. “What I like the most about this project is that it came from a dream and became true.

It was just a crazy idea of this traveling ship, a dream, but it happened to us and you see miracles are possible. And if we could do it, to make a reality of our dream, then anyone else can. I just hope we inspired people to go for their dreams,” says Alexander.

Giancarlo Biffi, an Italian theater director, playwright, and producer, will also board the Hoppet this summer; he will be responsible for the street theater performances.

“Theater cannot develop inside one nation only, it needs more space, it weaves a canvas, entwisting feelings, making a song out of barely heard voices from the oldest times. That is why I think that the project is great and I am glad to become a part of it,” says Biffi.

Next summer Hoppet is going to sail around the Mediterranean with the Russian theater Lyogkie Lyudi (Light People) on board, run by young theater director Tatyana Priyatkina. The plays that Lyogkie Lyudi will perform have no words, but the expressive movements of the actors will remind spectators that we all have a common language and there is always the possibility of reaching an understanding.

There is no any exact plan for the summer of 2016 yet, as organizers say that it is a bit too far away to understand who will be on the Hoppet over the next two years. However, the route has been determined – she will sail around the Aegean Sea.

During those three years of travels Hoppet will visit Tallinn, Opole (Poland), Berlin, Prague, Copenhagen, Genoa, Malta, Sardinia, Montpellier, Florence, Corfu, Athens, and Rhodes – and this is only part of the list.

Matilda Sundström sees the Meeting the Odyssey project as an original artistic and social initiative that can bridge cultures and unite different regions of Europe.

“The participants will be experiencing their own personal odysseys, and they will bring their lives and thoughts into a unique and memorable journey. The project will affect also the people of the different places, as there will be the workshops and of course the performances in each port,” she says.

“The project is special because it genuinely mixes the different countries and cultures, and it strives to combine South and North, East and West.”

This post originally appeared on Russia Beyond on May 28, 2014 and has been reposted with permission.