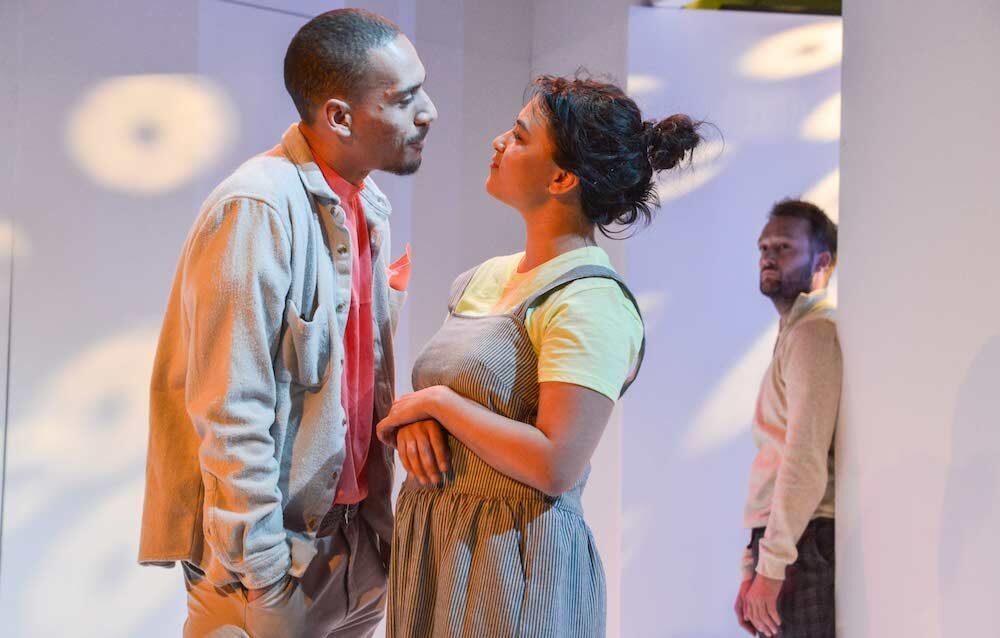 Gabriel Akuwudike, Isabella Laughland and Patrick Knowles in "Either." Photo by Robert Day.

Once there were radically innovative playwrights; then came university courses about radically innovative playwrights. In this way, the breakthroughs of one generation have been handed down to another, with imitation being one way of soothing the anxieties of influence. In the past, the main influencers of young playwrights were Samuel Beckett and Harold Pinter. Today, it’s more likely to be Caryl Churchill, Martin Crimp and Sarah Kane. So the first thing that strikes me about young playwright Ruby Thomas’s intriguing debut is that it’s an open text, written in the long shadow of those big three theatrical forces.

Imitation is less a form of flattery than an acknowledgment that you have to start somewhere, and Thomas’s embrace of the open text—a form of writing in which lines of dialogue are not ascribed to one single character but can be spoken by almost anyone on stage—is a good place to begin. And this form of writing certainly suits the subject of Either, which is gender roles and how they are experienced in a sexual relationship. Looking at the program note, which argues that gender roles are both socially constructed and affected by hormonal surges, it is clear that the open text is a good way of making this insight work on stage.

The play’s plot is very simple: two people meet, in a chance encounter at a Pride march, then meet again, then fall in love, then decide to live together, then argue about infidelity and then finally break up, despite having had couple therapy, and so on. In the text, the two lovers are called A and B, and the only other characters who have a few lines ascribed to them are a casual pick up, a shopper, an airline passenger, and the therapist. On stage, director Guy Jones uses a cast of six, two men and four women of diverse backgrounds, to tell the story, so that, at various times, we see the lovers as a heterosexual couple, a gay couple and a lesbian couple.

To begin with, A and B are played by Gabriel Akuwudike and Isabella Laughland, him brazenly confident, her rather gauchely bright, and then her role is taken up by Patrick Knowles, whose character is timider. So it continues for about the first half of the 70-minute show, with the other actors playing B in various combinations, until the role of A is taken up by Lizzy Watts, both more businesslike and emotionally mature, showing how people change under pressure. In the case of A, this is not just the strain of a longterm relationship, but also the severe illness of a parent.

With Bianca Stephens and Tilda Wickham adding new character traits, in one case feistiness and in the other fragility, to B, and to the other characters, and with Akuwudike returning to the stage as a wry therapist, the sense of gender fluidity and personal growth comes across very strongly. Bethany Wells’s set of white panels is simple, but versatile, and allows the actors easy entrances and exits. A handful of props are all that is needed because our main concentration is on the acting, which effectively tells the story, such as it is. Jones directs with intelligent sympathy, occasionally adding emotional shading: at various moments, actors linger to watch their other-selves coping with the rush of their feelings.

The whole experiment has a lovely lightness of touch, with each performance being convincing in itself and intriguing in that it allows the audience to speculate on how different, or the same, a relationship can be depending not only on the gender of the protagonists but also on their individuality. After a while, whenever a character speaks, you are encouraged to imagine that someone who looks very different could say the same lines. So the action of the play is constantly shadowed by other selves, other people, other possibilities. Like life itself.

In Either, Thomas not only has a playful attitude to a character but also a profound interest in how, under present social conditions, the state of being in love offers one of the only possibilities for feeling intense emotions and escaping the daily grind of quotidian worry. In the past, these feelings could be experienced through political activism or generational revolt, but now for many millennials, they are confined to the personal sphere. With or without the use of drugs. If you can’t change the world, then never mind, you can always use passion to open the doors of perception.

But while it is refreshing to see both the intensity of feelings in this story and the way it shows how gender is flexible and fluid, I do wonder if the text has not been deliberately drained of any contentious issues. Although the characters argue about fidelity and open relationships, about loving your parents as well as complete strangers, none of them make powerful gendered statements that could be really provocative in the mouth of a different person. There is no sexism, no racism, no deep antagonism in this story. Perhaps the playwright’s and director’s worst enemy here is politeness.

On the other hand, it is really good to witness the acute questioning of monogamy in a studio production whose various elements gel so neatly and pleasurably. As a picture of contemporary life—with its dating apps and coffee shops, rave parties and suffocating offices, freelance creativity and global travel—the piece effectively suggests that each decision that we make—whether to have sex with someone or change our jobs—excludes another possibility, and therefore implies a sense of loss. As the title warns, each of us is caught in an either/or that is able to imprison as well as liberate.

Either is at the Hampstead Theatre until October 26. 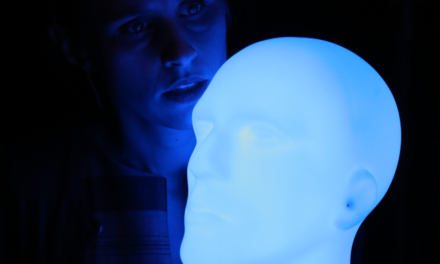 What Theatre and Science Can Learn From One Another 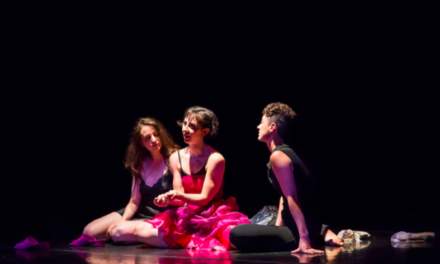 Review: A Peek Inside Wig in a Box’s New Work-in-Progress