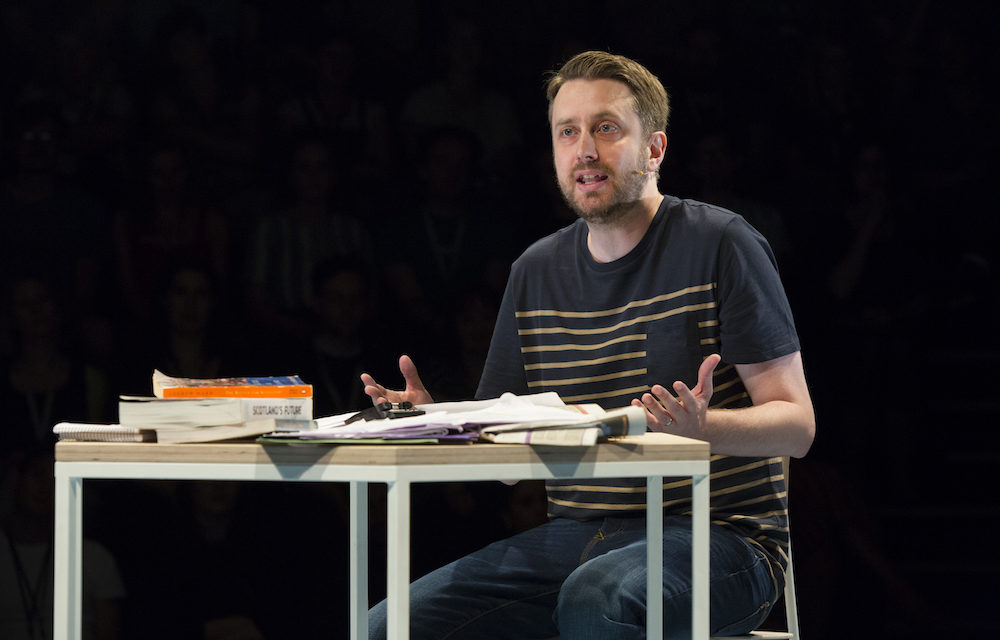 Another plague is sweeping British theatre: audience participation. Instead of just sitting back and enjoying the show, your visit to a venue is now likely to involve voting on the guilt or innocence of terror suspects (as in Terror or Blurred Justice) or, in Rob Drummond’s new solo show, The Majority, for the National Theatre, voting on a whole range of issues as this Scottish playwright and performer teases out a handful of ideas about participation in democracy. The first step is technological: as we take our seats, we are issued with a small voting machine (you press one for yes and two for no) and given our instructions.

At the beginning, what Drummond, our host for this short 90-minute evening, wants to know is the profile of the audience. So he asks us to vote on some simple propositions, such as whether we should ban latecomers to the theatre (the answer is no). And whether we should carry on with the show (the answer is inevitably yes). It turns out that the audience is 90 per cent liberal, 91 per cent white, 47 per cent male, and 67 per cent users of social media. Of the people present, 46 per cent believe that voting should be mandatory (not so liberal), and 48 per cent that “violence is sometimes the answer” (but what is the question?). While 38 per cent believes in absolute freedom of speech, 79 per cent think that they can make a difference. So far, so-what-ish?

Drummond, who is a likeable and chatty compere, then moves on to the first of a series of classic thought experiments: they follow the formula of “a runaway train is heading towards five workmen on the track” — and we must decide on whether to divert it to kill just one person (there are several variants on this). While not as “ethically fraught” as Drummond seems to think, these little puzzles have an appealing neatness, although repetition does tend to blunt their edge. And then Drummond, or “Rob” as he has now become, tells us the story of Eric.

Kicking his heels in Glasgow’s George Square on the day after the Scottish Referendum vote, Rob meets Eric, an old “nutbag, a paranoid”, who lives on the coast somewhere past Aberdeen and who believes that neo-Nazis have taken over his local council. He is also a beekeeper, and the incessant sound of busy bees is one that welcomed us into the auditorium and that acts as a metaphor for social interaction. Rob might not be in sympathy with all of Eric’s ideas, but he is attracted to the fact that this old-style socialist participates in the democratic process — and is passionate about politics. After all, Rob tells us, he himself didn’t vote in the referendum and that fact is gnawing away at him. Eric’s response, characteristically, is: “Why didn’t you vote, you fuckin’ moron?”

As the tale becomes more and more of a shaggy dog story, with some amusing conspiracy theories, Rob plays with audience expectations. How much of the story is true? How many of the votes are real? Surely, this can’t all be an elaborate fiction, and, if so, to what purpose? As we watch Rob become first a keyboard warrior and then a violent demonstrator, our own ideas about what should constitute political activity in a democratic state are placed under scrutiny. If most of the conclusions are a bit weak — yes, we should communicate better, and argue more fruitfully, and participate more fully — Drummond retains a kind of earnest charm that makes him a thoroughly watchable performer. I particularly like the episodes which feature his mum, who is introduced as empty-headed, but then grows into a figure of wisdom. Neat.

While the point that, in any Western democracy, a narrow majority can lead to unsavory outcomes hardly needs laboring, much of this show is more of a brain teaser than an ethical debate. Many of the questions are formulated in a Yes/No way that doesn’t really stimulate discussion, and certainly, doesn’t help to open up the ideas. Rob’s experience of violence in one of the offshoot episodes of his relationship with Eric leads to the conclusion that maybe radical activism is not for him. You can’t really quarrel with that, but it does mean that he can’t dispel the impression that we are watching an extended example of Snowflakism, or soft socialism. You ache to tell him to get a grip.

Directed by David Overend, on a stage dominated by designer Jemima Robinson’s beehive sculpture, and often lit up with videos by Mogzi Bromley-Morgans, this is a show that reaches for profundity, but never quite grasps it. While it is true that being wrong feels pretty much the same as being right, and total agreement is the death of thought, I’m really not sure how that helps us deal with the results of the Scottish Referendum, the Brexit vote or the election of Donald Trump. Light and entertaining as it is, The Majority is a bit too tricksy for my taste, and it is likely to remain a minority interest.

Reposted with permission from Sierz.co.uk