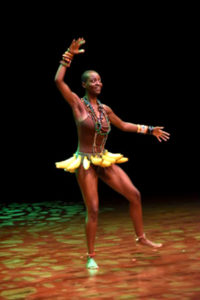 Before Ella Fitzgerald, Louis Armstrong, Jesse Owens, Dorothy Dandridge, Billie Holiday, Diana Ross or even Muhammad Ali, there was another Black superstar entertainer – a woman unlike any other of her time -and her name was Josephine Baker. Her story has been told in film and documentaries and it has now landed in the live theatre world with a bang: in the form of two highly-acclaimed one-woman shows titled, La Négrophilie and Josephine: A Burlesque Cabaret Dream Play respectively.

In a description posted on her official website, the playwright describes the work thus:

“In a very racialized 1910s America, Josephine Baker is both lauded and taunted for the brown hues of her skin. Despite being incredibly talented and beautiful, internalized racism displayed by people of her own race held young Josephine in a compromising predicament concerning success in the African American theater scene. Never light enough to pass the quintessential “paperbag” test (used by blacks at this time to test the lightness of one’s skin/how much white or mixed-blood one had), she left the United States and found stardom in the “land-of-the free” Paris, France, where racism was…well, different than in the States. She became an instant success; a sex icon catapulting into the first major movie star of color, an aid to French Resistance during WW2, an activist for the Civil Rights Movement, and so much more.

But what happens to the soul when fetishization, and eroticization of the body is the price you pay for fame…for freedom? Shuttling 40+ years in time, La Négrophilie takes you on the twisty ride of young Josephine’s rise to international stardom, all the while leaving behind a trail of questions about the good, bad, and ugly of oppressive love.”

Born and raised in a racially segregated America, the real Josephine Baker started dancing professionally as a teenager. Her entry into the showbiz world coincided with the ‘Harlem Renaissance’ and at eighteen she got the opportunity to tour to Europe with her troupe of African-American performers. In Paris, France, where she gained instant recognition, a new show was devised for her: the ‘Dancer in a Banana Skirt’(and little else). She became an overnight celebrity, instantly recognizable and highly paid. According to Time, a Hungarian cavalry officer and an Italian count fought a duel in her name in Budapest, in 1928. The sword-fight took place in a cemetery, in her presence.

Unlike the US, France had no Jim Crow laws and ‘madam la Baker’ did not face overt racism (she could live anywhere and patronize posh eateries, for example). She made Paris her home and would later lose her American citizenship (although she visited America severally and participated in the Civil Rights marches of the 1960s). In France – where she branched out into singing and acting as well – she became a fashionista and socialite. Several French magazines offered her fashion columns to write. Her super-shiny hair, that stuck to her head like a coat of jet-black paint, was a major point of interest. With regard to her better treatment in France than America (then in the throes of often-violent Civil rights demonstrations) Josephine said:

“How can I forget it (receiving a hero’s welcome in France)? They made me forget the colour of my skin. All of my good friends. They were White!”

In Germany, the now-famous Black female dancer created a sensation – and stirred controversy – after a series of performances in post-World War 1 Berlin. She reportedly received 40,000 love letters and 2,000 marriage proposals! She was eventually ejected from the Berlin nightclub circuit by socialist moralists who were offended by her highly sexualized stage act. During World War II, she zealously aided France’s war effort and was decorated for it after the hostilities. She proudly wore her French military uniform in peacetime, even while visiting America in the latter half of the 20th century. She also, finally, managed to get moderate success and acclaim in the US, in her old age, performing in extravagant costumes at the hallowed Carnegie Hall. US author, Darryl Pinckney (quoted in the documentary Josephine Baker: The First Black Superstar):

“You have to think of Josephine Baker as a symbol that the Jazz Age and the Harlem Renaissance could share. That in some way the White and the Black wings of this artistic movement that we could call “Modernism” could sort of meet in her, as a symbol.”

“She (Josephine Baker) exported the Harlem Renaissance to Europe. And for her to do that at that time, and do it so quickly! She moved to Paris and two years later, she was the highest paid (female entertainer) and most photographed woman in the world. That’s amazing.”

A staunch believer in universal brotherhood, Ms Baker spent her 40s and 50s adopting and taking care of 12 children from all corners of the world, whom she christened ‘The Rainbow Tribe’. After enduring soul-crushing racism in the USA and finding success and acceptance in France, she wanted to prove that all the races of the world could, in fact, co-exist harmoniously. Despite being wracked by ill health and with her fortunes declining, she was determined to make nonsense of racial segregation. Her words:

“My little village, this little village of the world, is badly in need of financial support so I came back on the stage to make it possible for it to live on and on and on. Because it is very important, that little village. I have a lot of children from the four corners of the world who live there (in her French château). They are a symbol of true brotherhood. I must have the money for these children. The (château, which also doubled up as a tourist attraction) must live, it must not die. This village is too important. It represents a beautiful, beautiful, beautiful ideal. An ideal (that) must not die. It mustn’t.”

Sustaining ‘The Rainbow Tribe’ well beyond her ‘productive’ years put an enormous financial strain on the former entertainer, and she spent the last days of her life on the breadline. Her impact on arts and culture, however, continued to be felt across the world, like seismic shock waves. According to the documentary film Josephine Baker: The First Black Superstar:

“Josephine’s impact stretched way beyond the theatre. She entranced and inspired a generation of writers and artists in Paris, including Picasso, Hemingway, Collette and Seminole. Alexander Colder sculpted wire models of her, and Gertrude Stein imposed an affectionate tribute.”