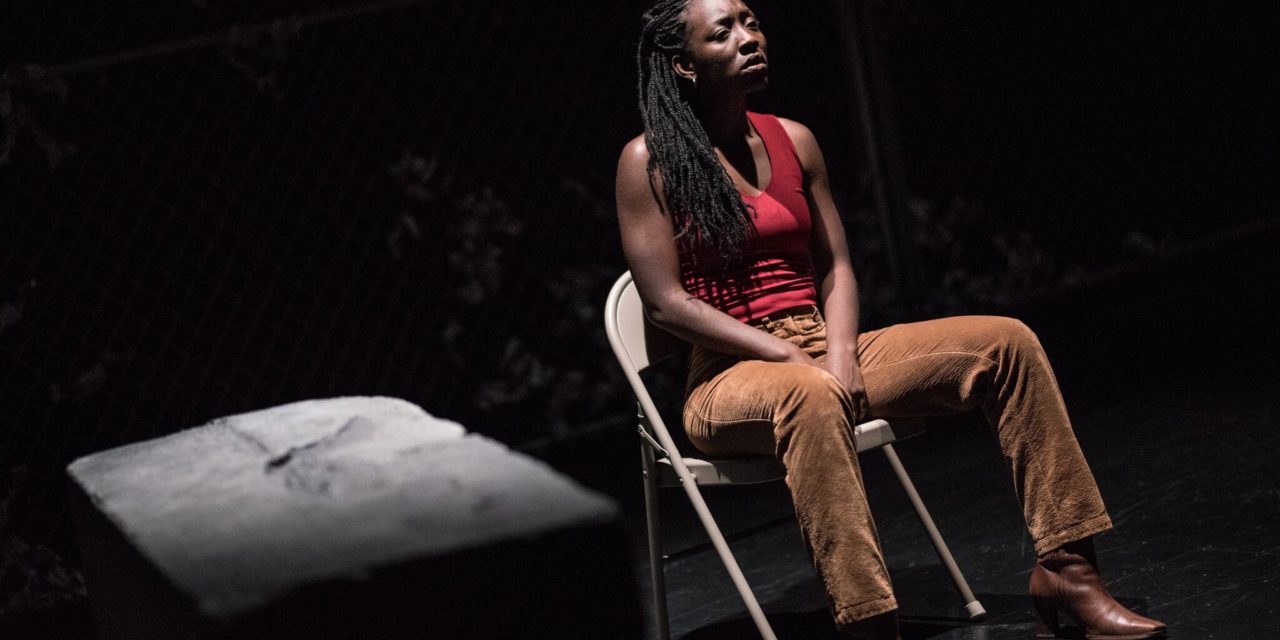 Shelley Liebembuk reviews Cahoots Theatre and Obsidian Theatre’s world premiere of The Other Side of the Game, written by Amanda Parris and directed by Nigel Shawn Williams:

Five actors enter the stage, each carrying a folding chair. In unison, they slam the chairs down and sit staring into the audience for one…two…three minutes. The silence is broken by a sharp collective scream, as the actors expand their voices and bodies out for a brief moment, only to then contain themselves again in the impasse of continued waiting. The silence resumes. One actor breaks the stasis with a quick scratch. Shortly thereafter, another screams again, a third yawns, a fourth picks a wedgie. Each carefully choreographed moment crisply breaks the waiting, only to then reinscribe the weight of its inescapable duration. 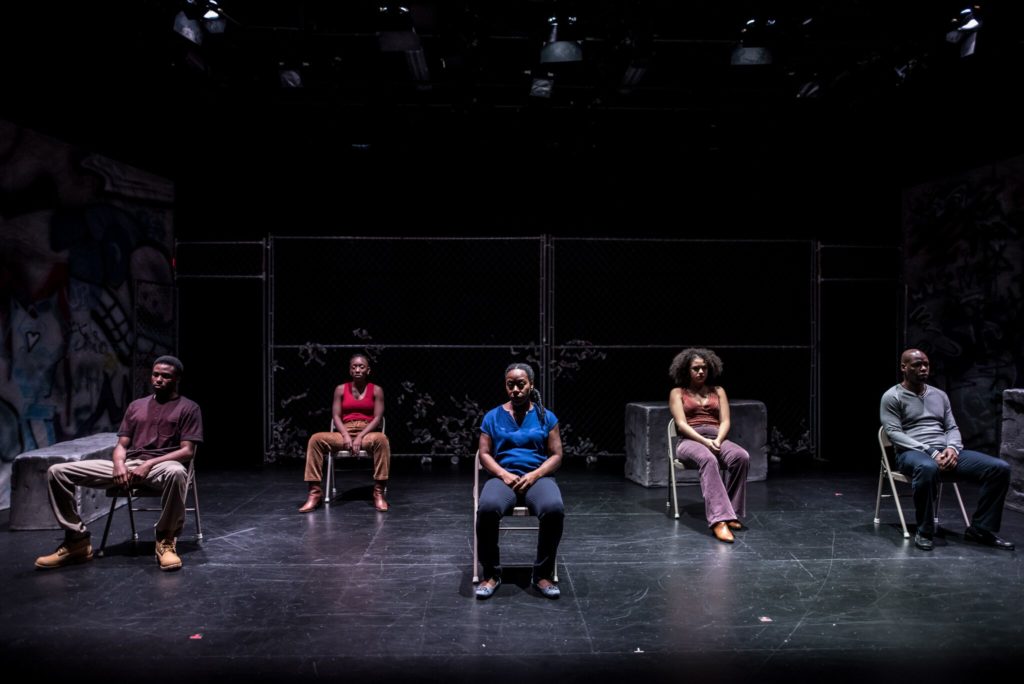 Choreographed by Jasmyn Fyffe, and especially captivating in actor Ordena Stephens-Thompson’s embodiment of these movements, this strong opening scene refreshingly throws its audience into the core themes of the play without having uttered a word. As Amanda Parris writes in her Playwright’s Note, it is this “abstract tension-riddled space of the waiting room that anchors this story,” a story inspired by Parris’ experience of visiting a friend at the Don Jail, and one that grew following conversations with other women who had visited someone they loved who was incarcerated. This site at once captures the institutional marginalization and violence that affects the Black population, and the individual and communal resistance to it. Most saliently, it highlights the ongoing resistance of Black women.

Parris centers the play on the experience of Black women, often otherwise forgotten or invisible in mainstream Canadian representation because of their Blackness, or marginalized to secondary roles in male-dominant Black representation. Her protagonists are Black women seeking to define the terms of their own resistance, revealing a fierce, self-sacrificing loyalty. As Parris elaborates in her Cahoots’s Youtube interview, they are “ride-or-die” women: “a hip-hop term, used to describe an individual, often a woman, who has an undying loyalty to someone outside of herself […] often personified as a woman because quite frequently women are the ones putting themselves second, third or fourth in the list of priorities and putting somebody else or something else in front of that.” The play’s protagonists exist in two settings: a contemporary Toronto just before the rise of the Black Lives Matter movement, and Toronto during the 1970s Civil Rights movement. As the scenes weave across these temporalities, we see our heroines struggle to take care of their children, to better their own circumstances, and to support their partners and friends, in the face of intersectional poverty, racism, and sexism. Virgilia Griffith (in the roles of contemporary Nicole and 1970s Akilah) commits to performing the complexity of this struggle: the fierce resilience and the overwhelming exhaustion. In a moving passage, Griffith as Akilah lists the names of those who have fled, of those who have been jailed, of those who have been killed, concluding through gritted teeth “and I’m still here.” 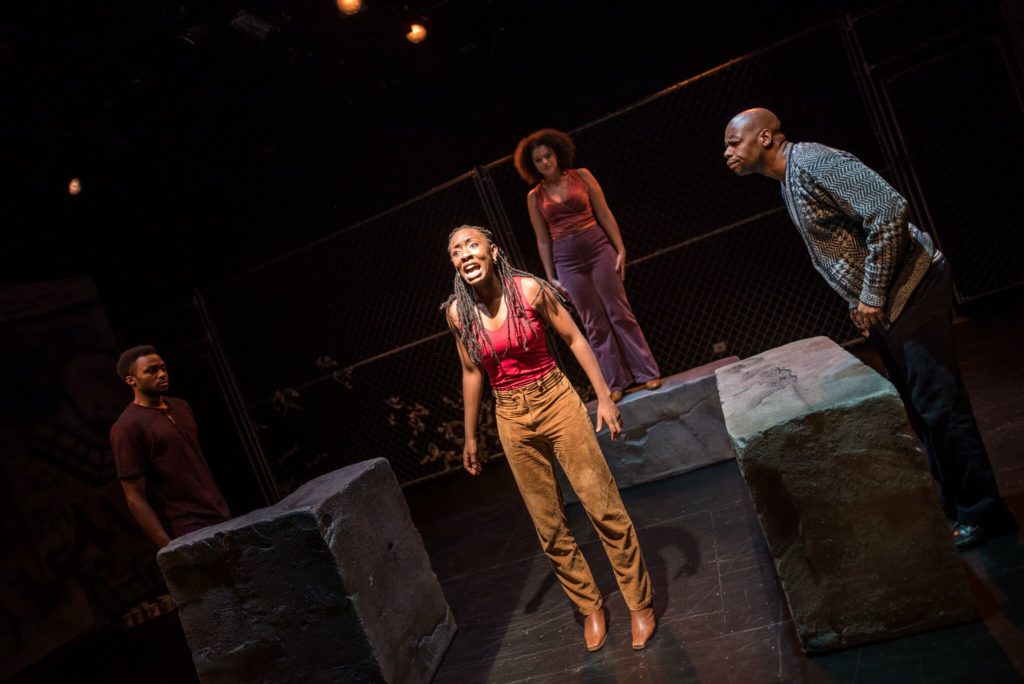 While this production is still steeped in the prescribed Naturalism that permeates much of mainstream Canadian theatre and results in overly earnest, eye-locked acting, I found the performance was at its strongest in the few scenes that, like the waiting room vignettes, went beyond this convention. One such scene has Griffith run in place while being fantastically surrounded by her fellow actors, who tower over her from their position on the set pieces, so capturing Akilah’s negotiation of the superhuman expectations placed on and internalized by Black women.

The Other Side Of The Game is significant in that it centers on the intersectional body of Toronto’s Black women. It remembers the long-standing presence of Black experience and activism in Toronto and highlights that forty years later, the struggle continues. Moreover, as Parris points out in her Intermission Magazine article, the play has become an “archive of Toronto’s soundscape,” giving voice in script and on stage to the language of Toronto’s west-end, a voice that remains underrepresented on Toronto’s stages.

Other Side Of The Game plays until Nov. 5, 2017. www.cahoots.ca/otherside

Running concurrently with Other Side Of The Game, in the lobby of the Aki Studio: an exhibition of visual artworks that echo themes of the play.

This post originally appeared in Alt.theatre on October 27, 2017, and has been reposted with permission.