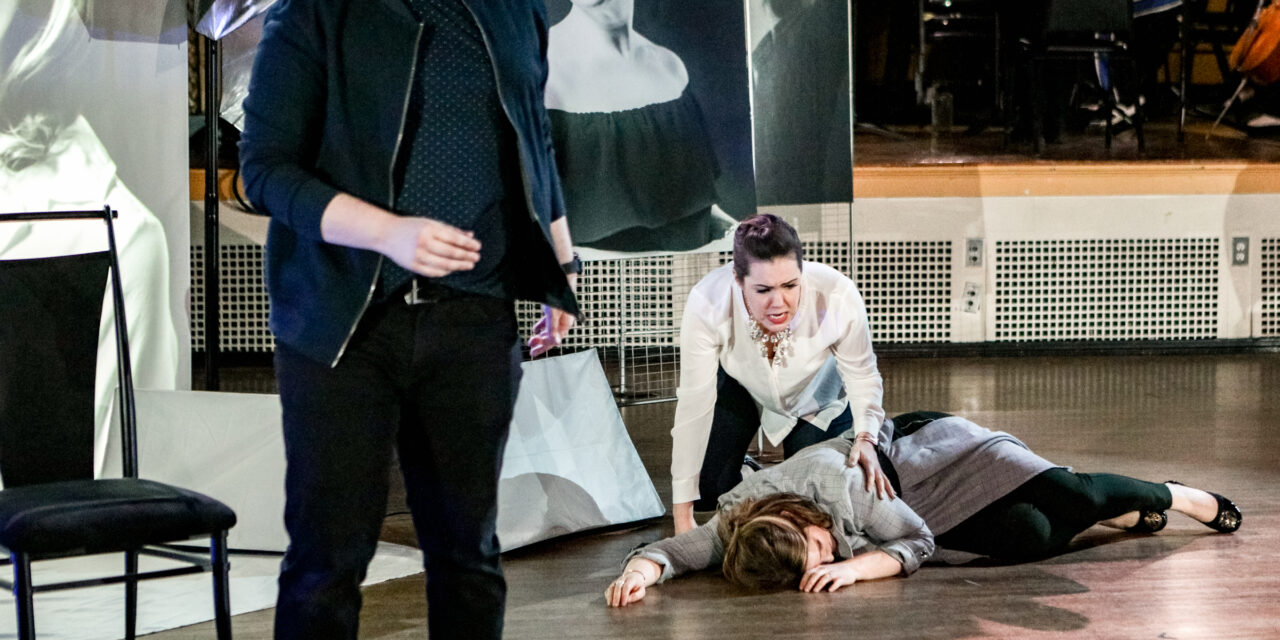 Classical opera is a wonderful art form because, in so many ways, it is timeless. The music may be centuries old but as relevant as ever – stories of love, passion, and scandal get at the core of humanity today. There are some operas, however, such as Don Giovanni, in which the feeling of timelessness is present yet unfortunate, which I believe actually makes Don Giovanni the perfect opera to stage at this moment in time.

The Boston Opera Collective’s production of Mozart’s Don Giovanni, directed by Patricia-Maria Weinmann and Greg Smucker, begins with a picture of Harvey Weinstein projected onto two screens. As the overture plays, images and articles showing famous men who have sexually assaulted people over the last fifty years or so flash before the audience’s eyes. And thus, opens the modern Don Giovanni, the story of an artist known for sexually assaulting women–a story that is horribly as relevant as ever.

Mozart’s opera Don Giovanni tells of a serial rapist/womanizer Don Giovanni (Junhan Choi) and his varying encounters with three women: Donna Anna (Jessica Jacobs), whose mother was murdered when she came to Donna Anna’s aid as Don Giovanni attempted to sexually assault her, Donna Elvira (Isabelle Zeledon), who slept with Don Giovanni, thinking that he loved her, and spends the opera trying to warn other women of his ways while trying to resist her strange attraction to him, and Zerlina, an adorable young bride who Don Giovanni attempts to assault on her wedding day. Ultimately, Don Giovanni gets the punishment he deserves for his horrible treatment of women as he is dragged down to Hell in retribution for his crimes.

Every performer in the production had an incredible voice that filled the hall with glorious sound. Particularly impressive was Jessica Jacobs (Donna Anna) whose soprano runs had the audience stunned and whose sorrow and poise inspired sympathy and awe for her tragic character. Isabelle Zeledon (Donna Elvira) commanded the stage with her powerful presence and equal voice. Jonhan Choi (Don Giovanni) greatly impressed me with his ability to faithfully portray this infamous character while exuding charisma and confidence fitting for the complex role. 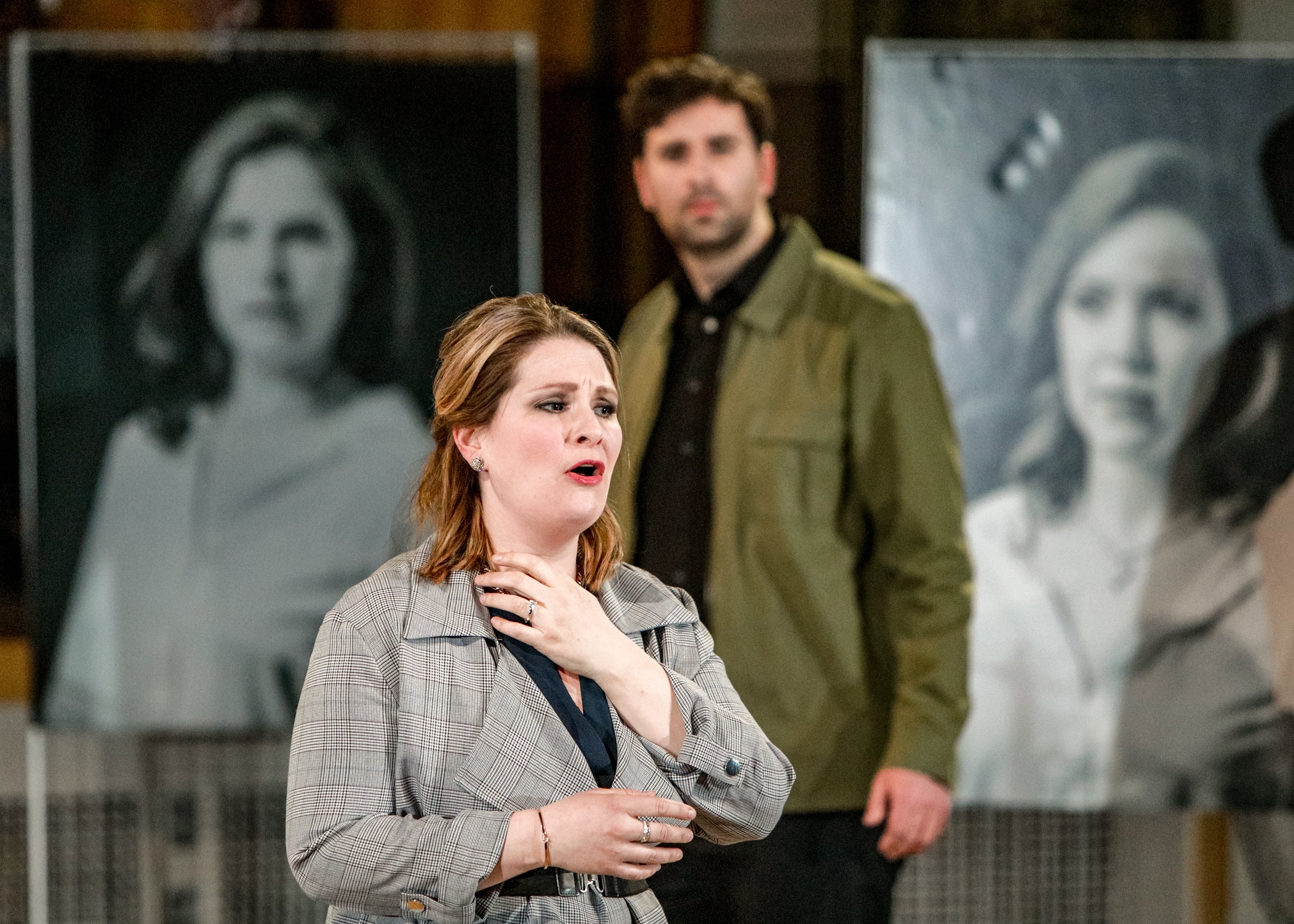 The set, projections, and costuming work perfectly to set the production in the present day. The opera takes place mostly at Don Giovanni’s photography studio in upscale SOHO New York City. Two projector screens on either side of the stage, surrounded by translucent photography umbrellas, set the scene with pictures of the setting – from the warehouse windows of the studio to the dimly lit alleys of the city. The use of projections within the scene to be a very effective part of the storytelling. One moment that was particularly striking was when Leporello, Don Giovanni’s right-hand man played by Andrew Miller, sings about all of the women that Don Giovanni has slept with all over Europe. The number is in the thousands, and as he describes this to the horrified Donna Elvira (Isabelle Zeledon), the images of all of the women flash across the screen, giving the audience a more concrete sense of the scope of Don Giovanni’s sexual conquests.

The costumes are chic and tell an interesting story of their own. The color pallet was di-chromatic – characters in white seemed to be those who were pure sexually and in intention, while characters in black were not. This was particularly striking in the cases of Donna Anna – dressed in a flowing, light gray and white ensemble, – Assistant (Felisha Trundle) – who wordlessly moved throughout the production in a white sweater, – and Zerlina. For all of the First Act, Zerlina is a clear example of this: a young bride dressed in white – the symbol of purity, easily manipulated by a man with dark intentions. However, after Don Giovanni’s attempted assault at the end of the act (at a house party attended by many sexualized women dressed all in black), Zerlina returns in the Second Act seeking revenge and her all-white dress is replaced with a gray gown dotted with large black flowers, seeming to symbolize her fall from innocence.

Dark colors to symbolize maliciousness in nature and light colors to symbolize purity and innocence is common enough and worked well when it came to the male characters. However, the fact that female characters such as Elvira and Act Two Zerlina were coded in black garb after their sexual encounters with Don Giovanni confused the intention behind the coloring in the costuming. Do dark colors mark those who have had sexual encounters and, if so, what is the intended message if both abusive men and victimized women wear the same shade of black? Or perhaps dark colors symbolize a loss of innocence but a gain of influence and persuasive power?

This brings up a larger question in terms of how Directors Weinmann and Smucker coded power in their production. I find it to be problematic when female empowerment is shown as a woman assuming the role of the abuser – a role typically held by men (both in society and in the opera). One example of this that stood out in the production was in the Second Act when Zerlina and Masetto find Don Giovanni in an alley, throw him to the ground and beat him. Zerlina, in her newly dawned dark dress, stands over Don Giovanni holding a hand gun as a means of asserting her dominance over him. This portrayal of Zerlina’s revenge suggests that in order to gain power in society, one must be violent, abusive, and domineering – the same traits for which Don Giovanni is so severely punished. Showing Zerlina’s reclamation of power as a violent act, reinforces this patriarchal view of power. 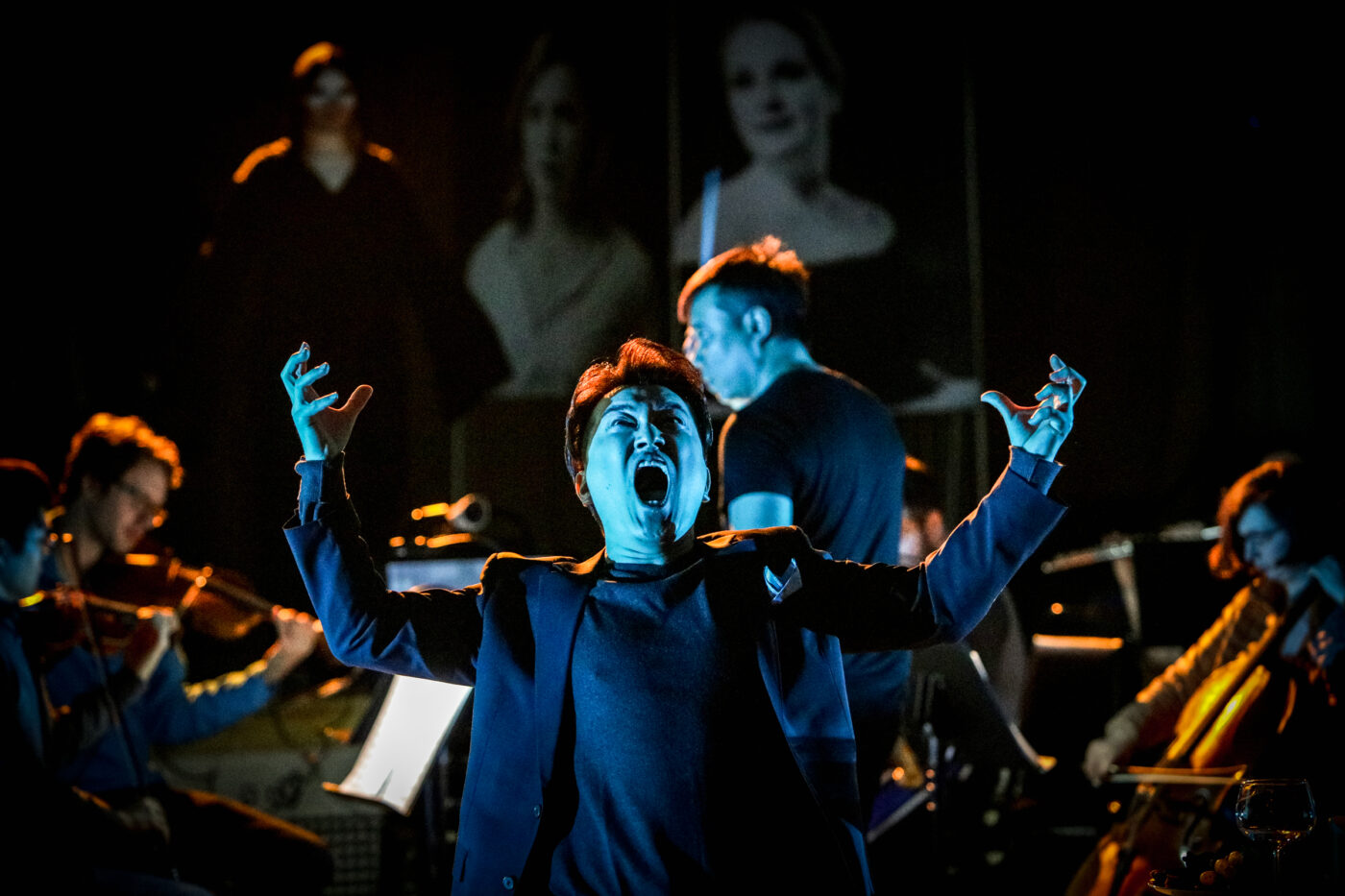 Another staging moment that was distractingly questionable was Zerlina’s aria in Act One, Batti, Batti O Bel Masetto (Beat Me, Beat Me, Handsome Masetto). Sarah Cooper’s (Zerlina) voice is beautiful and her countenance is sweet as she defends her innocence, asking her fiancé (John Bitsas) to beat her as a means of assuring him that she did not sleep with Don Giovanni. At one moment, she removes Bitsas’ belt and wraps it around her neck coyly as he apprehensively resists her attempts to get him to attack her. While Cooper sang the aria well, the flirty manner in which she delivered the request to be beat difficult to watch. Wrapping his belt enticingly around her neck evoked BDSM imagery for me, which was inappropriate in a moment following Masetto almost actually attacking Zerlina. This aria is difficult to wrestle with as the text is inherently disturbing. The flirtatious staging of the aria seemed to be an attempt to mask that horror in the text, which was a missed opportunity. Though Zerlina ultimately gets what she wants following the aria (Masetto’s tentative forgiveness), the flirtatious intention of the staging placed the power to resist abuse in the hands of Masetto rather than in the force behind Zerlina’s use of reverse psychology.

Clearly, sexual abusers in real life are not being dragged down to Hell for their crimes and nor are they being dragged to prison for the most part. Something needs to be done in society to curb the influence and power of these men and art holds power in showing the world what a better society can look like. Choosing a culturally relevant opera like Don Giovanni is a way to explore what could be done when dealing with a perpetrator of assault today and to try to redefine what power can look like. While Don Giovanni deals with societal themes and situations that remain problematic today, the intention behind the writing actually sends a pro-social message: sexually assaulting women is evil and men who engage in that kind of behavior deserve to be punished.