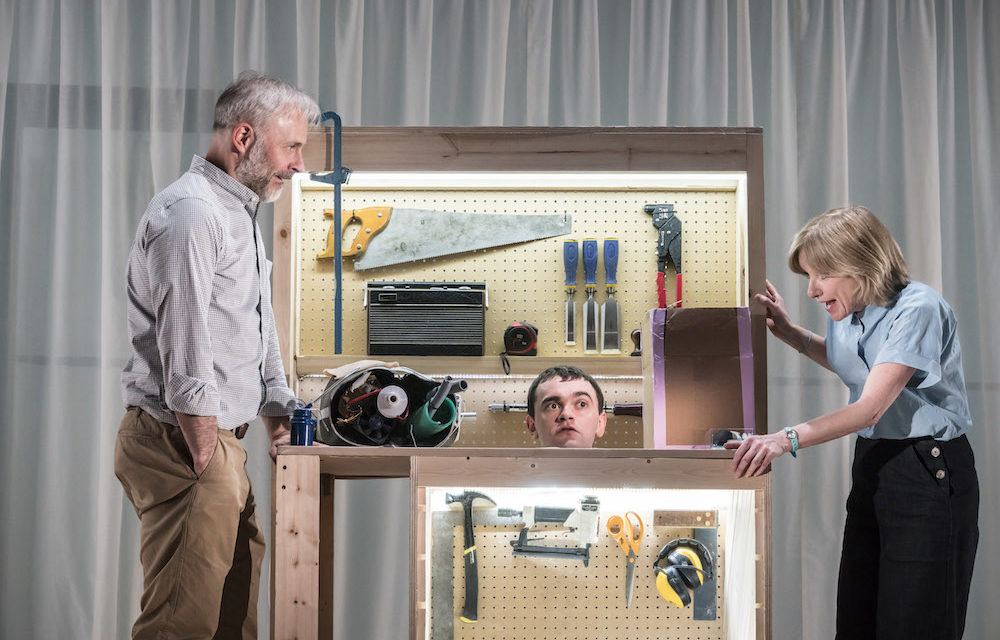 There’s a whole universe which British theatre has yet to explore properly—it’s called the sci-fi imagination. Although this place is familiar from countless films and television series, it is more or less a stranger to our stages. With notable exceptions such as Alistair McDowall’s X and Philip Ridley’s Karagula, the imaginary worlds of humanoid robots and space travel and parallel universes are rare delights so it’s great to welcome Thomas Eccleshare’s new Royal Court play, Instructions For Correct Assembly, which in its satire at first offers an intriguing mix of Westworld and Stepford Wives. And stars Jane Horrocks.

But Harry and Max aren’t ready to give up on parenthood. When Nick goes missing, on some extended bender involving drink and drugs and god knows what else, they decide to buy a replacement. So Jån is delivered, a teenager in a flatpack ready to be assembled from an instruction manual. Made up of complicated metal and plastic parts, Jån looks identical to Nick and is gradually built on stage by Harry and Max as if he was a piece of super-elaborate shelving from IKEA or electronic white goods from Curry’s. He needs programming, and in some amusing passages, his emotional levels have to be adjusted to fit in with suburban family life. And he is managed by remote control.

At first, things go well. Harry and Max talk about Jån, their perfectly nice new son, to their friends Paul and Laurie, whose 18-year-old daughter Amy is on her way to becoming a perfectly nice young woman. She studies hard, behaves well, and doesn’t go on massive drug binges. She has grown up with Nick, knows him well and shares the sadness of the adults when they find out what eventually happens to him. But is Jån really such a good substitute, and what happens when this humanoid machine starts to go wrong? Haywire.

Eccleshare’s writing combines a contemporary take on the Frankenstein myth with a satirical attitude to Middle England and its suburban conformity. Taking as his starting point the IKEA catalog—with its images of perfectly nice couples and perfectly nice furnishings—he attacks the equation of conformism with happiness and makes some neat, sometimes genuinely funny, points about our current desire to have perfect bodies and perfect houses and perfectly PC speech. At the climax of this 100-minute piece is a fraught dinner party where Jån is introduced to Paul, Laurie, and Amy. And it’s fair to say that it’s a far from the perfect occasion.

Some of the issues raised by the playwright tap into our collective fears about how Artificial Intelligence, robotics, and the digital world might affect our identity as humans. We have already spent decades wondering if androids dream of electric sheep: this play asks us to imagine robots repairing themselves. As the distinction between the natural and the industrial becomes hazy, we might also wonder whether machines could end up having similar mental problems to us. How would depression manifest itself in a robot? Can an android be bi-polar? Is addiction a rewiring problem? Yet despite a couple of resonant speeches, and some strong stage images (working out on a treadmill as a metaphor for the perfect life), the play is disappointingly thin. The suspicion arises that Horrocks has been drafted in to sell an underpowered event.

The trouble with Instructions For Correct Assembly is that for a drama which depends on the contrast between humanoid robots and real flesh and blood, there are no sympathetic human beings. As usual with these kinds of stories, very soon you begin to suspect that all of the characters on stage are androids. And this is certainly the impression emphasized by Hamish Pirie’s slightly mechanical production, with its assembly line pace and artificial lighting. Despite a suitably perfect if chilly design by Cal Dyfan, which has deliberately placed plastic flowers in the foreground and created an encroaching jungle wilderness as a background, the artificiality of the acting style—robotic dancing and jigging about during the scene changes—means it’s hard to feel anything for anybody.

Unlike Westworld, this robot society is more of a political statement than an engaging story, and the lack of a compelling plot doesn’t help (take a look at the playtext for evidence of several significant last-minute changes). Although Horrocks does have one moment of intensely expressed emotion it is like a single blossom in a bed of hard soil. And the rest of the cast is likewise emotionally undernourishing. Mark Bonnar’s Harry is often a figure of fun, struggling in a manly way with DIY, but elicits little sympathy. Even Brian Vernel, who plays both Jån and Nick, finds distinguishing the affectless android from the human difficult, while Jason Barnett (Paul), Michele Austin (Laurie), and newcomer Shaniqua Okwok (Amy) can only offer capable support. This is an enjoyable cartoon critique of everyday conformity, but don’t expect anything else.

Instructions For Correct Assembly is at the Royal Court until May 19.

This article originally appeared in Aleks Sierz on April 13, 2018, and has been reposted with permission.