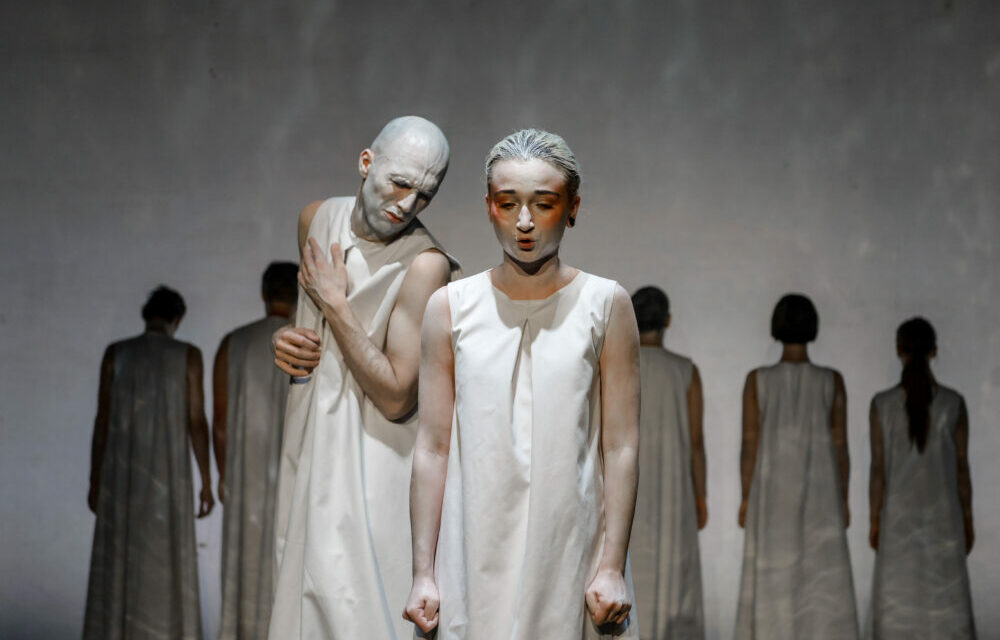 The talented Romanian director Mihaela Panainte adapts Nobel laureate Herta Müller’s visceral first book for an intimate studio performance that capitalizes on the dynamic energy of a young and well-oiled ensemble, and explores corporality in a mesmerising installation that tests the boundaries of autobiographical writing in and for performance. By turning to an initially censored piece of literary fiction that is also rather economical with words, Panainte’s production celebrates the precision of carefully chosen words and theatrical images, and highlights the universality inherent in the source material, dismantling the illusion of innocence often associated with village life and defying nostalgic reminiscences of times and events past. Produced at the studio of the National Theatre in Iaşi, operating as a creative hub mainly for younger artists, this sell-out production has proven appeal to a remarkable cross-section of the local population, and is successfully enticing new audiences to contemporary experimental theatre-making that intersects the tradition of text-based drama with visual arts and forms of movement-based performance. 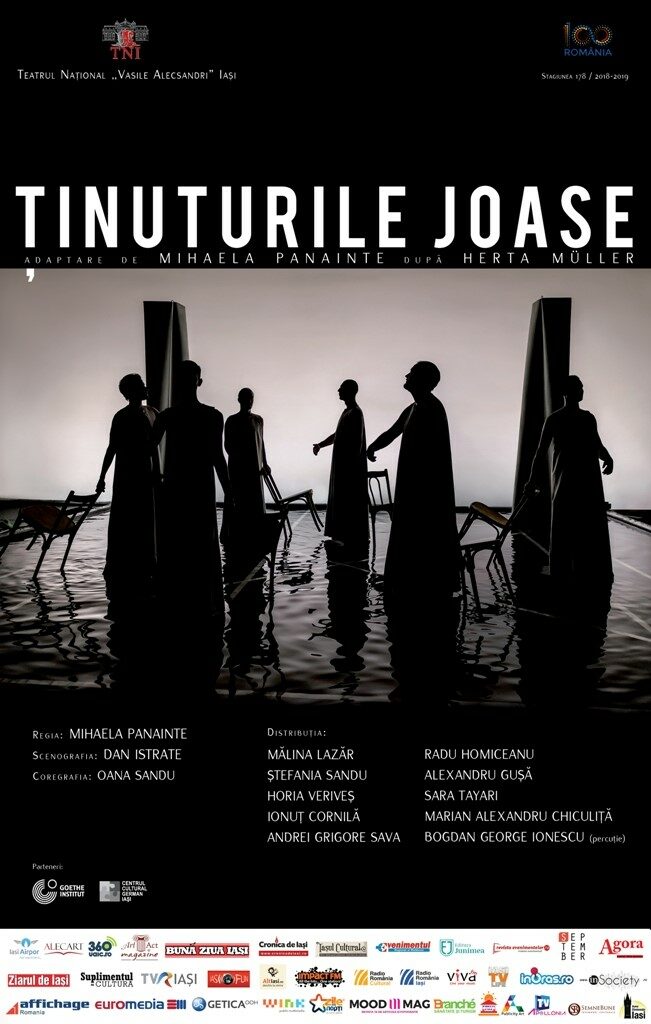 Ţinuturile joase [Lowlands] premiered on 13 October 2018 at the Vasile Alecsandri National Theatre in Iaşi, Romania. It was adapted for the stage and directed by Mihaela Panainte, based on a volume of short stories by Herta Müller, originally entitled Niederungen and translated into English as Nadirs. This collection was the Nobel Prize–winning author’s first book, written in German in 1982 and published in Romania in censored form, the full text appearing in Germany in 1984 (as published by Rotbuch), and in Romania only after 1989 – in Alexandru Al. Şahighian’s excellent translation that formed the basis of the current adaptation. The book focuses on the perspective of a child narrator, by way of a series of stories that centre on life in a remote village against the backdrop of the oppressive atmosphere of mid-twentieth-century Romania. It is important to stress that, in a further layer of intertextuality, Müller’s work was in turn inspired by East German poet Johannes Bobrowski, whose focus on ‘shadow lands’ is in direct association with death and decay, the title thus referencing both low-lying lands and the lowliness and misery of life.

As a German-speaking author writing in eighties Romania, Herta Müller conjures up the world of her childhood in the Swabian community of the Banat region, situated in the western part of the country, along the border with Serbia and Hungary. This is a frank and penetrating view of an isolated population, on the verge of dissolution due to ethnic cleansing achieved by accelerated immigration to Germany, perceived with reticence by some Banat-Swabians who found Müller’s portrayal of village life unsympathetic. Indeed, Müller makes no attempt at idealising this childhood or the climate in which it takes place; her aim is a declared exercise of free speech, which she also practised on a directly political level as a member of Aktionsgruppe Banat, a group of German-speaking writers in Romania who spoke up against censorship under Nicolae Ceaușescu’s dictatorial regime. Müller will return time and time again to this subject matter, most famously in the novel The Land of Green Plums, and will receive the 2009 Nobel Prize for depicting the ‘landscape of the dispossessed’ with ‘the concentration of poetry and the frankness of prose’.

It is this frankness and concentration of lyricism that Mihaela Panainte’s production succeeds in capturing most eloquently. Rather than privileging historical accuracy or the local flavour of a particular place, the director explores the philosophical notion of one’s relationship with childhood, childhood being seen here as a universally valid inner personal space that is at the root of our becoming as human beings. The variety of stories covering multiple aspects of daily life in the book are pulled together as a multiplicity of interconnected and overlaid theatrical images, that invite spectators into parallel worlds in a dream-like space where reality and illusion are situated side by side. The child protagonist at the centre of this universe is the ultimate observer of this world, and this observation is carried out in minute detail and signposted for the audience by way of a tight choreography that interweaves sight, sound, gesture, and movement. Taking into account ritualistic aspects of village life, such as the mother’s obsession with sweeping, the weekly family bath or the funeral sermon, the production confronts adult behaviour with the candid fear and curious imagination of a child observer, and as Panainte declares, this rural universe stands in for a cosmic universe, and her concern is with the transformative potential of the child protagonist. In this sense we are dealing with a process of initiation, given that the child is the only figure that shows indignation at troubling events and the only one who has the potential to engineer change by making use of creative imagination. 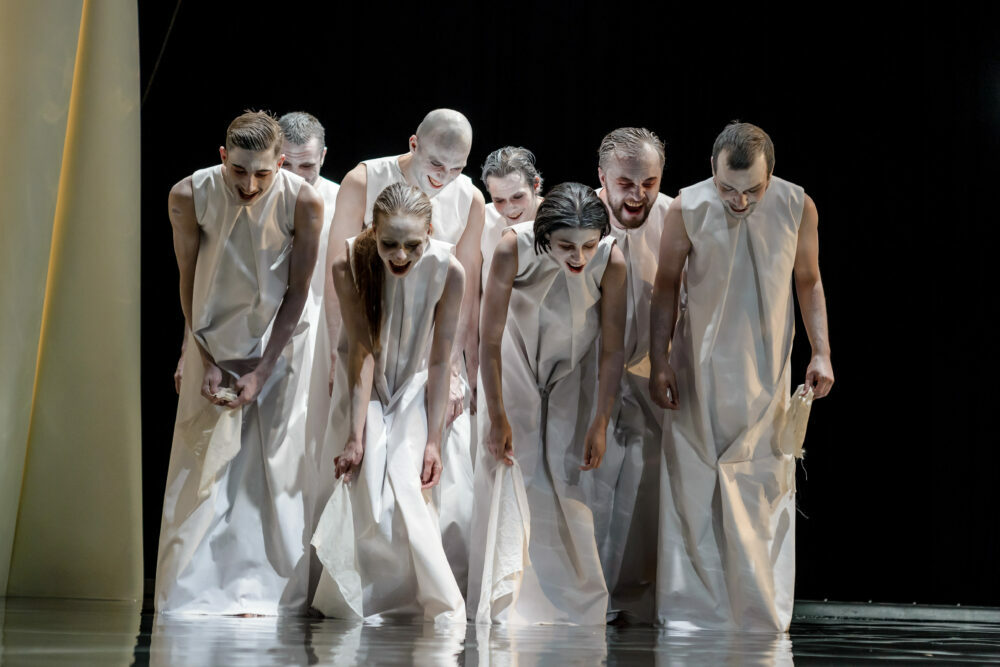 The ultimate threat to childhood, according to the production, is witnessing the cruelty of others, and the narrator (played by third-year acting student Mălina Lazăr) finds herself immersed in a world of extreme tension, sadness and decay. Despite her innocence, this child is continually confronted by the nightmare of lived reality, and her heightened abilities of perception make any attempts at detachment impossible. Panainte taps into the ambivalence inherent in the source text, and amplifies it as the defining note of her mise-en-scène. Preoccupied with painterly images, she constructs visually stunning tableaux that elaborate on the complex themes of Müller’s work without the ambition to narrow them down to one particular manifestation relevant only in the here and now. Thus, concerns with memory, history, identity, absence and the ephemeral establish intertextual links with other Panainte projects, and this staging of Müller evokes some of her other productions, such as the adaptation of Kafka’s The Trial (National Theatre of Cluj) and the collage based on the works of Romanian avant-garde author Urmuz (Teatrul de Vest, Reşiţa).

Fascinated by a sense of cyclical time, rather than its chronological counterpart, Panainte dramatizes emotional memory and braids snippets of seemingly fragmented action to foreground a stratification of history that in the director’s words is both ‘revelation’ and ‘concealment’ at the same time. Arguing that we can only find ourselves if we are able to return to our childhood, as a repository of potential resources and of revelations to come, Panainte has taken the directorial decision that all characters are mirror images of this child. This decision is motivated not by a desire to explore personal histories as such but by the endeavour to adopt a child’s perspective when it comes to engaging with the world and by addressing the impact of emotional and geographical distance from one’s homeland. Müller’s entire career is situated at the interface between two cultures and languages (German and Romanian), and Panainte herself was residing away from Romania at the time of conceiving the project. 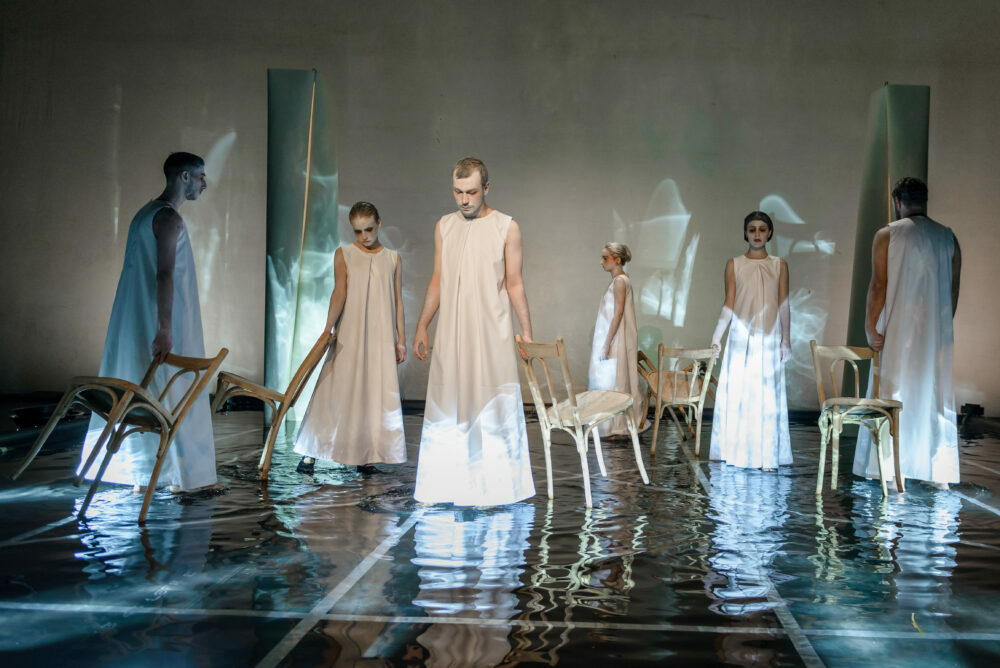 Visually, the production maps out this multiplicity by way of parallel reflections, of bodies in the shallow water in which the action takes place, and of repetitive physical actions that all characters perform. Panainte directs an ensemble of young performers, half of whom are still studying at the local conservatoire. In the original concept, the director imagined a scaled-up performance involving up to forty actors, but in its final manifestation the production succeeded precisely due to its studio configuration, juxtaposing nine performers in an intimate space, with water assuming the role of the tenth protagonist. Owing to its slippery qualities, water is metaphoric for ambivalence: it has the potential to reflect and amplify but also to modify and destroy; therefore, its connotations as a life-giving matter are doubled by those to the ephemeral and transient. The one association this water does not have, is with cleansing, as the iconic scene of the ‘Swabian Bath’ sees all members of an extended family immerse themselves one by one in the same tub of water, everything turning out black and opaque in the end. In one of the most tightly choreographed aspects of the show, the entire cast is seen pouring endless jugs of water as they move in circles, reflecting and amplifying one another’s movements until a ritualistic intensity is achieved.

The 7m by 7m stage is flooded with water approximately 10 cm deep, and surrounded by four tetrahedral columns in each corner. This minimalist space is the work of scenographer Dan Istrate, a trained sculptor whose main expertise is working in marble. It excels in juxtaposing lightness and fluidity with the material qualities of sculptural objects, as a visual counterpart to Müller’s lyrical text that offers a unique braid of extremely concrete details and deeply poetic images. As Istrate observes, his design was influenced by ‘the principle of mirroring, perceived as both a physical and educational phenomenon’. Drawing on the work of Gombrich, Istrate points out that we rarely tend to perceive mirrored images as optical illusion, and even though the reflected image undergoes transformations, we only notice these if involved in actual experimentation with the phenomenon. Thus, the reflection of the columns is temporarily disrupted as the actors keep moving about in the water, but it reappears time and time again once stillness sets in, or movement is directed to other areas of the set. For Istrate, childhood is a unique time when one’s personal mirror is being constructed, and the memory of childhood is that state of grace where we search for ourselves in reflection, attempting to come to terms with our own selves. 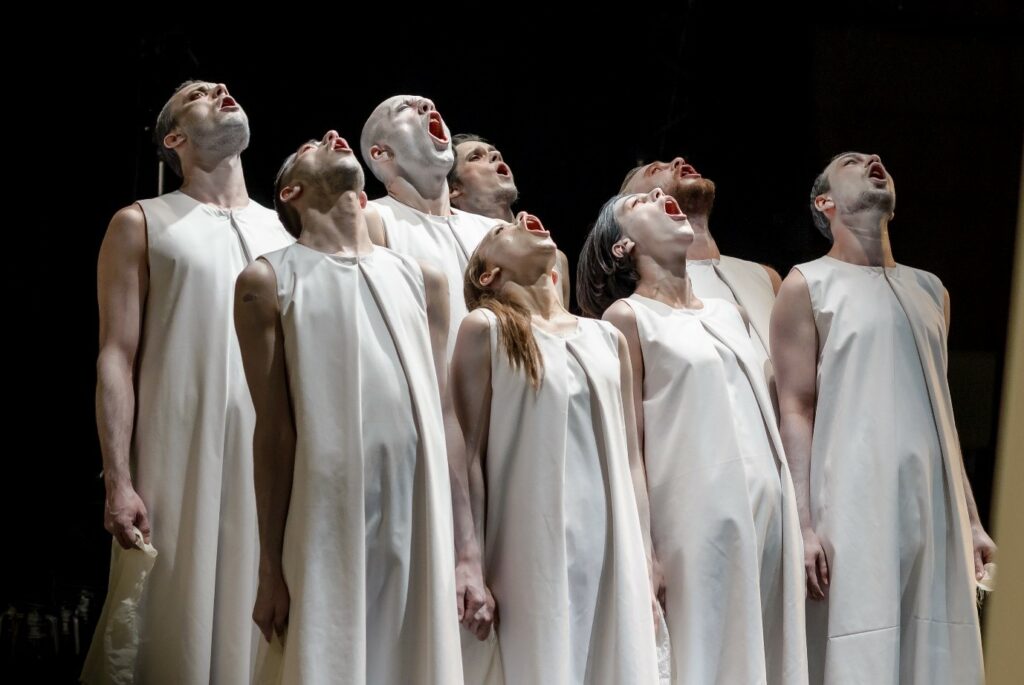 Ultimately, as Panainte argues, the performance space needs to have an organic and sensorial quality, able to conjure up a dreamscape. Although this set is constructed in a black-box studio, it is reminiscent of the site-specific environments the director often chooses for her productions, where light and shadow overlap, and where the stylised, draped costumes and the actors’ faces painted white evoke the menace and emotional distortion of expressionist cinema. Beyond this focus on the visual, the production bears the hallmarks of the director’s training in classical music. Created with the precision of a musical score, the production braids sensations, perceptions and stimuli that are aural as well as corporeal, and as the village world comes to life in the shape of a chorus from antiquity, the protagonist’s journey through childhood comes full circle. Despite fear and astonishment at events, the child sublimates personal experience into inner growth, and learns to live with the facts of, an albeit bleak and many a times uninviting, life. Witnessing this cycle conducted in a quasi-hypnotic mode draws in the audience seated at an arm’s length from the stage, spectators finding themselves tempted to reconstitute details of their own lives, and, arguably, interrogating their own often ambivalent and contradictory selves.

Adapted and directed by Mihaela Panainte

This event was co-produced by the National Theatre in Iaşi, the German Cultural Centre in Iași and the Goethe Institute. In repertoire in the 2018–19 season.