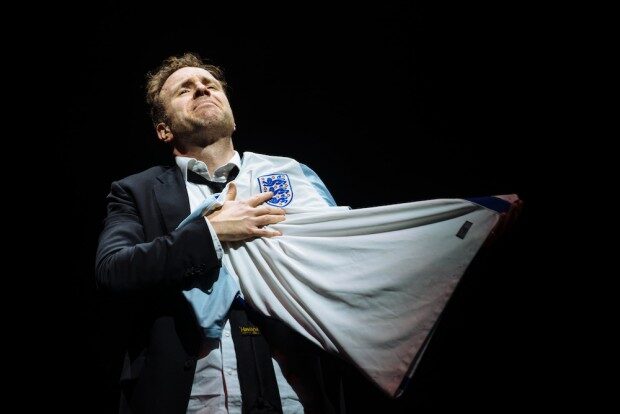 Is this an angry island? Although the British national character (if there is such a thing) has traditionally been one of reserve, repression, and restraint, more recently it has become increasingly passionate and full of anger: More a clenched fist shook in loud defiance, than a teacup raised in mild annoyance. Brexit hasn’t helped. It really hasn’t. In this new monologue, co-written by Roy Williams and Clint Dyer, the fury of the white working-class man is articulated in a rare blaze of insight — like a bulldog caught in oncoming headlights. Staged at the National Theatre, drama’s central forum for state-of-the-nation work, it stars Rafe Spall, who delivers a magnificent career-high performance.

The story has an archetypal simplicity: 39-year-old Michael is a failure. His life is one long loss. He’s lost jobs, his wife, and his football team (Leyton Orient) keeps losing. Deep down, he’s also lost his courage to face the world. Despite his bravado, his masculinity is built on shaky ground. When his dad, who runs a flower stall in the local market, dies suddenly during the England football team’s defeat in the 2018 World Cup, this unexpected loss is a catalyst for a bout of behaving badly: Really badly. Of course, being an English male, Michael’s first recourse is to drink, followed by a few sniffs of coke. By the time he gets to the funeral, in a crematorium, he is well and truly out of it. He should, reason tells me, just have a bit of rest, but he doesn’t. Instead, he decides to say a few words about his dad.

At this point in the 100-minute one-man show, we know quite a lot about his world. Michael tells us about his mum, a sour-faced bundle of pure fury; as well as about his dad, a traditional white working-class man, who votes Tory, reads the Sun and votes “Leave” in the EU Referendum. His views on immigration are rather predictable, but his racism is matched and sometimes exceeded by the prejudices of his son. All this, despite the fact that Michael’s best friend at school is Delroy, whose parents come from the West Indies. We also get sketches of Michael’s two sisters, Carly (who is like their mum) and Lisa (who mixes with middle-class liberals).

Williams and Dyer tell the story with enormous energy, the bruising speeches bursting out of humorous anecdotes about London life. At times the narrative is as tight as a strangler’s fingers around your windpipe, then the grip slackens as the words spew out like a drunk’s vomit, splashing everywhere. There’s a vivid quality to the writing that is both highly entertaining and definitely disturbing. Oh, Michael, Michael, what on earth are you doing? Then there’s a satisfying twist in the plotting that calls into question our assumptions about working-class racism and suggests that there was much more to Michael’s dad than at first meets the eye.

Some of the material is familiar: National identity is English, white and superglued to football, especially the World Cup. Inevitably, this is reminiscent of Williams’s 2002 play, Sing Yer Heart Out for the Lads. At the same time, the Brexit debate allows all sorts of ugly feelings to creep to the surface. Wait, did I say creep? No, that’s not right: those feelings of hatred and anger explode out all over the place. Williams and Dyer also push the argument about English nationalism beyond identification with “Engerland” soccer chants and show how it stems from the psychology of failure. There are several passages which ally the consciousness of national decline, firmly with fantasies of, and deep longing for, glory. Yes, glory.

Spall delivers all this in the performance of a lifetime. At first, he staggers on stage, as Michael appears drunk on the day of his dad’s funeral, then we get sharp snapshots of his substance abuse. To the sound of football chants, he puts on a white shirt and black tie, then roars into anecdotes, at first gabbling his words, torrents of them, then relaxing into the laconic ease of the man with a story to tell. Spall brightly mimics Michael’s friends, his relatives, and their relatives until interacting with the audience, who are close enough in the Dorfman space to touch. He offers people a sniff of cocoa butter or a biscuit. The crisis of masculinity has rarely been so personable.

What this bravura display suggests is that Michael’s life is itself a performance: He is playing the role of a white working-class man without really playing the part. Spall ever so subtly leads us into understanding the depths of his character: His confident exterior is a carapace, a shell that hides not just a vulnerable man, but a failure, a weakling, a person who believes in nothing. A big nothing. Spall makes this a compelling journey, full of humor as well as insight, ugly truths, as well as unexpected narrative, turns. By the end, there is even a distant gleam, like a light glimpsed in the middle of a night-time binge, of some kind of muted hope.

Spall is brilliantly served by Dyer’s directorial vision, which combines beauty and humor: at first, the stage, designed by Sadeysa Greenaway-Bailey and Ultz, is a large scarlet cross, like a flag of St George. Then, it becomes muted black, and Spall collects the necessary props from small cabinets above the audience, spaces that allow for brief projections (a picture of his meal for example). Some of these props are simple illustrations of the story, as when a Jamaican patty is used for an anecdote about Delroy; others are more symbolic, as when parental love is evoked by two white mugs, each bearing a big red heart.

At one point bananas fall from the sky, as if pelted onto a football pitch by racist hooligans; there are flowers in tin vases; then an urn holding dad’s ashes. Beautiful touches include using the blackhead of Nefertiti for Delroy’s mum and a golden plate with a Medusa-like image for Michael’s mum. Carly is represented by a stuffed bulldog toy, Michael’s dad by a shirt with three lions. There’s a shocking blaze of fire that introduces the crematorium scene, and a powerful music sequence as Michael descends into the underworld, like a figure in a Greek tragedy. By the end, we get spat out — lacerated by anger but also heartened by the emotional intelligence of this brilliant show. And by the great irony that one of the most sympathetic and humane plays about racism has been written by two black men.

Death of England was at the National Theatre until 7 March.

This article was originally posted at Sierz.co.uk on February 6th, 2020, and has been reposted with permission. To read the original article, click here. 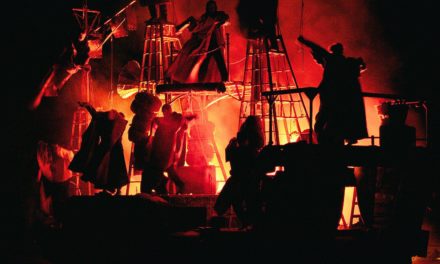 Theatre Against Non-Human Reality: A Few Sentences About the Theatre of the Eighth Day