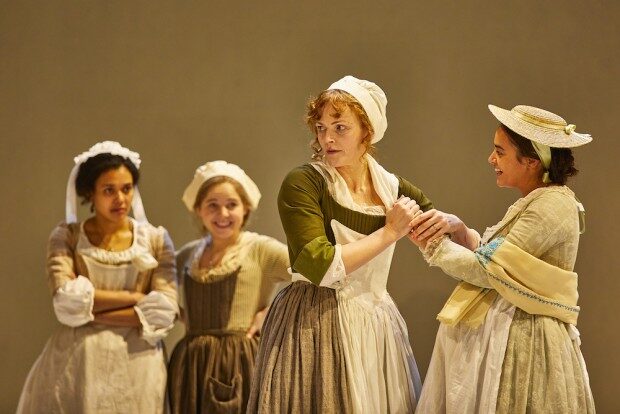 Maxine Peak and Aysha Kala in "The Welkin." Photo by Brinkhoff-Moegenburg.

History plays should perform a delicate balancing act: they have to tell us something worth knowing about the past, that foreign country where they do things differently, and also something about our current preoccupations. Otherwise, what’s the point? So the fact that playwright Lucy Kirkwood, whose Chimerica was a rocket that brilliantly lit up the sky in 2013, has set her feminist play about women’s bodies and female experience in the mid-18th century raises expectations that it will also say something about the #MeToo movement and our contemporary anxieties about gender issues. At first, the portents here at the National are good: it stars Maxine Peake, a feisty female voice if ever there was one.

Set in March 1759, somewhere on the border of Norfolk and Suffolk, The Welkin tells the story of Sally Poppy, a young woman arrested for a particularly brutal child murder. She did not, however, act alone. Her male lover, who was also involved in the killing, is immediately tried and hanged: 18th-century justice was quick and brutal. But although she is likewise condemned to death she “pleads her belly”, meaning that she claims to be pregnant. In those days, while the law had no qualms about executing women, the idea of killing an unborn and therefore innocent child was sufficiently unacceptable to allow for the woman to have her sentence commuted to transportation to the North American colonies.

But how does the law know if a woman is pregnant or not? In this case, a jury of 12 women is empaneled and instructed by the magistrate to investigate. Mrs. Charlotte Cary, the widow of an army colonel, is empowered, because of her class, to be the “fore-matron” and to conduct proceedings. As in the case of Reginald Rose’s 1954 story, Twelve Angry Men, the jury represents a variety of characters, social types and points of view. The most significant woman is Elizabeth Luke (Peake), the local midwife, who remembers bringing Sally into the world and is determined not to let her be hanged. But she has a struggle on her hands.

This is because Sally is an angry woman. No, a very angry woman. Not only is she a criminal, but she is also unhappily married and dreams of running away with a fantasy, Satan-like man, a person who will indeed lead her into temptation. She is also uncooperative and makes no effort to be liked by the other 11 women. Yet Elizabeth perseveres and tries to convince the more skeptical or hostile women that Sally is pregnant. As the women swap experiences of childbirth, waver in their opinions, change sides, get swayed by reason or express their hatred of the outsider, various details of their past lives emerge, and skeletons come flying out of the cupboard with all the grim speed of a body falling down a trapdoor. Towards the end, the jokes fall away and the material becomes increasingly harrowing, rising to a rare pitch of cruelty.

By the end of this three-hour marathon, there are enough twists to make a hangman’s rope; at the same time, Kirkwood paints a vivid picture of women’s experience as this jury talks and debates Sally’s fate. Not only is there plenty of material about childbearing that applies both to contemporary women and to the women of the past, there is also a wealth of detail about the symptoms of pregnancy, as well as descriptions of religious ideas, superstitious beliefs and the poverty of everyday life some 300 hundred years ago. Bodily fluids are candidly discussed, as you would expect, but there are also surprises. At one point, a feverish woman is bled and recovers. The arrival of Halley’s comet is alluded to, an angel is glimpsed and witches murmur on the sidelines, and there are mentions of wars with France, colonial expansion, the enclosure movement and the condition of female servants.

For us today, the discussion of the female body as a contested site seems immediately relevant, as is the representation of women’s testimony and popular delusions and fantasies about demons and other examples of unreason. A suspicion of the blood-lust of an unruly crowd feels very now. More provocatively, a women’s right not to keep her child is a central plot point and the male gaze is part of the storytelling. The victimization of women comes across strongly, and the arrival of a male doctor is seen as carrying more authority than the voices of ordinary women. Yet it is also true that men are told they must listen. In the dialogues, Kirkwood mixes historical phrases — such as “Here we be” and breasts being “a pair of churks” — with more contemporary formulations, such as “I’ll kick your cock into your kidneys”. The title of the play is an olde word for sky or firmament.

There’s some fun to be had from Kirkwood’s evident joy in writing putdowns, and some of her lines are memorable: “Nobody blames God when there is a woman to blame instead.” While she uses some old East Anglian vocabulary, she also gives the piece a light sprinkle of deliberate anachronism: don’t be surprised to hear mention of airplanes. Her portrait of Elizabeth is affectedly tinged with rage. All this is good, but anyone looking for subtlety in the gender politics of the play might be disappointed: here all men are bad. There really is no nuance. And, in contrast to Morgan Lloyd Malcolm’s Emilia, there is no uplifting ending. In fact, I cannot see what is empowering about showing how all women have to be victims. Always. It’s as if feminism never happened.

James Macdonald’s production begins with a breathtaking tableau which shows women at work, then plunges us into a crepuscular candle-lit scene before finally confining us in a wide large room, decorated by a designer Bunnie Christie in tasteful greys. He manages the dramatic highpoints — such Sally’s attempt to produce milk, followed by an explosive plot twist — with finesse, but he really does not serve Kirkwood’s text very well. All the actors speak in a bewildering range of variable accents, with neither consistency nor clarity. Many passages are completely inaudible; a lot of detail simply gets lost in the demented naturalism of the show. It’s a real strain to watch. This is a pity because, due to this fuzziness, it’s hard to be sure exactly what the play is saying. Could we have some surtitles, please?

Still, the acting is first-rate. Although Peake’s Elizabeth starts off as the voice of reason and has this actor’s trademark, and likable, down-to-earth sense, the plot is an accumulation of incidents that seem, with only the occasional exception, to prove that women have always lost out, and the final ghastly tragedy feels like it’s completely drained of both hope and mercy. It’s a really tough ask, this play. Ria Zmitrowicz does her best to give Sally the necessary aggression and passion but, like the other women, her voice is not often clearly heard. Of the rest of the large cast, I was particularly impressed by Cecilia Noble as the bigoted but dignified Emma, Haydn Gwynne as a commanding Charlotte Cary, Brigid Zengeni as the mute Sarah Hollis, Wendy Kweh as the childless Helen and Dawn Sievewright as Scottish Kitty Givens. I really wanted to love this show, but the muddy production makes that very hard labor.

The Welkin is at the National Theatre until 23 May.

This article was originally posted at sierz.co.uk on January 22nd, 2020, and has been reposted with permission. To read the original article, click here.