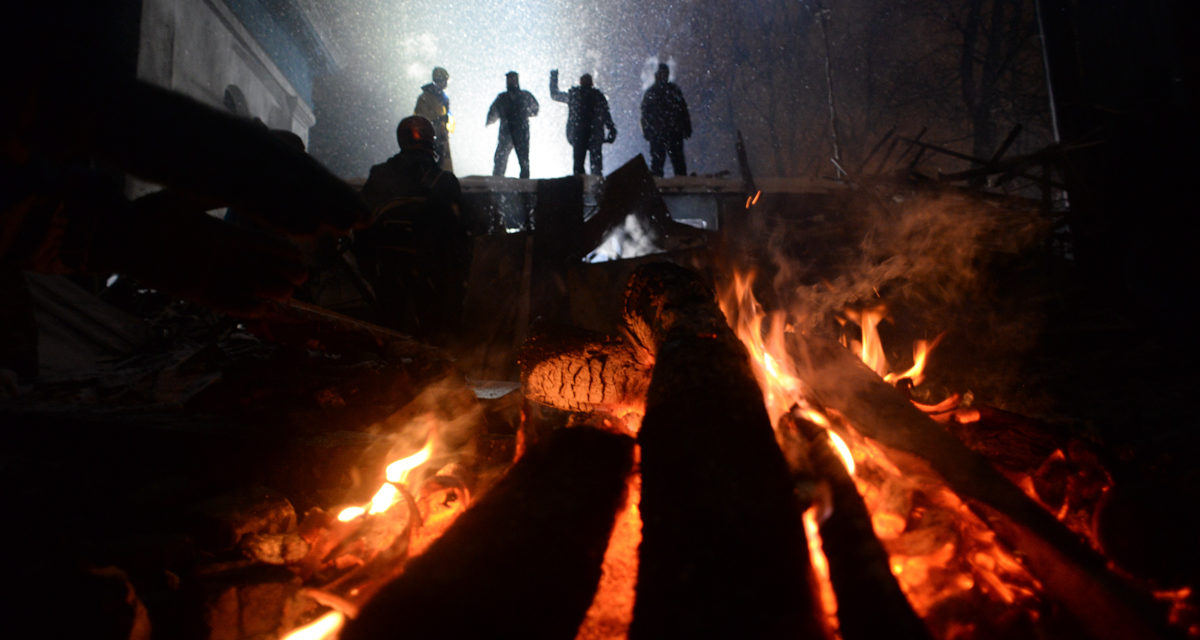 In the whirl of passions and emotions that are still boiling up around the Revolution of Dignity it is hard to overestimate the reasonable objectiveness of documentary theater. For according to the rules of this kind of art, only fact, evidence, live voice are important here, which must be reproduced without any censorship and ideological distortion. The Diaries of Maidan provides a unique opportunity to get to know different stands, polar thoughts concerning the events of the past months which are painful for every Ukrainian. According to Vorozhbyt, the authors, when they were collecting the material, spoke both with students, cruelly beaten by Berkut police during the peaceful protest on the night of November 30, and Cossacks from the ranks of Maidan’s Self-Defense, who live according to service regulations of Zaporozhian Sich, the boys who built the catapult in Hrushevsky Street and were daringly throwing Molotov cocktails at the armed policemen, and their girlfriends, who brought to them the bottles with explosive liquid, the volunteers of kitchens and medical centers of Maidan, who did not work by the hour, but as long as they had physical strength. They also talked to people who hate Euromaidan and call the participants of the revolution “maidanuti,” which means obsessed with Maidan. Natalia admits, “The authors of the project have one drawback: we support Maidan with our heart and soul and are direct participants of the events. The main tasks were recording of reality and momentary reflection. The play does not have a final, like the struggle of Ukrainians for independence and justice.”

A very important fact is that the open readings of the text in Kyiv are the fourth public presentation of The Diaries of Maidan. It will be recalled that in the end of February it was read for residents of Kherson at the festival Liuty/Fevral (Ukrainian and Russian words for February), and at the beginning of March (within the framework of the project “New Play” at the festival Golden Mask) in Moscow-based Teatr.doc Andrii Mai and Natalia Vorozhbyt organized the reading and discussion of the play. At the end of the month in Polish city Gdansk on the initiative of local culture activists, the European Solidarity Center, and city authorities the theater readings of Natalia Vorozhbyt’s The Diaries of Maidan and Dmytro Levytsky’s documentary play Blue Bus, which is as well dedicated to the struggle of Ukrainians against corruption and arbitrariness of power, were held.

These travels of the documentary theater are no less important than the diplomatic missions of the highest levels. The reason is that such artistic actions create a unique situation of a dialog with the audience, when after the reading the audience has an opportunity to ask questions to authors, express their opinion about the play, share doubts and reflections, draw parallels with own experience and own history. Dramatist Tetiana Kytsenko, who together with the rest took part in scenic readings in Gdansk, tells namely about the lengthy discussions in the final. Tellingly, Poles took interest not only in the play, but also current events in Ukraine, current state of Maidan, predictions, and prospects for the future. And this sincere interest to the life of Ukrainians, shown both by Poles, and Moscow residents is more eloquent than rhetoric of politicians. I am sure that with time The Diaries of Maidan, as well as the rest of artistic projects initiated by the revolution will only acquire new important qualities and additional value. For we will have to tell many more people about what happened and is still echoing in the country. Most importantly, we should ponder ourselves and see into the principle nature of the changes which have taken place above all in the minds of citizens, whose unique voices are documented in The Diaries of Maidan.