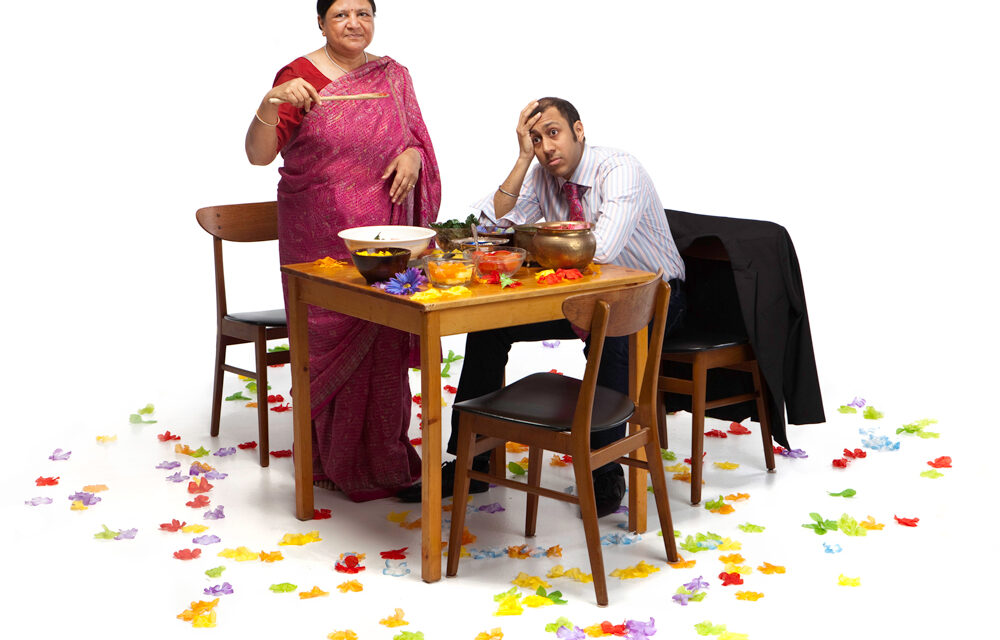 “You are not here to see a play. You are here to see me settle a dispute with Ravi,” Asha Jain, real-life mother of actor, director, and playwright, Ravi Jain, says at the top of their devised performance, A Brimful of Asha. And what a beautiful, engaging, funny, heartbreaking, and heartwarming dispute it is.

Delightfully, casually, and eloquently, Ravi and Asha tell the story of how, as is traditional in Indian families, Asha and her husband have tried for years to find a wife for Ravi, who is consistently resistant to their efforts. Wanting to focus on his artistic career and find a partner organically, Ravi presents his frustrations with his parents’ meddling. A Brimful of Asha is an apt performance to be featured at Emerson College for students who may be feeling their own generation divide between themselves and their parents, as both Ravi and Asha present the justifications for their positions so beautifully and honestly in what is ultimately a debate on how best to navigate life in which no one is right and no one is wrong.

The lights come up at the top of the performance with Asha sitting in a red sari at one end of a long table set for two. On the other side of the table, Ravi stands, leaning casually against his chair where he stays for most of the show until Asha eventually commands him to sit. From the start, it is clear that the two have a loving, playful relationship. They are constantly poking easy fun at each other, making the audience laugh with them. While the story in the play is scripted, there are moments of delightful improvisation throughout with Ravi correcting details in his mother’s stories and Asha adding new commentary on Ravi’s choices. In these moments I felt almost as though I was in their living room in the way that they lowered their voices as they turned to each other, laughing. As they explain throughout the show, it was Ravi’s idea to bring their story to the stage, and he drives the performance with his confident, jovial personality while leaving plenty of space to feature his mother’s stories and opinions. Asha never claims to be a performer, and while she is clearly not as comfortable on stage as Ravi, she is instantly endearing and lovable.

Together, they unravel their dispute through the telling of an incident from several years before: as Ravi travels around India with a friend before teaching a theater workshop, Asha and her husband work hard to secure a Ravi a bride. Ravi is clear that he does not want his parents to continue to interfere and as a young woman, I find myself automatically agreeing with Ravi’s perspective, deeming him in the “right” from the beginning. I, personally, was raised Catholic, and there are certain expectations in my family surrounding marriage and relationships – expectations that I do not want to conform to. But, as Asha jumps in and explains her argument and reasons for her actions, it becomes much easier to understand and sympathize with her position. Ravi says while he feels caught between two cultures, he is not bothered by the fact that he does not yet have a wife and he is satisfied with his decision to work as a professional artist as opposed to taking over his father’s business. It’s his life after all. But Asha explains how those decisions affect the way that she is perceived in their social circles. Asha sees that family and friends blame her for the fact that Ravi is not married. They view it as her shortcoming and are constantly giving her advice for how to get Ravi married and accepting a role at his father’s business. Further, Asha explains Indian customs and traditions that dictate how people can best live their lives to ensure satisfaction in this life and good reincarnation in the next. There are stages of life that should be followed for a well-balanced existence and by resisting marriage, Ravi is messing with those balanced stages. She continues to push marriage prospects because she is concerned for his well-being.

As the climax of their arguments unfolds – a screaming match between Ravi and his mother held over the phone that left Asha sobbing in Toronto and Ravi guilt-stricken and out of phone minutes in India –  Ravi and his parents make a determination to sit down in person and talk everything through. The fact that they were able to work communicate through their differences in opinion and continue the relationship with love and understanding even as they disagree is so inspiring. So many people can relate to that feeling – at once furious at one’s family for their beliefs and yet bound by love – and Ravi and Asha express it beautifully. A funny, poignant discussion of one family’s values and disagreements that is at once vibrantly unique and deeply relatable, A Brimful of Asha is a must-see.