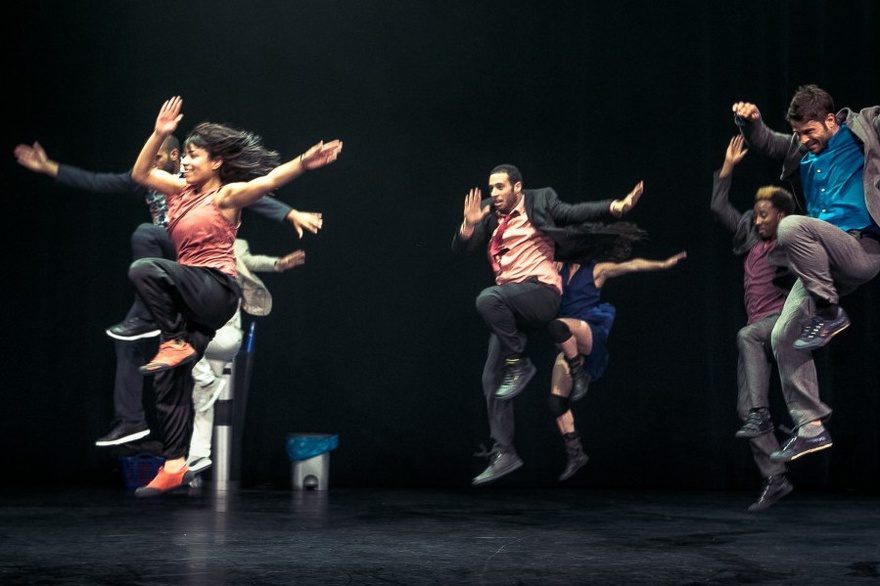 I tend to shy away from western-Arab collaborations. I tend to be skeptical, as are others I am sure, of western interpretations, fetishizations, and orientalizations (and so on), of the complexity of local contexts and traditions. This was the reaction I had when I first saw the announcement for the show Badke, at KVS theater in Brussels. To quote the curatorial text, the performance was a collaboration between Koen Augustijnen, Rosalba Torres (Les Ballets C De La B), Hildegard De Vuyst (KVS), and ‘ten Palestinian performers, young autodidacts from various disciplines including contemporary dance, hip-hop, circus, and so on.’ The performance itself is a contemporary dance interpretation of the folk dance Dabkeh, traditionally performed in wedding parties throughout the Levant.

I was invited to attend the event, and I went alone. These loner attendances can come with pleasant surprises. Mine was to be sat next to one of the ex-dancers, a young man named Yazan Ewaidat, who was from the first generation of the Badke troupe, and so my experience was somewhat animated with a sideshow of chuckles and some suspense.

The performance itself was a surprisingly interesting contemporary adaptation of the traditional folk original, in that it embodied the strength and energy of the ritual by isolating the key elements from which contemporary adaptations were recomposed for the choreography. As many folk dances go, Dabkeh is not a complicated dance. It requires stamina, but otherwise, the moves are simple. Its basic element is in the dance’s formation: classically a line and circle group dance, with arms inter-laced across each other shoulders, moving together in a circle through a series of leg movements, and heel stomps. The group leader, whom I know to be called a Laweeh (which probably comes from the root word lawwa, to point out), leads or interjects with solos, and commonly rotates a stick, worry beads, or a headscarf in one uplifted hand. Occasionally calling to the group with encouraging loud shouts of ‘heey-yah,’ while putting on an impressive show of jump/squat/jump movements, the dance is a display of manhood strength and vitality.

Badke took the basic elements of Dabkeh and isolated them into choreographed sequences that extended and repeated throughout the performance. The ritualistic semi-circle collapses into a pile and unfolds again, moving from the traditional to the contemporary. Styles move in fluid motion: Dabkeh transitions to popular Arabic dancing, and transitions again into Hip-hop. This mish-mash pushed the performance beyond a didactic relationship of old and new, and embraced the diversity of dances in today’s social setting, especially for the younger generations. Smartly conceived, the narrative of a wedding party brought the performance together in a loose story of courtship, flirtation and ensuing jealous quarrels. Men perform feminine moves, and gender roles were sometimes confused through movement.

Then all of a sudden the power cuts. The music stops abruptly, leaving dancers and the audience with a moment to catch their breath, creating a stark contrast between the movement and absolute silence. The performers have a drink of water as they wait patiently (and knowingly) for the problem to be resolved. It should only take a few moments, and the fiesta is back on track in the same full force from where it left off.

The music is an endless repetition of a single kitschy electronic pop song by Naser Al Faris, a popular singer in Palestine. The song has barely any lyrics, and by the last 15 minutes of the piece, its repetition becomes irritating and tiring. This is where Badke’s conceptual framework begins to unravel, in how it mirrors the absurdity of the context of Palestine: Life as an endless loop of the same unresolved reality of occupation, with no end in sight, masked by daily rituals of normality that border on performativity.

In this context, the strength and vitality of the dance is a gesture of resistance, the need to dance to keep living, to feel alive despite the reality. Dabkeh is, in fact, one of the symbols for Palestinian culture that is guarded and perpetuated as something that cannot be appropriated by Israel, as other forms of Palestinian heritage have been taken, including foods, archeology, history and of course the land itself. Only subliminally did the piece gesture towards violence, mostly through interjected actions mimicking arrests, which are not unlikely even at a wedding, given that the IDF would be more than happy to crash a party. Sensibly, these gestures remained between the lines, and the performance centered on the dance and its context as the core of the work.

Yazan, who was sitting beside me during the performance, later explained that he was chuckling at the moves the performers choreographed together, and the inside jokes that came out of exploring the absurdities of what is known to happen in a typical wedding. This was a sign of the collaborative process contained within the piece in terms of the areas of knowledge that each person brought with them to the project. Both Palestinians and Belgians contributed to what was ultimately a group collaborative choreography produced from knowledge exchange. As for my own skepticism on the note of “West works with East,” I left less pessimistic, although I would have preferred a more clear articulation of the forms of collaboration involved, so as to avoid a reading of the performance through the themes of exoticization and appropriation.

This article was first published on www.ibraaz.org. Reposted with permission of the publisher.