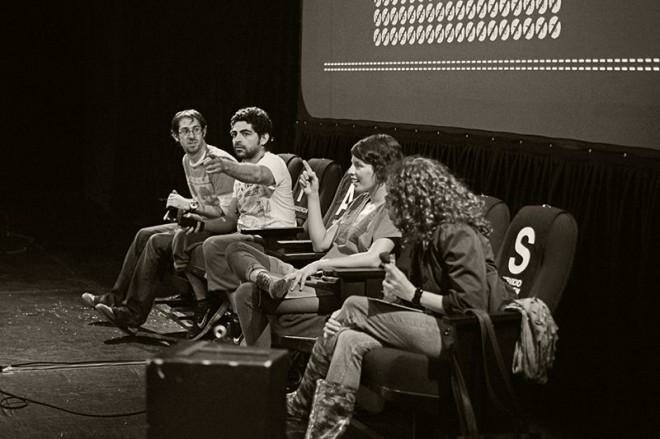 Pending Vote is a fully-interactive performance from Catalan director Roger Bernat, with a text by Roberto Fratini, based in Spain and supported by the European Theatre Programme ‘Interreg IV.’ Bernant has been creating experimental theatre shows that place the audience at the center of the action since 2008, creating an assembly of debate, opinion, and challenging. The production, described as ‘the theatre being transformed into parliament’, comes to Dresden for the annual ‘Our Stage’ festival.

The audience is seated in a hall on three sides. In front of them is a large, cinema-like screen. During the performance, the screen will ask the audience specific questions of various types. Each audience member holds a personal device which is given to them on the way in. The devices, which have mealy two buttons – ‘yes’ and ‘no’ – are used for voting during the performance. The screen, or the ‘system’, will ask questions: for example: ‘who do you prefer? The Beatles, or the Rolling Stones?’ The audiences are timed for their answers, and then, in a paralleled, democratic manner, choose a majority or can choose to abstain. The questions are not always so simple, and as the performance unfolds, the audience is divided (by the system) into pairs, and then into four large groups, and a pressurized state of debate and negation must begin.

This type of participation from the audience creates a real sense of engagement and excitement, as last night’s performance of Addressless also proved. The element of control creates a sense of impulsiveness. However, this time around, there are no performers. The audience actively becomes the performers of the piece. It reminds me, in a way, of the route of participation I once described in an article on Disneyland. An artificial world with its own rules, democracy, and system, is set-up in this performance space, and without hesitation, the audience seems to buy into it. This willing negotiation is invisible, but it’s the negotiation that audiences agree upon when they buy a ticket.

Is this viewed as a production which questions the function of the voting system and the way that certain countries and cultures run their democratic system (if they have one)? What is certain is that the outcome of the audience dynamic will certainly be different depending on the demographics. Here, it is primarily a collection of artists and avid theatre-goers. But how would questions on the basis of healthcare, for example, fair in the United Kingdom? Many of the questions posed at this particular performance were German-related. Therefore, it’s no wonder that many abstentions were reached when knowledge became thin.

In our post-show talk, what was certainly a general consensus is that the voting system became less optimistic and much more challenging when the vote was given to a larger group of (primarily) strangers who had to force a democratic system of voting onto themselves in a short time frame. One question that is asked is: should the voting return to the voice of the individual? In my mind, yes. And the reason is that a much more efficient and productive way of reaching decisions was made this way.

The downside is that each question posed to the audience in this performance was a simple YES or NO answer. As we know, from the politics of the world, some of the arguments posed don’t necessarily have black and white answers. Therefore, was a fair and just system of democracy established within the performance space? I don’t think so.

What might have been a determent of enjoyment for some audience members (and indeed, the seed of frustration and anger for others), is that the questions are worded in a complex English vocabulary. A clear understanding of the audience in the room was missed due to English really being the second language. As such, misinterpretation meant that honest and faithful playing to the game’s rules was lost. Others expressed the frustration with the short timing of each question as if five seconds was not enough to answer the hypothetical question of: ‘would you kill?’ But the interesting flip-side to this is that impulsiveness encourages honesty amongst the audience, and whilst some may not have fully comprehended what they were reading, they were nonetheless forced to act on impulse, thus revealing something a little more honest about themselves; myself included.

I have always been interested in the mechanics of the artificial world, and Bernat has explored this clear and effective. Ultimately, democracies such as the one created in the performance space continue to be challenged and embraced, and whilst the conclusion of ‘the system is playing you’ might not necessarily be the most enlightening or shocking conclusion in our world right now, it is a small realization that our votes, whatever they might be on whatever subject, are still pending.

For more information on the festival’s events, visit: https://www.staatsschauspiel-dresden.de/home/our_stage_buergerbuehnenfestival_2019/ 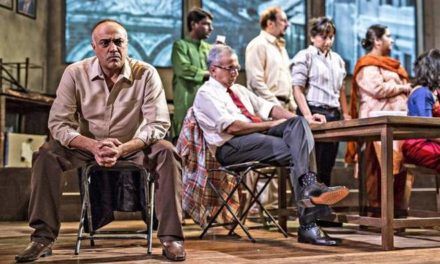