Utilizing downtown Manhattan’s East Village and NoHo as a set, Bated Breath Theatre Company’s “Chasing Andy Warhol” immerses audiences into the glamorous world of one of the most important artists of all time, Andy Warhol. His works of modern art continue to sell for hundreds of millions of dollars.

The audience yields to art in transit as scenes derived from Warhol’s mysterious life spring up on the streets and in secret spaces. In the spirit of creatives shaking up the art scene, Executive Artistic Director and lead writer, Mara Lieberman comments on what the audience can expect from the moment they arrive:

“They can expect the unexpected. They can expect to be surprised and they can expect to have moments of wonder and wondering who is in the show and who is not in the show. One of the most exciting things that happens is watching New York interact with the show and the audience being like: ‘oh, is that a character or a paid actor or is that New York or is that a spectator?’ So the blurring of the boundaries of what is performance and what is everyday life Is something that happens in this form and in this structure,” said Lieberman.

Amid a community of pioneering artists and innovators, the opening scene begins at 26 Astor Place at the Cube below the offices of social technology and artificial intelligence companies Meta and IBM Watson. Timelines converge as distinctions between audience, performer, and location blur. Edie Sedgwick, one of Andy Warhol’s superstars, and a myriad of other characters emerge in full 1960s 1970s and 1980s regalia. The effect is mesmerizing.

Blending the boundaries among high art, commercial art, and low culture, the multimedia experience embraces the authentic character of the iconic artist.

“We think it’s really important to try to capture pieces of Andy Warhol that are not as well-publicized. Not always in the canned interview. You have to turn over a few more rocks. You have to try to understand about the human being and what motivated his iconic work that influences us every single day,” noted Lieberman.

The chase leads to all sorts of places by way of a curated selection of immersive theatre, dance, film, art, and puppetry. Working in partnership with those who complimented his own, Warhol envisioned New York City as a playground and canvas. Much like Warhol himself, the actors who portray the raw-edged models, artists, socialites, and movie stars stand out, emanate a presence and really make an impression.

In transporting audiences to the intimate universe of the most influential artist of the 20th century—Andy Warhol—courageous choices were necessary.

“Andy really looked at every day life and wanted to I think shake up the mundane. Shake up the things like the soup can that you see this in front of you all the time and make you go: “is this soup, is this art?’ And I think there is a way in which we try to do that with the City and wake up your experience of being in the City with other human beings.”

Canvasses of Campbell’s soup and other recognizable styles from the world of advertising and popular culture connect spectators to realms of yesteryear. The “Glorify your hair with Halo” campaign emanating from a store window was particularly exhilarating to experience. The most fascinating characters in the cast are played by Annika Rudolf and Brandon P. Rains. 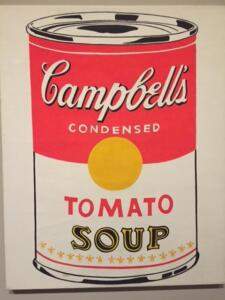 A stroll along the Bowery alongside Warhol’s entourage of rock stars, outcasts, Hollywood celebs, aristocrats, and intellectuals, the audience attains a prime spot on Great Jones Street. Legendary histories and branded personalities are explored by means of performance and dance near the studio loft where Warhol and Jean-Michel Basquiat painted.

Warhol’s excellent foresight into society’s aspiration for recognition and distinction is In full view. Across the storied thoroughfare on East 3rd Street, The Bowery Hotel is abuzz with paparazzi, image-makers, and bohemian denizens snapping photos. Others surf the web, swipe, scroll through social media feeds, and stream quirky content on their smartphones. The lure of celebrity and fame is evident. 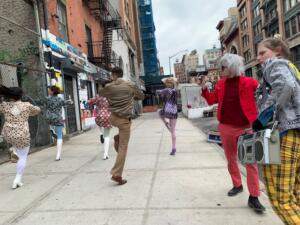 A harmonious blend of art, culture, and dance pops up on Great Jones Street in Chasing Andy Warhol. Photo By Alexander Fatouros.

Holding up a mirror to contemporary society, Lieberman illustrates why “Chasing Andy Warhol” is significant in the 21st century.

“For lots of reasons that I mentioned but also because I think that he was the forefather of social media. And there’s something that happens in social media that you know in our pic or profile picture we frame up the self in a certain way that which we want to brand. We brand ourselves in the same way Andy very consciously branded himself and knew how to make the brand, sell the brand, create the allure, the appetite, and continue to sell. We do the same thing with ourselves. We keep out of the frame the uglies, the things we don’t want everyone else to see, which is really where the juicy parts are and probably the truth. And Andy did this as well. And Andy it was very important for him to keep the frame around himself very tight and very select so that people didn’t know some of the darkness and unrest in his soul. And he deflected a lot of that pain into his artwork. So I feel like now the way we relate to technology we are all so branded.” 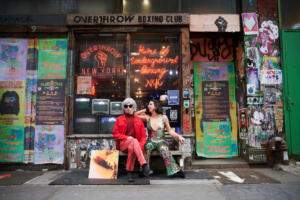 Annika Rudolf at the crossroads of NoHo and the East Village in Chasing Andy Warhol. Photo By Alexander Fatouros.

When it comes to stagecraft and striking an artistic conversation with the audience, the production is groundbreaking. The techniques employed merge the elements of popular culture, consumerism, and materialism seamlessly.

“We are a brand. We are a product. I feel like Andy was this soothsayer of this so many years ago. It is just mind boggling to me. And that’s what the last scene is really all about. He dined out on us so to speak. And yeah, I think that it’s really relevant because he could sniff this in the air and I guess, you know there’s a part of me that’s like wanting a little bit of a healing journey. One wonders whether he would have expanded his frame to include a little bit more of the parts that he wanted to hide from people then maybe his life would’ve been more fulfilling to him and I’m not saying it wasn’t I don’t know. But, I wonder about ourselves as well, you know? in our lust for renown and celebrity and recognition you know? What parts of ourselves that we’re not showing and cutting off and what does that do to ourselves? That kind of repression,” affirmed Lieberman.

At its core, emerging technologies are fundamental in telling this story.

“Technologies are used in order to support experiential transportation. If we want to create a feeling of change in time and space or going on some kind of journey to the past. Technologies can be really useful in doing that. The history of technology is really embedded in the story of Andy Warhol. He was the first person I think that took a technological device, which was his tape recorder, he called it his wife Sony. And brought it into a place of intimacy in his life. So if you think about how we are with our cell phones we are probably sometimes more intimate with our cell phones than we are with our partner laying right next to us. And what’s really interesting to me is the way he brought technology and humanity together or he viewed technological objects with a lot of humanity. And we try to do that as well with some of the stuff that you see—the projections and the TV screens in the window and the live-feed camera where the audience gets to see themselves. And hopefully we bring this kind of curiosity and love for pushing technology with some of the thematic elements about people being famous for 15 minutes and the narcissism that these technological objects have brought about or that they have invented in the way they function so you know it’s all in service though to the theatrical journey. It’s never about: ‘hey we have this cool thing we have this new cool device we really just want to use it’ it is always about: Is this driving the narrative? Is this elucidating something that we didn’t think of? So the technology should serve the art,” said Lieberman.

On reconnecting the neighborhood to seminal figures of the past, Lieberman gives another account—namely, the award-winning production Voyeur: The Windows of Toulouse-Lautrec, which turned the West Village into Paris in 1899.

“So when I made ‘Voyeur: The Windows of Toulouse-Lautrec’ in the West Village, which was the longest pandemic-friendly show that ran through all of the pandemic. I started being very interested about this form—of making theatre on the streets of New York. And colliding New York with content and narrative from the past about artists. And when I walked over (we took some walks) to the East Village with my friend who was working on that show. And he was like, we just thought like Andy Warhol’s descendants are running around in the East Village, the Cube, you know Cooper Union right there, NYU. I feel like all of Andy’s little grandchildren are running around and that the way we understand art and our relationship to art and technology and culture and I can go on and on were really started by Andy Warhol,” expressed Lieberman. 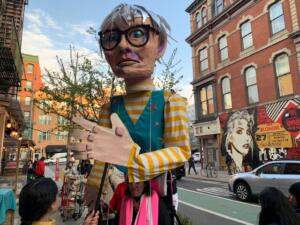 Intimate and contemporary, Chasing Andy Warhol delights and surprises at every turn. Photo By Alexander Fatouros.

Witty and powerful, the play much like Warhol’s art embodies an enterprising ingenuity highlighting the need for joint endeavors to achieve goals. The expression of the human spirit ascribed to Warhol continues to invigorate our senses on a global scale. Warhol’s legacy endures.

“We see the residue and inspiration of Andy everywhere in the East Village. The desire to create something new. The desire to activate your environment in a way that makes it feel alive and cutting edge and dangerous. And the way the audience felt as part of something bigger than themselves when they were with Andy whether they were at The Factory or Studio 54 or you know just filming a film. Andy really opened up the frame and the lens to include lots of different people and lots of different pieces of life. And we feel like we are doing that and the East Village is a perfect place to do that because It really feels like the seed of creativity in terms of groundbreaking work and people using Andy as an inspiration quite openly to create that. Whoever is the next Andy Warhol, that person is probably running around down here,” expounded Lieberman.

Fun, hugely powerful, and sure to amass a cult following, “Chasing Andy Warhol” not only hits the mark but also boosts the Big Apple’s standing as the capital of the art world. For all the delicious details drop by Bated Breath Theatre Company. 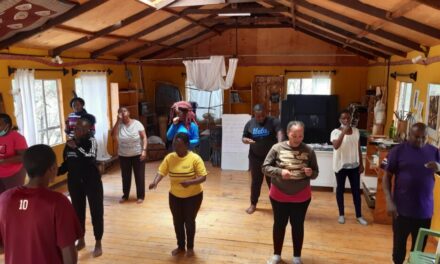