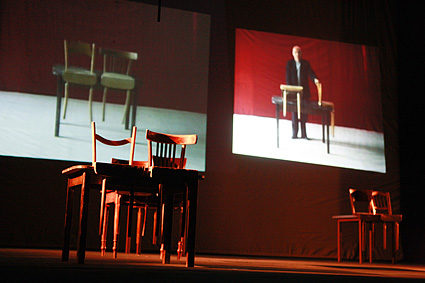 The group of visual artists and actors who comprise the surrealist dance-theater Teatr “Cinema” Michałowice have been living and working in an enormous cabin in the mountains outside Jelenia Góra, in the tiny town of Michałowice, Poland, for the past twenty years. The company rehearses on the large Marley-covered floor of the living room, with windows overlooking the mountains. Artistic director Zbigniew Szumski (also a graphic designer) and his wife and co-director Katarzyna Szumska (also a painter) live upstairs. There are two floors of guest rooms.

Twenty-four hours in the Michałowice house makes it clear that, for this theater, surrealism is more a way of life than an aesthetic. When guests wake up and stumble down the wooden staircase, they have to walk past the enameled head of Jesus reflected in a mirror outside the second-floor bathroom. Downstairs, a taxidermied stag butts up against a pool table. 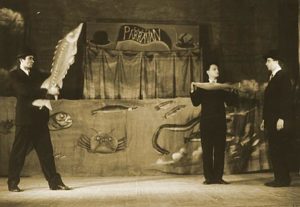 The most famous Polish director-cum-visual artist was Tadeusz Kantor, whose costumes and posters hang in museums, and whose theatrical pieces were works of visual art. Kantor is one of the major ancestors and influences for the work of Teatr “Cinema,” but the other one, perhaps even more important to their theater, is Pina Bausch. “Cinema” has been intentionally borrowing Bausch’s absurdity built through repetition, as well as her playful humor around the frailty of the human body, for years.

Consequently, when “Cinema” received an invitation to create variations on the theme of Bausch, for the tenth annual Ciało/Umysł (body/mind) dance festival in Warsaw, they were able to simply present a collage from their own repertory–a remix of “Cinema”‘s own work related to or inspired by Bausch, or what Szumski has called “sins I am proud of.”[i]

I saw Re // MIX // Pina Bausch two months after its September 22 premiere, at the Łódzkie Spotkania Teatralne (Łódź Theatre Meetings) in December 2011.[ii] The piece was less than an hour in length. Six performers, three women and three men (Małgorzata Walas-Antoniello, Izabela Terek-Jopkiewicz, Monika Strzelczyk, Paweł Adamski, Jan Kochanowski, and Tadeusz Rybicki) were passively assembled in folding chairs along stage left. A medium projection screen hung at upstage right like a painting tacked on the wall. Over the course of the next fifty minutes, actors, props, movement sequences and video clips tumbled onto the stage like toys being dumped out of a toy box.

Some of the movement quotations in RMPB, taken from “Cinema”‘s previous works, were re-enactments from a previous production. In one such sequence, quoted from the company’s 2008 Krótka Historia Kroku Marszowego (A Short History of Marching Steps)[iii] a performer begins to trot across the stage with a hula hoop wedged between her thighs.

Other quotations in RMPB were presented in the form of videos, played on the projection screen while the actors sat and watched with the audience. I’ve never seen theater that translates so well to video as Teatr “Cinema”–or maybe no translation is involved in filming such a visual company. The actors on the screen were present to the audience with the same life as the actors on stage.

One of the most memorable of these videos was the Sacre d‘Été sequence (Rite of Summer). In Sacre d‘Été, three tall shirtless men in tight black shorts, men who are not in dancer-perfect shape (which is to say that all of them have protruding guts), stand in a line and perform a series of steps that resemble fencing, or dancing. They move straight towards the camera, and then back straight away from it, sashaying and marching. Eventually, they begin to incorporate their stomachs into the sequence–bouncing their hands off them, pounding and kneading the round bellies like lumps of rising dough. It’s funny. It’s increasingly uncomfortable to watch. The movement goes on, and on, and on–forcing the audience member to go beyond whatever first response he or she had to the movement and form new associations. Eventually, the belly seems to be detached from the body, like one of Magritte’s floating torsos.

The violence and absurdity of the human body

In a central sequence in Re // MIX // Pina Bausch, three actors sit side by side with plates on their laps, forks in one hands, and fake plastic guns in the other. They shovel imaginary food into their mouths in an artificially synchronized rhythm and try to catch the other actors off guard with the guns. Each time one manages to tap the gun against one of the other’s heads, the little sequence resets itself and they begin eating again. Their movements are staccato and jerky, like wind-up toys. At first viewing, this sequence was light and silly. I kept expecting someone to shout “Bang! You’re dead!” But the emotional content of the sequence became more disturbing as it continued. The longer I watched the guns sneaking around the clicking forks, the more I thought of a family dinner full of recriminations and veiled attacks.

Not all of the humor in Re // MIX // Pina Bausch is looking for profundity. Szumski’s work, like Bausch’s, sees calling attention to the absurdity of the human body as a worthwhile pursuit in and of itself. Elsewhere in RMPB, actors danced around the stage holding heavy green squashes, dropped the squashes on the floor, got squash guts on the floor, and then had to clean them up. At another time, women tucked the bald heads of other actors under both arms (making the bald heads appear to stand in place of their breasts). The heads here, like the bellies in Sacre d’Été, were treated like props detached from the bodies of the actors who possessed them.

One criticism that might be made of Re // MIX // Pina Bausch is that the isolated elements, the sequences of movement on stage and in the videos, did not add up to a coherent artistic narrative–only a collection of samples. However, to search for a narrative would be to misread Szumski’s intent.  Collage is central to the company’s process; they work with an intentional interruption at every level of their work.

Zbigniew Szumski and his process

When I interviewed Szumski in August 2011, he described taking a four-hour break in the middle of the rehearsal day, and taking weeks between periods of rehearsal so he could watch tapes of the actors’ improvisations and pull out the segments which interested him for further refinement. Speaking about their process, he said, ” I ask questions. I try to confuse the actors so they don’t see the questions forming into a logical series and becoming a story that you can put together. What I care more about is having small fragments.”

Since Re // MIX // Pina Bausch is a sampling of work from over twenty years of “Cinema,” it is, in effect, a collage made from twenty years of collage. The work resists any single unifying thematic or visual principle–except, perhaps, for the principle of watching itself, as in the actors watching the videos of their own previous work, or Szumski watching his company. Unlike Kantor, he doesn’t wander the stage with his actors, but his presence is nonetheless part of the company’s work.  When “Cinema” performs, Szumski is inevitably lodged in a corner, usually behind the sound board, observing the stage like a painter staring at his easel.

Dara Weinberg is a writer/director, originally from Los Angeles. She studied Polish theater on a Fulbright grant from 2011-2013; she now lives in Łódź, where she teaches at the University of Łódź’s English Institute and is working on a book about her experiences with Poland, theater, and Teatr Chorea. 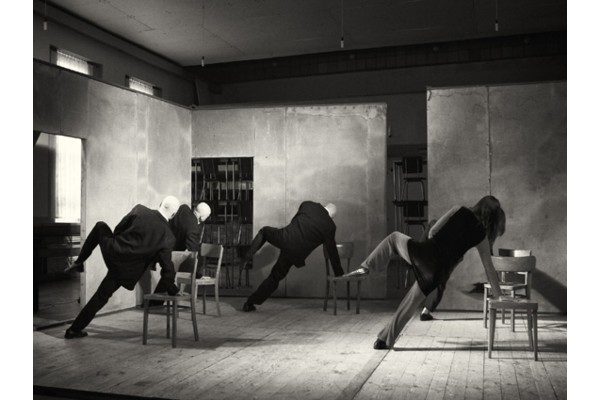 [i] In the program notes for Re // MIX // Pina Bausch, online at the C/U Festival’s website, Szumski is quoted as saying “… I saw Cafe Müller 30 years ago. It is my favourite, together with Bandoneon, Waltzer and Nelken. Tadeusz Kantor and Pina Bausch are my very personal and emotional inspirations. I accept them without any analysis or consideration. When I was working [on Re // MIX // Pina Bausch] I chose these parts of my performances, in which I found fascination for Pina Bausch. This is my confession of sins I am proud of.”

[ii] Since “Cinema” lives and works so remotely, and has no theater of its own, its pieces are only presented outside of Michałowice when the company is invited by festivals. The showing of Re // MIX // Pina Bausch I saw on December 2nd was only the third time the piece had ever been publicly presented.

[iii] Excerpts from the hula-hoop sequences of Krótka Historia Kroku Marszowego can be viewed on YouTube by typing in “Teatr Cinema” and “A Short History of Marching Steps.”