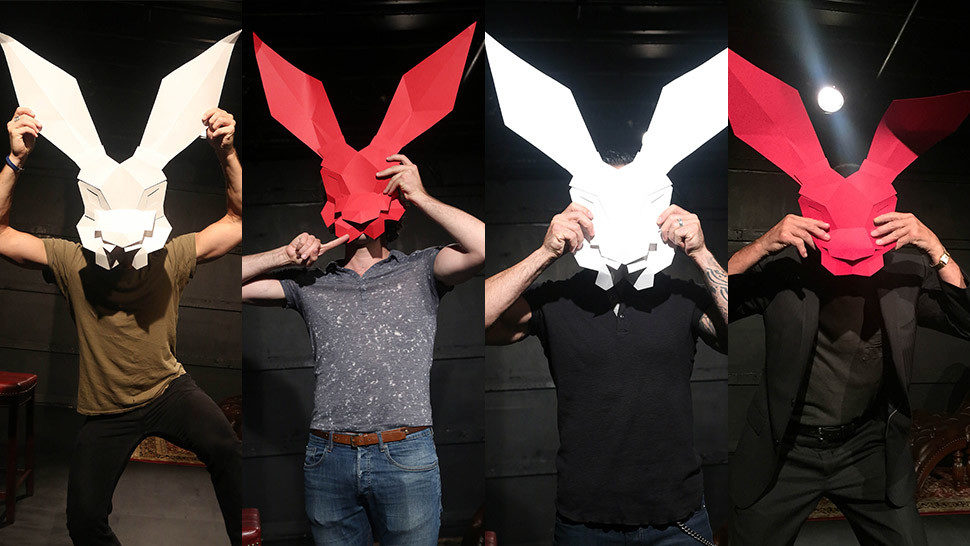 Seven years ago, a new play challenged the role of the actor, the playwright, the audience, and the capacity of one individual to travel. The play was White Rabbit Red Rabbit, written by the mysterious Nassim Soleimanpour, an Iranian writer who encouraged the audience to email him with impressions about his play. Because of the situation in Iran–Soleimanpour explained in White Rabbit Red Rabbit—he could not travel, but he hoped his play would allow him to do so. However, this feature was not what made the play unusual. The most salient aspect was that he had a different actor every night because the actor-performer could not have read the play beforehand.

The play, safely hidden in a manila envelope, was given to the actor at the beginning of the play. There was no need for rehearsal, for a director, or for a stage design. In that way, actor and audience were in the same situation of uncertainty. They were all bonded by the experience and thus theatre became a relationship between some pieces of paper, a person reading them, and the people watching the reading. But they were not alone.

Soleimanpour’s words powerfully recreated his presence on stage. It is one thing to know that Tennessee Williams’ plays are somewhat autobiographical, and therefore to feel the connection between the fiction and the real. But Soleimanpour was an unseen force, a puppet master present in that room.

White Rabbit Red Rabbit was an exploration of the power on an individual to dictate what other can do. The enigmatic presence of the playwright commanded the actor and the audience to perform different actions. No other source of power was present: only the words in the manila envelope. And yet, people obeyed. They obeyed against their instincts, against their moral compass, against their logic. Soleimanpour’s voice as a playwright was somewhat sinister: a charming, empathic stranger with a desire to travel, who somehow could recreate the blind power of a dictatorship.

Nassim’s play became widely successful. His words took the timbre of famous actors. With almost God-like ubiquity, he was both in New York, Berlin, London, Iran and many other countries. He physical also left Iran as he had always dreamed to do. He saw his own play being performed, a wish that was expressed in the play. White Rabbit Red Rabbit a strange play kept in a manila envelop changed Nassim’s life.

Soleimanpour moved to Berlin to keep writing. But the form he had created was not a one-time phenomenon. The cryptic manila envelopes evolved to tell other tales. After receiving thousands of emails from people who had seen White Rabbit Red Rabbit, Soleimanpour used the form he had created to discover even more stories. In BLANK, the story they told was that of a member of the audience called “the character.” This time, however, the playwright is not a powerful dictator but offers the rest audience the power to create that story. All the traditional roles become blended. Who is the actor? The person reading the script or “the character?” Who is the playwright? The person who wrote the sheets of paper? The “character?” The audience? What is the play, if it changes with every performance, depending on the team?

White Rabbit Red Rabbit explored how people will blindly follow rules. BLANK, a journey through life and death and community, represented a radical change in tone in Soleimanpour’s thematic. Instead of an intellectual awakening, it was a rebirth. Nassim was evolving.

This past Fringe, Aurora Nova and Traverse presented Soleimanpour’s last play: Nassim. Continuing with his aesthetics, there was mysterious play and a nervous actor. As the actor started reading, the well-known simple, witty, wise, sarcastic, warm voice of Soleimanpour started to come through. He was back to make the audience complicit of something personal. This was the playwright’s story of how his dream of travelling came true just to reveal to him he was a foreigner. And how even, when returning home, he felt like a foreigner. How he wanted his mother, still in Iran, only speaking Farsi to understand what his eyes had seen. It was his story, read in English by an unknown actor, while feeling the silence of the playwright’s physical presence–the same way that all his stories had been told. However, this time, Nassim was there.

For those who had once felt they knew the playwright through his words, witnessing him on a stage was a meaningful event alone. He was still quiet, but his eyes had the same spark and wit that his words had shined with. Through a projector, aspects of the play, similar to what had happened in BLANK were being originated live for the audience. And again, this created a sense of community in the audience, this time with silent Nassim present in the room. He broke the cultural barriers that set him as a foreigner: told us how to tell nighttime tales in Farsi, how to say “mom.” By the time we heard his voice—this time his own timbre and warmth—we knew exactly what he meant with his foreign words.

What started as an intelligent, yet artificial, way for a playwright to travel and recreate the process of a disembodied order of command, has evolved to be a powerful theatrical form to activate our sense of community. The same way that Nassim breaks theatre role conventions, he finds ways to break cultural separations. It only takes a mysterious manila envelope for the magic to happen.

The scripts for White Rabbit Red Rabbit and BLANK can now be purchased.