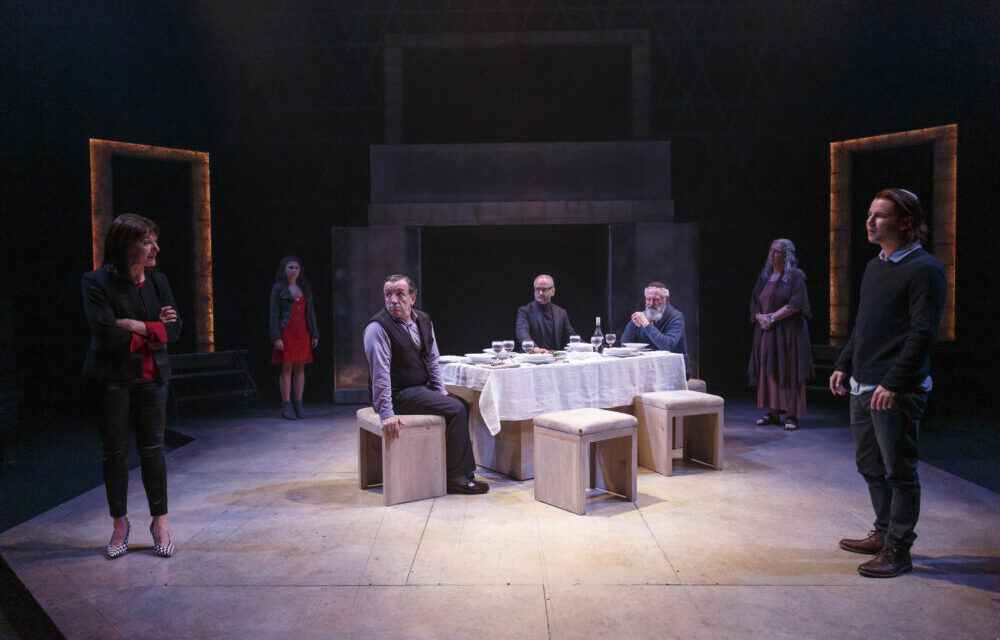 Members of the company in "Birds of a Kind." Photography by David Hou.

“Is it really important to cling to our lost identities? What is a life lived between two worlds? What is a migrant? A refugee? A mutant?”

There is an important backstory to the Stratford Festival’s brilliant and timely production of Lebanese-Canadian Wadji Mouawad’s Birds of a Kind, which brings a remarkable initiative between the playwright and director full circle. It was Antoni Cimolino, Artistic Director of the Stratford Festival, and the director of Birds of a Kind, who first introduced a pivotal character in the play’s central themes to Mouawad, over a dozen years ago with the hope that a play could come out of it. After a winding history and ahugely successful production in Paris, the complex drama which grew of that gift of sorts now comes home to one of its creative points of origin.

That character is Leo Africanus, the nom de plume of a converted Christian who was originally a Muslim diplomat, scholar and intellectual, name al-Hasan ibn Muhammad al-Wazzan. In the dramatic story, as told by historian Natalie Zemon-Davis, Al-Hasan was improbably captured by Christian pirates on the high seas and introduced to the famed Renaissance Pope Leo X, who took him under his wing. After his conversion, and his reinvention as Leo Africanus, the gifted scholar flourished as a renowned historian of the African continent, only to disappear from view at the end of his life, with rumours (and Zemon-Davis’s groundbreaking biography is deliberately speculative) including having retreated to his former Muslim identity, after a life lived in the cracks and fissures of identity.

The play opens with the chance confrontation between Eitan, a young German-Jewish geneticist and Wahida, a Moroccan Muslim graduate student in a Columbia University library, a moment of love at first sight when the universe splits open, the first of many “shatterings” central to the play (visually captured by designer Francesca Callow in a mood-setting opening scene in which a single Moroccan light throws complex tile patterns on the floor).

In the course of the play, al-Wazzan who is the subject of her dissertation embodies Wahida’s own search for belonging as an Arab, and identity she had formerly disavowed. Her personal journey is mirrored by the questions of memory and identity that drive the whole actions of Birds of a Kind, played out as a story of family secrets against the ongoing tragedy of the Israeli-Palestinian conflict.

The reciprocal relationship between the domestic drama and the war between these two Middle Eastern antagonists is echoed in the visual staging of the play, in which a cacophony of the languages spoken by characters (Arabic, Hebrew, and German) is translated onto an overhead screen. How does one “translate” one person’s story into another’s, one people’s history into that of their enemy? Mouawad raises the ante on these to overlapping questions by framing it within a framework of trauma, which is central to the deeper understanding of what is at stake. both in the characters and in his reading of the Israeli-Palestinian agon. In the end, this is a play about mutually wounded histories, which bite deeply into the hard shell of identity, both personal and national.

The play is structured in short scenes with abrupt shifts in place and time which allow for registers as different as on-the-spot journalistic reportage of violent events and flashbacks which belong to the inner life of characters, where the past is never really the past.  This is the cinematic language pioneered by directors such as Alain Resnais in France, where personal traumas are inextricably bound up with national traumas. As early as the second scene in the play, we confront the massacre of Allenby Bridge in which Eitan is separated from Wahida on the way to Jordan, and taken to the hospital, seriously wounded.

Mouawad has chosen the event with historical specificity: it is the first use of suicide bombers in the Palestinian resistance. In the same way, a critical scene of confrontation between Eitan’s grandparents, Leah (Deb Filler) and Etgar (Harry Nelken) takes place against the Christian Phalange massacre in the Palestinian  camps of Sabra and Shatila, their own guilt set against the national crisis posed in Israel by the moral shock of the event.

Mouawad’s play is resolutely contemporary in its fluid time-space frameworks, its preoccupation with questions of identity and memory, and the demands the multiple languages of his trans-national characters make of new technologies in staging, yet there is also a sense in which this is a play of character, argument, and idea in the realist tradition of Ibsen. The Wild Duck’s theme of the “life-lie” could almost be a map for the central debates around truth and lies in Birds of a Kind, particularly those lies that prop up and secure the very core of identity.

The epigraph that Mouawad supplies for the play is from Sophocles’ Antigone, a drama that centers around the necessity of due mourning, the burial of the dead. But, before the dead can be interred, their truth must first be made known. What distinguishes the character of Birds of a Kind from each other is their take on how much truth is necessary, how much truth is supportable, and what needs to stay buried in order to avoid the shattering of identity altogether.

Even Eitan, who believes that all of character and emotion can be summed up in 26 chromosomes (“All of Auschwitz did not affect a single gene”) finds himself on a quest for the truth that will upend the lives of his whole family. Wahida encourages this outing of the truth of Eitan’s family, just as she insists on confronting the suppressed truth of her own identity after returning from the Arab village which is divided by a wall from her Jewish lover Eitan’s family. Finally, Eitan’s grandparents face each other across an unbridgeable divide, at odds whether to acknowledge a long-buried truth, which, in their case, is also a crime.

The figure who most fully argues for the necessity of the life-lie that will protect the carapace of identity is Eitan’s mother, Nora, a psychiatrist in Germany who has her own wounded history. As a professional in the art of the slow progress of unhiding the truth, she passionately defends her belief that there is a right time for lies and a wrong time for truth.

It is her husband David, who is “shattered” in the end in a remarkable performance by Alon Nashman that, at a climactic moment, captured the psychic disintegration of the character at a bodily level (his solo performance as director John Hirsch both a prelude and a practice for this performance). But, all the actors are quite wonderful in Birds of a Kind, playing off each other dynamically.

Sarah Orenstein delivers a Nora who is simultaneously sensitive and strong and she moves with dynamic energy across the stage so that her dialogue is never merely just talk.

Etgar stages the Holocaust survivor who can taste only ashes, while Leah manages to capture the abrupt character transitions that belong to a woman whose love for her son is masked by a show on heartlessness. As Eitan, Jakob Ehman, conveys all the energy and enthusiasm of a young man whose resilience will be tested in both love and family war. Finally, in the pivotal role of Wahida, Baraka Rahmani gives a passionate and mature performance, her perilous journey of identity utterly convincing.

The intimate environment of the Festival Studio theatre is the right place to stage an encounter of the sort that Birds of a Kind enacts. Director Cimolino’s long-ago gift to Mouawad has traveled in a relay from director to playwright and back to the audience. In the end, it’s an electric transmission that does honor Mouawad’s layered and empathic play.

This article was reposted with permission from capitalcriticscircle.com. It was originally published on September 13th, 2019. 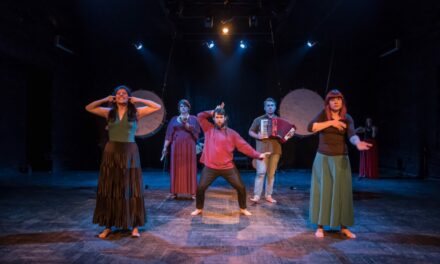