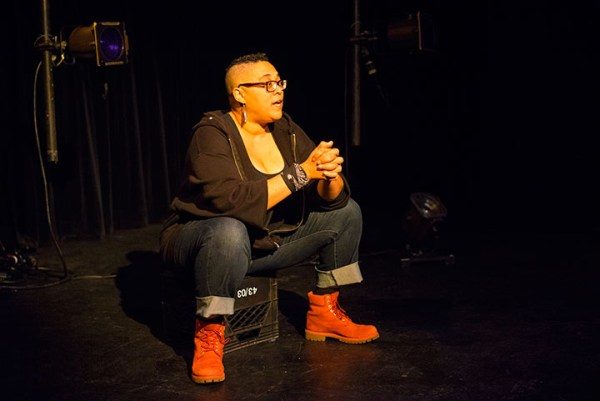 Donna-Michelle St. Bernard in "Sound Of The Beast". Photo by Henry St. Fleur.

A spotlight shines on a black hoodie lying on the floor. Donna-Michelle St. Bernard slowly walks to the center of the light, picks the hoodie up off the ground, and shrugs it on. A beat begins to play and she begins to rap: “My jeans say fuck you, my hood says fuck you, fuck you…” As the music fades, St. Bernard begins to talk to the audience. “Have you ever been slow-cruised?” she asks. She describes the disturbing sensation of being watched by the police and having them crawl up beside her in their squad cars. At one point during this monologue, all the lights drop except for a bright strip at the front of the stage facing St. Bernard. It looks as though she’s staring down a pair of headlights and she blinks uncomfortably as she continues to describe the paranoia and terror that comes with being censored and scrutinized by the cops. Her expletive-filled first song begins to make sense. 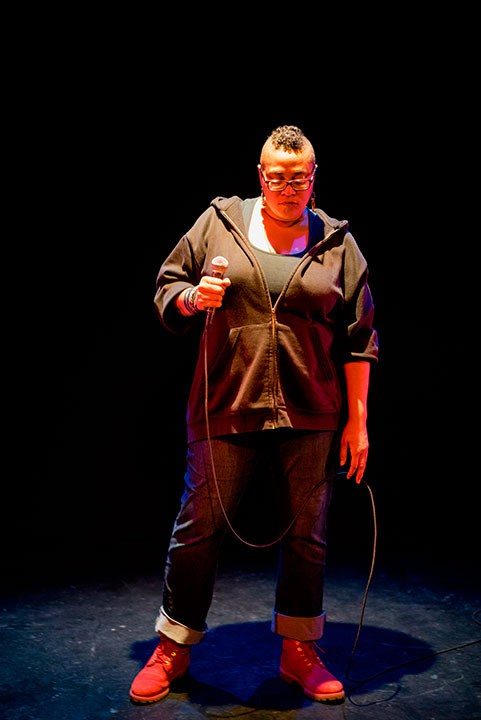 Donna-Michelle St. Bernard in Sound Of The Beast. Photo by Henry St. Fleur.

Sound Of The Beast (SOTB) is an autobiographical solo performance, written and performed by St. Bernard and directed by Andy McKim and Jivesh Parasram. It weaves together St. Bernard’s identity as an emcee, performer, and activist and is part of her larger project 54ology. Named after the Nation States of Africa, 54ology is an artistic response to current and historical events in these countries. In SOTB, St. Bernard tells the story of a young Tunisian rapper named Weld El 15. After his song Boulicia Kleb (which translates to Cops Are Dogs) came out in 2013, Weld El 15 was imprisoned. St. Bernard connects Weld El 15’s story to her own as she shares stories from her own life as an activist and hip-hop artist based in Toronto who raps about police brutality.

“It’s really important to me that we in Canada who are used to thinking of ourselves as polite and nice and, like, morally superior to lots of other countries understand that censorship can look different,” says St. Bernard in an interview after the performance.

St. Bernard weaves her own music between monologues in the performance, breaking into rap both with and without an accompanying beat. The songs range from rallying cries against police violence to calls for compassion, and descriptions of grief and anger.

“I get quite emotional in the songs,” says St. Bernard. “When I get to a point where the songs aren’t emotional for me I stop doing them because it feels like I am not telling the truth anymore.”

I ask St. Bernard what motivated her to create this deeply personal and demanding solo performance:

“As much as I want to bring another voice to the theatre, it’s not just about Black experience or people of colour,” she says. “It’s about form and class—class even more so than culture—I want to elevate stories that are not being told, that are not considered worthy of ink or airtime.”

A major theme of SOTB is the way people of color are censored, targeted, and silenced by the police and other institutions.

“It’s not just the cops. It’s a systemic issue,” adds St. Bernard. “When you look at people like Tina Fontaine and Colton Boushie and just generally how Indigenous people are policed, you really understand who are the disposable people here in Canada. It is Black people – but maybe even more so Indigenous people.”

Though much of the content in Sound of the Beast is sad, even tragic, this is not a performance of defeat. St. Bernard’s story is empowering, educating, and important.

This article was originally published in Alt. Theatre on October 23, 2018, and has been reposted with permission. 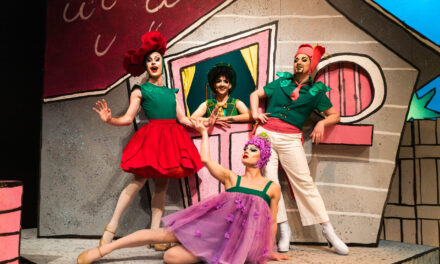