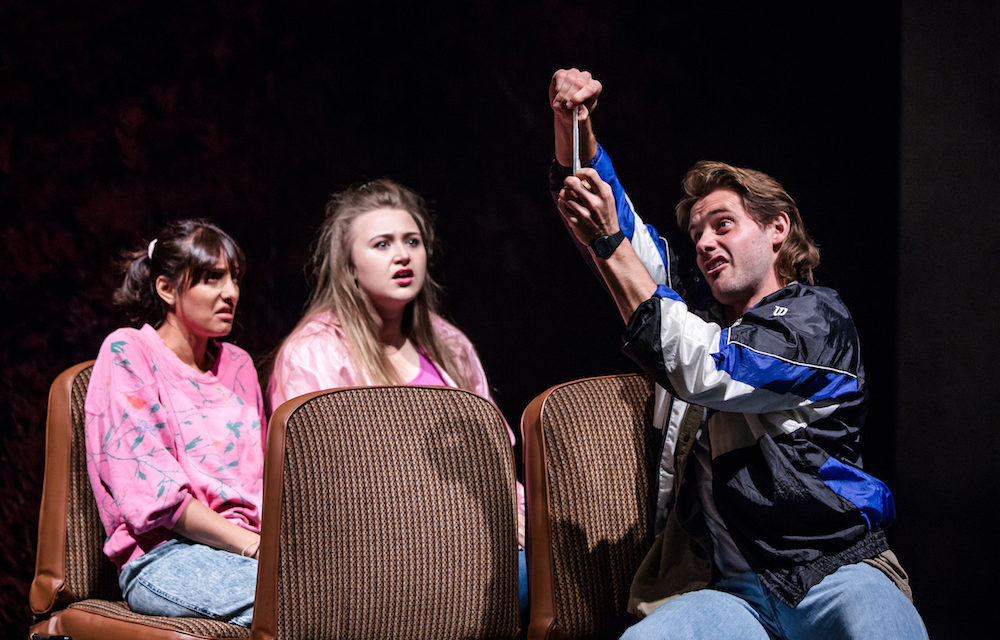 Taj Atwal, Gemma Dobson, and James Atherton in "Rita, Sue and Bob Too." Photo: The Other Richard

Vicky Featherstone, the artistic director of this new writing venue, is riding high. Very high. A couple of weeks ago, she was voted the most influential person in British theatre by The Stage, the industry newspaper which annually compiles a top 100 list. Number one! This is not only because of her programming—which has included Jez Butterworth’s The Ferryman—but also her activism. She is one of the most prominent voices to speak out against sexual harassment and the abuse of power in the theatre industry. Her support of the #MeToo campaign and organization of the No Grey Area event at the Court in October last year resulted in new guidelines to tackle sexual misconduct. And the event helped Kate Maltby, critic, and journalist, to speak out against Tory minister Damien Green.

On the programming front, Featherstone’s policy of including Royal Court classics, thrillingly realized in John Tiffany’s revival of Jim Cartwright’s Road last year, is once again vindicated by her restaging, in a co-production with Bolton Octagon and Out of Joint, of Andrea Dunbar’s 1982 debut Rita, Sue And Bob Too (originally put on at the Court with Max Stafford-Clark as director). But the process of bringing this modern classic to London has not been easy. Its co-director was again Stafford-Clark, and the play was canceled after, last year, he was forced to step down from his leadership of Out of Joint following several complaints about his sexually suggestive remarks to women. Bravely and thankfully, Featherstone has reversed this decision and Dunbar at least is not the latest victim of male predation.

But that doesn’t mean that all is rosy in the lives of the young women in her play, Rita, Sue and Bob Too. Set on a Bradford council estate, Rita and Sue are two 15-year-old babysitters who have sex with the married 27-year-old builder, Bob, who complains that his wife, Michelle, is sexually unresponsive. The opening scene, which in Kate Wasserberg’s excellent revival is played with the house lights on, shows Bob having sex with the two underage teens in his car. While the girls are full of bravado, they are also ignorant: he shows them how to put on a condom, and then they take turns to do the business. But although he thinks they are virgins, they are more experienced than they let on. It’s typical of Dunbar’s writing that the scene is not only excruciatingly explicit but also that the females know more than the men realize.

Sharply observed and full of teenage boasting, the play is also an indictment of ignorance and poverty. In this version, which has been edited by John Hollingsworth and Stafford-Clark, Dunbar’s down-to-earth view of sex, crude but with a sharp tang of young wisdom (she was 19 when she wrote it) is much less appalling than the picture the play paints of Sue’s family life, with her mother and her violent drunk of a father swearing at each other. In Sue’s view, her Dad is “a bit of a cunt.” By contrast, Bob comes across as much more complex, with the scene about erectile dysfunction showing a more human side to this incurable philanderer. Despite his capacity for aggression, there are also some small instances of tenderness.

With a mix of despair and hilarity, Dunbar gives us a ten-scene tour around her homeland, the impoverished Britain of the Thatcher years. As a guide, she’s full of salty folk wisdom and straight talk: the only moments that strike a false note are brief passages about social issues (Thatcherism; unemployment) that seem to be directed more towards a middle-class audience than the more larky moments. The main theme is teen female friendship, which is by turns jokey, embracing solidarity and accepting competition over men, and occasionally vicious. Dunbar gives an invigoratingly clear picture of how women and girls behave towards each other. And one which doesn’t shirk their cruelty.

Although the 1987 film version—directed by Alan Clarke—ends on a bawdy high note, Dunbar’s play is much more realistic and leaves you with both an appreciation of the playwright’s insights and a sense of sadness. In a vivid reminder of the childishness of the girls, they wear white bobby socks; at the end, the discarded women meet in the pub and drown their sorrows, concluding that “all men are no good—they want shooting for all the trouble they cause.” While the low self-esteem of the women is a constant, there are moments of freedom and touches of humanity, and above all humor, that raise the spirits.

Politically, this semi-autobiographical story has a wider resonance: in the past poor working-class communities could protect their young women with a strict moral code based on religion. And by stable families. By the 1980s, the decline of deference and a combination of increasing secularization and the ideology of individual freedom and market forces meant that 1960s sexual liberation resulted in more exploitation of vulnerable women. Dunbar, who died aged 29 from a brain tumor, understood this instinctively. Her women are feisty survivors; her men are selfish exploiters.

Wasserberg’s superb production has nuanced and detailed performances from each of the cast members, and her orchestration of the emotional cross-currents in, most notably, the sandwich-eating scene is excellent. Television’s James Atherton is on fine form as the rascally and amoral Bob, and Gemma Dobson (Sue), Samantha Robinson (Michelle), Sally Bankes (Mum), and David Walker (Dad) are all convincing. Casting Taj Atwal as Rita gives a racial tinge to the character’s final downfall. Tim Shortall’s bare set allows scenes to flow into each other so the show’s 80 minutes rush by. His background is a huge photograph of the Bolton skyline, which glows with lit windows in the night-time and whose green hills and blue sky suggests a glimpse of freedom that the characters so rarely enjoy. It’s great to hear Northern accents again in London and the 1980s soundtrack, nicely enhanced by Emma Laxton, is a joy. An unadulterated triumph.

This article originally appeared in Aleks Sierz on January 16, 2018, and has been reposted with permission.