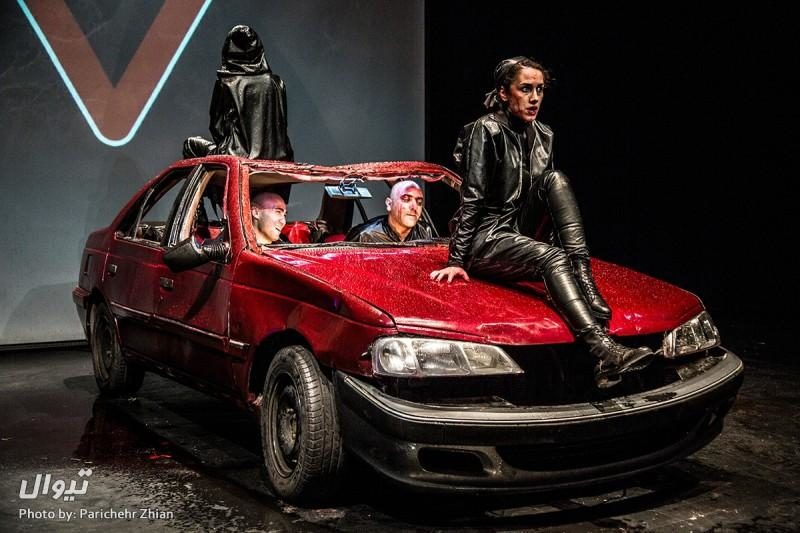 The first thing drawing my attention before I watched the play was its title. Mischief reminded me of playfulness, little mischievous acts, and a light comic atmosphere. In addition, based on the information I had gathered, the play was about Tehran night parties. With such a preconception, I sat to watch the performance. But to my surprise, what I saw in eighty-five minutes was a bloody inferno fraught with rage, violence, and destruction; a dystopia in which human values were reversed, money talked, and honesty and friendship were sacrificed.

Mischief, by Mehdi Kooshki, is a firmly constructed play which reveals the absurd and messy life of a particular group of hooligans in Tehran. The play illustrates a slice of life of Mehrdād and Shahrām, two friends struggling to survive in a network of corrupt relationships. They hang out at special night parties, and both earn a living through connecting themselves to the delinquent nouveau riche who drive their Ferraris. Shahrām is a dancer and Mehrdād is probably a drug dealer. The main line of the story is Mehrdād’s plan of seeking revenge against Javād for having broken Shahrām’s leg in a fight. Throughout the play, the two friends drive a broken-down Peugeot with a half-removed roof that represents their unsafe and ugly world. Ultimately, Mehrdād finds Javād and murders him inadvertently. From this point on, the two young men’s escaping from the police and Javād’s vengeful friends constitute the backbone of the rest of the play.

Mehrdād and Shahrām’s conversations with each other and on the phone with people who call them nonstop establish a hooligan discourse through which their dishonest and temporary relationships and anxiety-ridden lives are pictured. The car which Mehrdād and Shahrām are apparently driving to reach certain destinations does not take them anywhere. What the audience understands out of all their talks and actions is an absurd, fruitless struggle and a meaningless lifestyle in which love has no place and friendships are formed and destroyed based on self-advantage.

All characters in the play are anti-heroes. Mehrdād, the protagonist, has inflexible moral values. His friendship biases which drive him to commit murder do not arouse sympathy in the audience. He treats Donya, his girlfriend, in a contemptuous and inhumane way. In the end, when he discovers Shahrām and Donya’s betrayal, he sets Shahrām on fire and stabs Donya. It’s as if he is a machine programmed for revenge. In contrast to Mehrdād, Shahrām is an unscrupulous young man who only thinks about himself and does not understand Mehrdād’s attempts for revenge. Donya, Mehrdād’s girlfriend, whom Mehrdād expects to be the epitome of virtue, dances at the night parties organized for the purposes of smuggling young women to Dubai. Nasim, whom Shahrām calls the most desired girl, has multiple relationships through which she gains financial profit. Javād’s friends torture and kill Mehrdād’s father to avenge Javād’s murder. The physician whom Mehrdād calls for help to get advice about his disease does not help him. In one word, the world depicted in the play is a slaughterhouse where human values are sacrificed. This sacrificing is presented by blood. The blood dripping from under the car’s hood–the car which is a metaphor for Mehrdād and Shahrām’s world–and sprinkling on the characters’ faces at the end of the play, and the blood which Mehrdād throws up now and then, is a metaphor for their system of thought and morality, which finally annihilates them. Killing Shahrām at the end makes Mehrdād’s journey on the streets of the city a vicious cycle, a journey which was supposed to prove his friendship. In other words, the broken-down Peugeot or their baseless moral values have taken them nowhere. 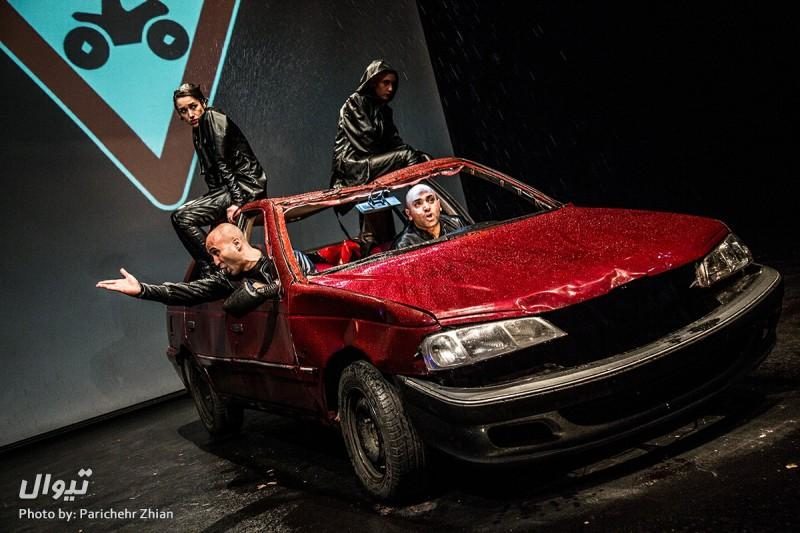 All in all, Mischief pictures its desired dystopia with dexterity, carefulness, and creativity. One of its noticeable innovations is an effective use of a minimal and symbolic set. The two characters travel all along the play in a Peugeot, and the audience should visualize different places and actions. All actions happen inside the car or in the space beside it. Another interesting aspect of the stage design is a “Watch out” sign projected on the backstage wall, on which a variety of signs appear simultaneous with the dialogue and actions. These signs remind us of plastic relationships between characters who connect to each other through cell phones and social media. The next technical innovation is the employing of two female characters who sit on the car roof throughout the play. One of them is a rapper whose role reminds one of the Chorus in Ancient Greek tragedies. She sings rap songs at intervals that explain and interpret the world of the play. The other actress’s role shifts between the voice of Mehrdād’s girlfriend, French singers’ played on the car’s sound system, and the announcer of the names of people calling Mehrdād and Shahrām. Using these two women gives a different color to the stressful and violent atmosphere and sometimes creates a funny and entertaining effect. Donya’s dialogue, which is mostly in French, implies Mehrdād’s wounded unconscious that carries the memory of her lost mother. She abandoned him when he was a little kid to go to France and become a singer. However, there is no convincing justification for the use of so many French songs in the context in which they’re acting except that they magnify the contrast between the graceful cultural world the songs signify and the coarse hooligan discourse in the car. In the end, the actors’ powerful acting, especially that of Mehdi Kooshki, makes the rough course of the play smooth for the audience.

Mischief was staged at the Independent Theater Hall Venue in Tehran in June and July 2018.