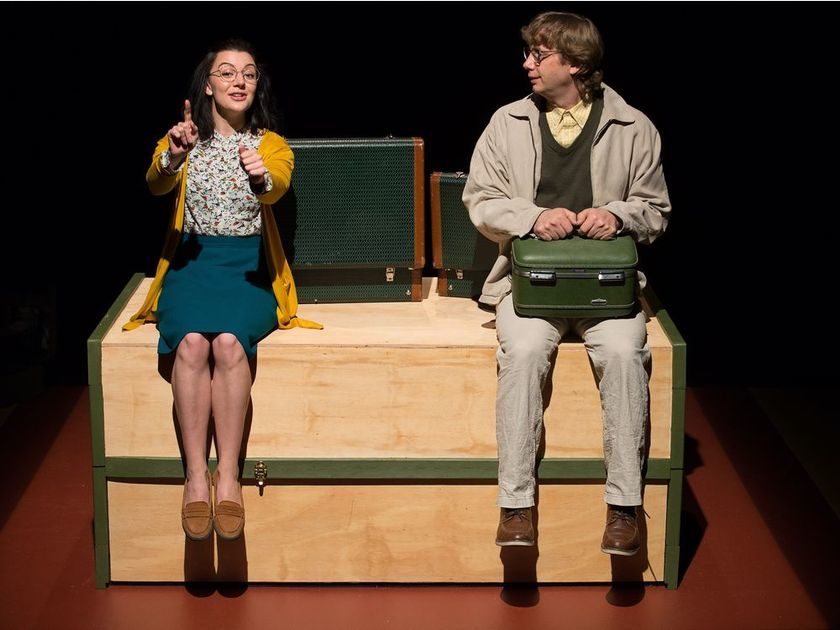 Back in another era, dramatist Harold Pinter used to contend that his often enigmatic plays were really about the breakdown of communications between human beings.

But that was well before the dawning of a new electronic age, before the advent of smartphones and digital cameras, Twitter and Facebook.

A play like Phil Porter’s Blink wouldn’t have been conceivable a couple of decades ago. Its vision of the way people choose to communicate would have seemed the stuff of science fiction. Yet the piece now on view in an excellent production at the Gladstone is scarcely a celebration of the social media and the way in which it brings people closer together. As it reaches its gentle close, it reveals a sad and rueful twist in its tail.

It is essentially a love story about two introverts, Jonah and Sophie, whose relationship can flower only at an electronic distance. “Love is whatever you feel it to be,” we’re told at one point, and these same words embellish the front of the printed program. Because of their childhoods, Jonah and Sophie are both damaged goods before they launch their strange relationship, and one of the merits of the tactful performances of David Whiteley and Gabriella Gadsby is the way in which they quietly convey how bruised and vulnerable their characters continue to be in an adult world.

The central situation is unusual and out of it, award-winning British playwright Phil Porter takes his story on a tantalizing psychological course. Part of the fascination for the playgoer will have to do with what is actually happening as this 75-minute piece proceeds. So let us cautiously say that Sophie and Jonah live in close proximity to each other yet develop their relationship by staying apart. They share their lives through video monitors that enable them to nurture a relationship whose strength depends on their apartness. Yet, if modern technology allows them to watch television together and share mealtimes together, if they are able to find comfort in being able to watch each other’s private behavior by electronic means, what keeps them from going one step further and actually getting together?

But maybe we’re dreaming an impossible dream here. Real human contact can exact too terrible a price from these two. When Jonah timidly envisages the possibility of something more, he’s denying the necessity of two psychological solitudes, his and hers, and blindly approaches that tissue-thin moment when he becomes something of a stalker.

Each performance is richly detailed in this production, directed with care and sympathy by Teri Loretto-Valentik. Whiteley gives us a Jonah who is painfully shy, scarred by a rigidly religious upbringing and conscious of his lack of social skills. Gabriella Gadsby a newcomer to Ottawa theatre, is excellent in conveying Sophie’s more complicated psychology. She may seem better equipped to survive the world she lives in. She is sufficiently savvy about the digital revolution that she’s the one who initiates contact with the technically illiterate Jonah. But she can’t really function in a normal workplace or, for that matter, in the culture that envelops her. She yearns for a fulfilling relationship, as does Jonah, but for them, only an artificial environment can provide them with the protection they need to make it work.

There are times, however, when the performances are almost too muted. This was particularly true the other night with the opening monologues. Exposition is a vital factor in the play’s quiet impact, and if audience members further back can’t hear, that’s a problem.

For all the technical hoopla on display—the video cameras, elevated screens, electronic tablets—it’s the emotional texture of Blink, with its examination of hope and loss, that asserts itself in this contemplative production. What we have here is a wistful parable about the modern world. And it resonates.

Blink continues at the Gladstone to April 14.

Set and costumes: The Company

This article originally appeared in Capital Critics’ Circle on April 6, 2018, and has been reposted with permission.