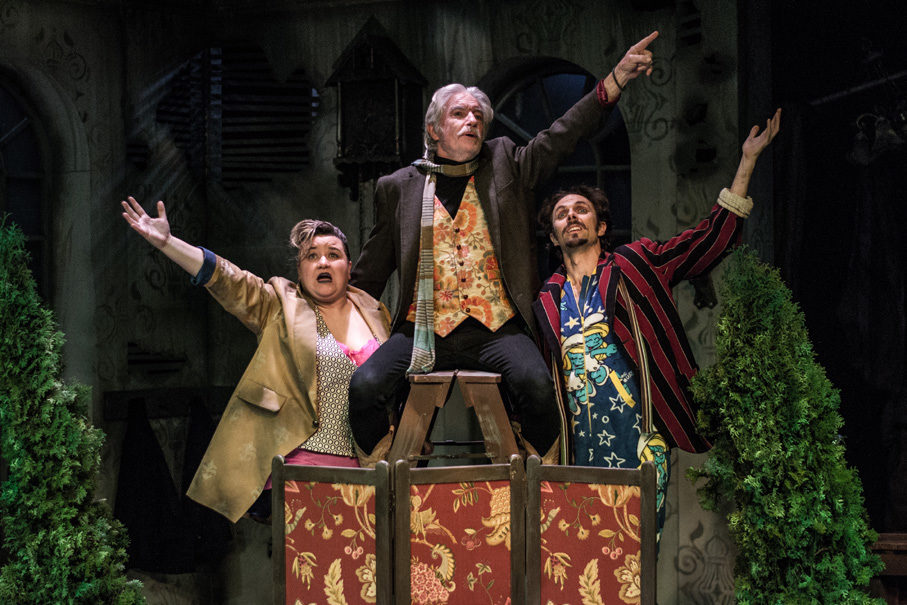 Yoicks and tally-ho, what a fabulous, breathtaking ride! The initial fun of this exuberantly, almost ludicrously joyful production is that you feel as if you have arrived at the tail end of a fantastic party: everything topsy-turvy, room a mess, bottles emptied, chaps sleeping it off minus their trousers; but your disappointment is quickly alleviated because the partygoers are so pleased to see you, they wake up, get a second wind, and go for broke.

Which makes sense, when you think about it because Twelfth Night marked the end of the long Mid-Winter Christmas party of drinking, feasting, and mad fooling around under the crazy sceptre of the chosen Lord of Misrule. Benjamin Henson, with his extraordinary imagination and reckless disregard for the conventions, or anything much else, seems just the sort of jester who would have been chosen for the job in Shakespeare’s day, and hence is an inspired choice for Director.

The amazing deconstructed set by local genius Peter King cleverly makes the stage appear vast: a ruined ballroom with huge arched windows, crumbling walls, wrecked wooden floor, and the odd ladder or shabby armchair. At stage right is a barren rope-hung cell that might double as a prison for a madman, or love-nest for a pirate; at stage left a piano with dapper white-jacketed musician (talented Musical Director Liam Donnelly) tickling the ivories in seductive nightclub style.

With dreamy lighting by Ariana Robertson and Martyn Roberts, peopled by bizarre characters in Maryanne Wright Smyth’s gorgeously eclectic mix of costumes, the set is surprisingly beautiful despite the decay, perhaps inspired by Dunedin’s ruined Cargill’s Castle, all smouldering glamour on its dangerous cliff top, and quite likely a romantic venue for the odd illicit party over the years.

We are welcomed in by the cast: an astonishingly successful mixture of professionals with students from the University of Otago, raucously lounging around the theatre. Immersive theatre, for sure, even more than Shakespeare’s thrust stage would have allowed, with actors roaming the auditorium, sliding down the bannisters and coaxing the patrons to sing along with them or fan over-heated brows.*

I am delighted and terrified to be told I look pretty in my festive red dress by the inimitable Bryony Skillington, a comic mezzo-soprano from Manchester. In a great piece of casting, she is Feste the Fool, brilliant if cruel manipulator and natural instigator of Misrule, and despite cleavage and bright pink underwear, surely tough enough to make Top Dog in Wentworth Prison.

Skillington grabs a mic and launches into ‘I’m So in Love with You’ while the performers cheerfully abuse each other and us, and Jonathon Hendry, part-way into role as Olivia’s killjoy Steward Malvolio, attempts a dignified introduction to the Bard of the Avon. He is jeered off and we are immediately plunged into a noisily thrilling shipwreck (borrowed from the opening scene of The Tempest) in which we see twins Viola and Sebastian swept apart, well and truly drenched from the buckets of water hurled by the cast who create a storm that puts King Lear’s to shame.

Some traditionalists might welcome a little peace and some of that music that feeds love after all this turbulence, but it is not to be. Duke Orsino, usually acted with laid-back lovesick languor, gloomily observed by his long-suffering courtiers, is played with quite extraordinary vigour, booming voice, and no trousers at all by Joshua Cramond.

Viola complicates this situation by disguising herself as a boy called Cesario so she can safely work for Orsino, then naturally falls for the Duke but is sent to woo Olivia on his behalf, whereupon imperious Olivia forgets her vows and tumbles into love with ‘Cesario’. Viola, played by Frith Horan with engaging frankness and poise (rather assertively for a heroine who is essentially a gentle soul, no Rosalind or Portia), cannot find her way out of this dilemma and might have to remain a woman trapped in a man’s body forever – unless, perchance, her identical brother Sebastian should not be drowned after all?

The exquisite sexual fluidity/gender-bending of Twelfth Night is embraced by director and cast, and many subtle layers of meaning are mined. It is essential, of course, that an attraction is seen between lordly Orsino and the good-looking Cesario, if we are to believe in the happy ending, and Cramond and Horan manage this beautifully with the careful timing of their longing looks.

One of the welcome quieter moments involves the touching relationship between Sebastian (a very capable Kate Johnstone) and his pirate rescuer and lover, Antonio (played so movingly by Orion Carey-Clark that the audience is sighing over him!). My personal favourite is the surprise happy ending for two characters who are usually left ‘lone and lorn’ – watch for it!

Meanwhile, the subplot is on a collision-course with all this heady romance. Malvolio, Olivia’s uptight puritanical Steward, with lusciously pompous voice, beady eyes and hideous comb-over (ah, the hair-net!), harbours fantasies of marrying her. He makes enemies of her fool Feste, smart maid Maria, freeloading uncle Sir Toby Belch, and Toby’s gull, Sir Andrew Aguecheek, by reprimanding them for their drunken caterwauling and revelry by night. Maria plots to forge a letter to make Malvolio believe Olivia secretly loves him and yearns for him to appear smiling in cross-gartered yellow stockings.

It is the perfect revenge as Malvolio consequently makes a right idiot of himself in a sparkling scene that Jonathon Hendry revels in, rolling on Olivia’s rug like an ecstatic puppy, despite the fact that Benson, never one for moderation, has cross-gartered Malvolio’s crotch instead of his stockings. What follows is crueller still, and Hendry inspires sincere pity for Malvolio, when despite all this sanctioned lunacy we are permitted a glimpse into how an actual lunatic would have been treated.  Ruthless perhaps, but the Puritans’ attitude to the theatre and all merrymaking constituted a real threat: not so many years after Shakespeare’s death the Puritans under Cromwell would tear down his theatres and ban his plays.

The conspirators are marvellously entertaining, especially in the famous letter-reading scene, with their fantastically inventive freezing as statues or topiary so Malvolio won’t spot them (yes, requires suspension of disbelief: loved the Morepork!).  As Sir Toby, dashing Peter Hayden is funnier than I have ever seen him, demonstrating mastery of physical comedy with some impressively athletic leaps onto tables and precarious perching on ladders, and of course the pickled herring farts win over the groundlings.

He is perfectly complemented by clever Julie Edwards who makes an exemplary Maria: cosy, saucy, shrewd, conniving, loyal and loving in one scrumptious bundle – Sir Toby is lucky to get her! (Edwards is adept too at projecting her voice without shouting. Some of the less experienced cast members will be lucky to make it through the season if they don’t treat their vocal chords more kindly in what is an exceptionally boisterous show.)

The one constantly missing out on love, despite having been adored once, is lanky Sir Andrew, amusingly interpreted by Jonathan Martin, in his Smurf onesies and tendency to get caught up in tubs of trees. His comical fight with Cesario elicits shouts of joy from an already over-excited audience. There’ll be tears… How great, though, to be in the midst of an audience that is simply loving every moment of this old classic.

Maybe it is the Pop-up Globe or Shakespeare Globe Centre NZ that has created such a nationwide appreciation of the universality and contemporary appeal of Shakespeare. Whatever, I applaud the Fortune enthusiastically for seizing the moment with this excellent endeavour,* and admire the ingenious solutions Henson has found to stretch his eleven actors.

I think the only member of the striking, practically feral cast I have not mentioned is one of the most delightful: Shaun Swain, who charms whether as prim maid, KFC-munching priest (love the business with the serviette!) and best of all, courtier Valentine dressed in a giant red velvet heart, carted offstage over the shoulder of the Duke, still sipping his wine.

Altogether, Henson’s original, boldly physical Twelfth Night seems set to be a sure-fire winner, especially with the younger generation. It is rambunctious and hilarious, fast-paced and high-energy, with an abundance of great music, clever jokes and sight gags, many sliding from merely crude into blatantly lewd. Some of the funniest moments in this risk-taking production come from accidents, mistakes or fluffed lines, which the cast have the experience and wit to pounce on, with some quite brilliant saves and ad-libs.

The curtain call inevitably becomes an excuse for yet another irresistible song, with the audience clapping along, clearly wild to get up on stage, grab a glass of mulled wine, befriend their fav character and become part of that glorious crazy world. So waste no time in hastening along, as I predict you may well want to join this mad, wild party of midwinter misrule, not just once, but twice or even thrice!

*(The Fortune has initiated a great Backstage Programme, under Shannon Colbert, with live video links to the rehearsals so the school students can watch and question the actors.) 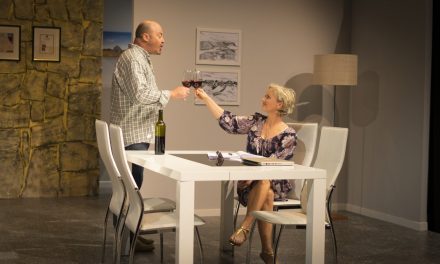 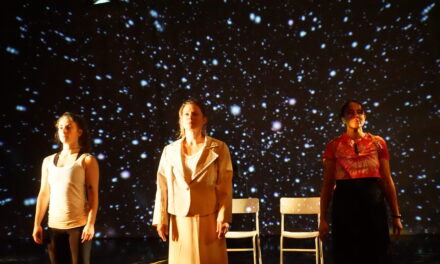