Interview with Romain Guimard, Acrobat with the French Compagnie XY 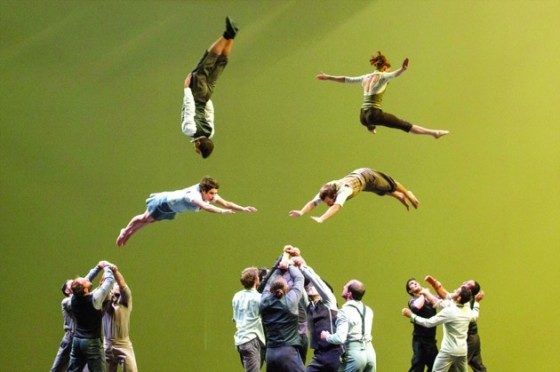 The company of acrobats known as XY is touring the United States (Discovery Conservancy Green, Houston, TX; Spoleto USA Festival, Charleston, SC; Lincoln Center Festival, New York, NY) in June and July with its last performance “il n’est pas encore minuit” (“it’s not yet midnight”).  Romain Guimard, one of the acrobats with the company for many years, answers our questions before leaving for the tour:

Nicole Birmann Bloom: What does the title mean in reference to the performance? Could you tell us more about its sources? And how long did the company work on it?

Romain Guimard: The title “Il n’est pas encore minuit” refers to a moment suspended between two worlds, two time-spaces, two states. At this precise moment, a lot has already been going on but there is still a lot of room for possibilities.  This is the instant when the imagination has all the room to express itself freely. And finally, it is the place where all of the performers join each other to create something greater than they could have achieved by themselves.

After the performance of “Le Grand C”, we wanted to create a new show with more people that would include performers we encountered during touring.  We met each of them during short sessions (one or two weeks spread over 18 months) and trained together, first to get a common acrobatic language, and then to use that simple language to create new combinations exploring all the movements we could do, letting ourselves be free to dream without any constraints.

By that time we had two things we wanted to bring in the show: Planks for the acrobatic possibilities they offer and Lindy Hop dance for its high, joyful energy and its open, crazy look and feel. Then we got together for four months to create the show as a collective, deciding together, having each one of us following and leading the group while finding a true balance. We had the help of an outside eye, Loïc Touzé, a choreographer who gave us feedback on where the group was, and who helped us to reveal some of the honest truth about our collective.

Lastly, I think that acrobatics talks about our fears, about overcoming them, and about challenges. It is a universal language: its speaks to everybody without any special requirements, and therefore that makes it a very popular art form for all, including children and older people, poor as well as rich. And I think that beyond the acrobatic challenges, the audience feels that something bigger is happening that makes this acrobatics more than a simple destination: it imparts purpose. The audience who is already moved by the circus aspect of it welcomes this process warmly and with great empathy.

Nicole: XY is an ensemble of more than 30 people. What are the backgrounds of the performers? Where does the company recruit its members? What is the daily routine of the acrobats and athletes?

Romain: We don’t do any casting; we just work with people we meet during our travels, people we’ve trained with and with whom we feel a connection that is beyond acrobatics itself. When we gather a team, we aren’t necessarily looking for the best acrobats, but for the ones who may also fit into the collective, who could have something to bring to it (positive energy, generosity, nice craziness, kindness…). We are a lot of people in the company and each one of us has his/her own history, his/her own sources of inspiration. Our goal is to collect these stories and inspirations and to find the ones we might all embrace, the ones that might bring our acrobatics to places we might not otherwise have found.

Regarding our training, it’s very diverse, some of us started practicing acrobatics in our twenties, some as young as 6 years old, only a few of our flyers have a gymnastic background, but our strength comes from practicing together a lot to learn to know each other, to discover our common languages and rhythms.

Our routine is a lot of pure collective acrobatics; after an individual warm up, we work with little groups before rehearsing our collective tricks for two to three hours; and we practice every day we have a show plus the day before the first show when we are in a new place.

Nicole: The performers are daredevils and the risk is huge. How do you and your fellow company members address this?

Romain: Our specific daily practice makes our Acrobatics safer than it appears.  There is always a physical risk but we train to minimize it, and accidents happen but, thank God, rarely and rarely badly.

The real risk we take is deeper than that. The main goal of the company is not only doing a show with collective acrobatics, the goal is to do it as a collective, with each of us growing together, with the help of each other, as interdependent individuals. The collective way of doing everything from daily practical things to creating a performance through rehearsal is our identity. It’s not always easy, but it says something about finding a way of doing incredible things together, united, despite our differences.

Sometimes circus students ask us if it is true that we build three columns of five people for our shows. We answer that we do something way more difficult: We agree with each other.

Nicole: With this show and the previous performance, XY has toured internationally. What was the most striking comment you heard from audiences, and from professionals?

Romain: We’re happy when our message of solidarity — beyond our acrobatics– gets to the world because it really needs it right now.  Otherwise, we make people fly. I mean, yes, concretely a little bit in our show but besides that, one of my favorite comments is a person who thanked us for having made her dream that she could fly.

Romain: We have several projects in development: We are working on a creation that will take place in a public space where we’ll invite people to an unexpected trip, allowing them to reconnect peacefully with their own feelings and with their neighbor’s feelings.

The transmission has always been in the heart of the company, and we keep developing that aspect alongside and within our shows each time we create one, and also by being involved with circus schools in France and in several European countries as well as circus schools in Palestine.

We are also willing to bring together acrobats from companies we know as well as scientists to spend a week researching Acrobatics.

And lastly, a new work will be released in fall 2019, but we’ve barely begun to think about it.

Nicole: Thank you, Romain…. See you at the performance!

Interview conducted in May 2017 by Nicole Birmann Bloom, Program Officer for Performing Arts at the Cultural Services of the French Embassy. Reposted with permission. Read the original interview here. 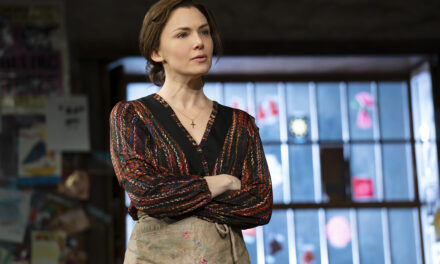