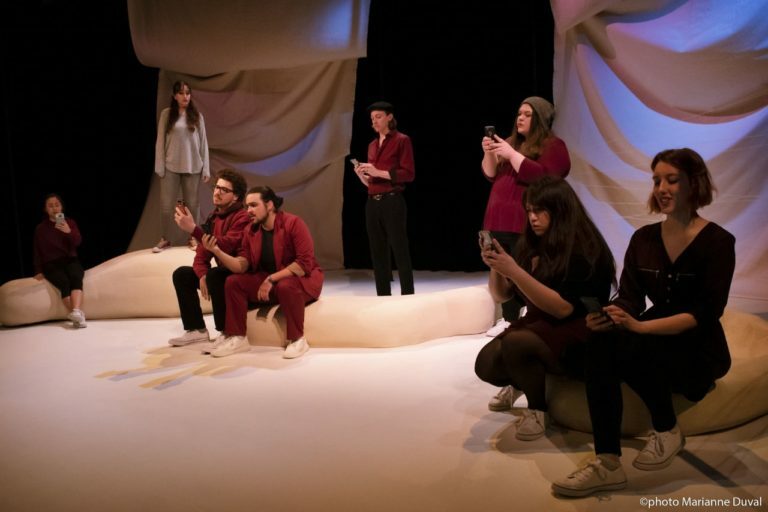 "Love And Information" by Caryl Churchill. A production of the MFA directing program in the The theatre Department at the U of Ottawa

None of this has any serious material substance (the set by Paul Aucler and Margaret Coderre-William’s lighting design bring an enormous emotional atmosphere to this world that plunges us into a constant whirlpool of instability).

What happens is rather simple. The young people reconverge in groups of 2 or 3, talk to each other, listen, or just watch and are constantly walking about. They ask about each other, they mention events they have seen, they discuss ideas they have heard, they throw in serious scientific of political notions that one might hear from time to time on the news and there are “discussions” that follow but we quickly are aware of the fact that all this “information” is treated as trivia…nothing produces any substance, nothing is understood, the voices do not exchange information, they use words and then pass on to something else that is totally unrelated. Logical connections are constantly broken…almost like a surrealist poem based on the principle of the “cadavre exquis!”

And in all this talk…which leads nowhere, there is a total disconnect of any emotional feeling, of any concern, of any empathy, We hear nothing but words and vocal tones.

At one point in the performance we have the impression that some of the speaking voices are losing their minds and are actually very troubled individuals because they are clearly confused but those changes are rapidly passed over as so much pathological slippage that is quickly absorbed into the general banter that gobbles everything up in its black hole of nothingness. The staging might have made a bit more of that developing tendency but the director chose not to.

Churchill has captured the way current instruments of communication are slowly producing generations of heads that do not hear what is being said. Empty heads. Nothing has any consequences, no ideas are shared, nothing is developed, there is no understanding of anything and a total lack of human empathy has invaded our interrelationships.

The performance continues, the discussions continue…there is no beginning, no end just a continuum that goes nowhere in particular, a hyper-reality that has created its own new reality…going where?…

There it is…Yet Mme SØrensen has kept the whole performance moving at a good pace so we barely have a chance to dissect it all but we are carried away by the rhythmic energy of those chattering bodies that hold our attention, even eliciting the odd giggle from time to time. The Team has understood what the playwright is trying to say. They caught this world that goes nowhere and for someone of my own generation, it leaves us with a terrible sense of meaninglessness and loss. For a much younger person, I am convinced the reaction would be quite different.

Go see this show. Love And Information continues at the Academic Hall of the U of Ottawa from March 26 to March 30 at 8 pm.

This article appeared in Capital Critics’ Circle on March 27, 2019, and has been reposted with permission. 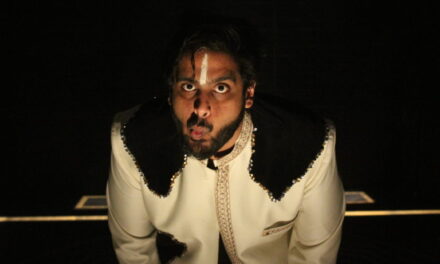