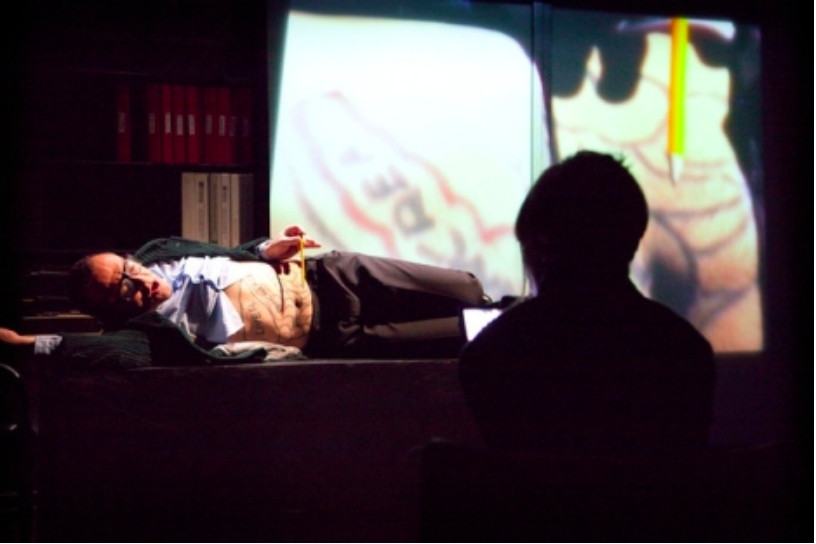 A new play about Magnitsky opens in London, three years after the lawyer’s controversial death. Extracts of original diaries and letters are used to help re-enact what happened to Magnitsky in detention in this powerful stage drama.

Exactly three years ago Sergei Magnitsky, a lawyer who accused the Russian authorities of large-scale theft and corruption, died in prison. To mark this anniversary, the London-based Sputnik Theatre Company, which specializes in contemporary Russian drama, is staging a play about the case.

The play, One Hour, Eighteen Minutes, which runs until Dec. 1, also coincides with the vote in the U.S. House of Representatives on the controversial “Magnitsky List”, a proposal to deny visas to officials connected with the lawyer’s death.

The 37-year-old Magnitsky believed he had uncovered a tax rebate fraud involving $230 million. He was planning to testify about what he had learned, once he was released from custody, but died in confused circumstances a few days before the limit of the time he could be held without trial would have expired.

Elena Gremina’s One Hour, Eighteen Minutes is a short, but hard-hitting drama that uses original documentary materials, including Magnitsky’s diaries and letters to piece together what happened before and during his detention and death in 2009.

Some of the evidence comes from simple eyewitness accounts. His mother describes his broken hands when she saw him in the morgue and asks why the post-mortem did not explain this:  “I don’t know who he was fighting with”. Other parts give a voice to the police and doctors. Four actors play Magnitsky’s friends, family, and colleagues as well as judges, doctors, policemen and ambulance drivers. The play, translated and directed by Noah Birksted-Breen, represents a kind of trial-by-theatre of the people involved. 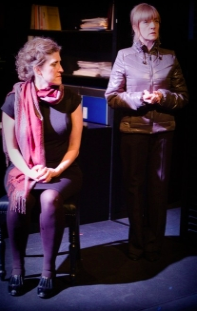 Four actors play Magnitsky’s friends, family, and colleagues as well as judges, doctors, policemen and ambulance drivers. The play, translated and directed by Noah Birksted-Breen, represents a kind of trial-by-theatre of the people involved

The judge who extended Magnitsky’s pre-trial detention declares that “one million prisoners in jails is proof of how hard judges have to work … giving boiled water to prisoners is not in a judge’s job description … we reflect the will of the government.”

An officer in a fur hat and leather jacket arrives at the legal office and beats up a female lawyer. The contrast of the brutally violent struggle during which he confiscates the tax-related files of one of their clients and the civilized surroundings intensifies the shock. He tells another lawyer who appears: “She pulled a gun on me. Do you know how many years you could get for that? You keep your mouth shut.”

The play’s title refers to the length of time between an initial call to the doctor, to say the prisoner had been found lying on the floor, and his death one hour and eighteen minutes later. During this time, doctors waited outside Magnitsky’s cell as he lay dying. When they were finally let in, they found him dead on the cell floor.

The play’s version of events is clear: while an indifferent medic sits fiddling with his mobile phone and its “polyphonic ringtone”, the audience can hear the noise offstage of eight prison guards beating Magnistky to death with rubber batons.

These technical special effects are used to give surtitles with names and places, replicate the effects of dehydration, or show a close-up image of the victim’s vital organs drawn in felt pen on an actor’s stomach as he lies on a table. He explains the agony involved in dying of pancreatitis, which the lawyer suffered from untreated. At the end of the play, a projected video montage of Magnitsky, when he was alive, fades to black. 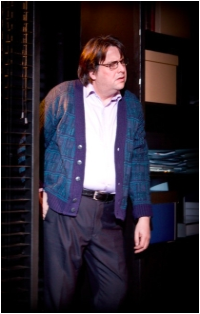 The production makes excellent use of video projection. The prison doctor, Alexandra Gauss, justifies her absence during Magnitsky’s death while she is lying on the floor but with her talking head filling the giant screen between the desks and bookshelves that serve as a set.

The strongest parts of this compelling drama include actual quotations from the records the lawyer kept in prison and the letters he sent to his mother, movingly portrayed by Wendy Nottingham.

Natalia Magnitskaya provided materials for the play. Her horrors have not ended with her son’s death, as her character tells the audience. This year the Russian government is pursuing a posthumous prosecution against Magnitsky, and “anyone who stands up for him is now a criminal.”

The panic of Magnitsky’s wife as she runs from place to place, trying to understand what has happened, is terrifying. She describes his last words when he was arrested: “Don’t worry; I’ll be back tomorrow”, adding “and that was the…” Breaking off mid-sentence represents the brutal interruption of their lives. The Kafka-esque system her husband is caught up in, with its inhuman face, contrasts poignantly with a quote from their son: “If only I had a magic wand, I would teleport the people who are doing this to Dad to another planet.”

Some of the characters in the play present their own counter-arguments. Oleg Silichenko, the investigating officer responsible for the year-long detainment tells us: “Magnitsky was a lawyer for the thieves. It is spelled businessman, but it’s pronounced thief.”

There are welcome moments like this of comic relief, in what might otherwise be a deeply depressing play, including the amiably useless woman from the British foreign office, who gives one of Magnitsky’s colleagues, in exile in London, advice on “how to stay safe.”

Silichenko, convincingly played by the versatile Danny Scheinmann, leafs through the hundreds of petitions the lawyer filed from prison and dismisses them with glib remarks such as “so?” or “pure science fiction”.

“Magnitsky has now become a poster boy for capitalism in ‘medieval’ Russia. Don’t make me laugh,” he sneers.

Gauss, the doctor, also complains: “Magnitsky is now this famous guy and everyone talks about this one story.”

The wider significance is left implicit in the play, but the case is widely seen as symptomatic of high-level corruption, human rights abuses and impunity in Russia.

Gremina’s play premiered in Moscow in June 2010.  Gremina works with young playwrights in Russia and has won awards for her plays, some of which were commissioned by London theatres like the Tricycle and the Royal Court.

In 2002 she co-founded Teatr.doc, a collective, political project in Moscow, which produces topical documentary theatre, basing the script on actual texts, interviews, and real stories. The resulting plays, patch-worked from authentic materials, verbatim testimonies and improvisation, are a mixture of art and social analysis.

“If the system which killed Magnitsky and continues to kill other people persists, then at least in our theatre we want to testify against it,” the group’s website says.

This post originally appeared on Russia Beyond on November 20, 2012 and has been reposted with permission.