Artistic Exchange Between Netherlands and Brazil

Rio de Janeiro hosted many interesting events in the last months. One of them was HOBRA – Artistic Residency Netherlands-Brazil, a cross-sectional experience that was part of the cultural calendar of the 2016 Olympic Games. HOBRA happened during the three weeks preceding the opening of the big event. From July 11th until 31st, artists from various areas – Brazilians and artists based in the Netherlands – produced amazing works in a collaborative way. It was the first time that partners from the two countries worked together on this scale to create a cultural programming within the context of the Olympic Games. 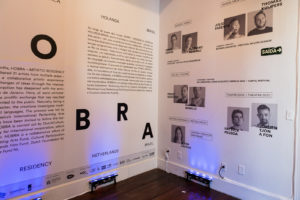 HOBRA – A Holland-Brazil Artistic Exchange Project. The word “obra” means “work” in Portuguese, as in “work of art”.

They worked in pairs, each composed by artists representing the two countries, with the duos being made of artists from the same segment: Literature, Film, Theatre, Documentary Theatre, Music, Dance, Design, New Media, Contemporary Art and Architecture. The works were presented in a big event on the 31st of July.

It was a production of TEMPO_FESTIVAL, a performing arts event created by Bia Junqueira, Cesar Augusto and Márcia Dias, who selected a team of curators to follow the interactions between the artists. They are responsible for the curatorship of the theatre pairs and theatre is what we are going to talk about. From the Dutch side, the curator was Jorn Konijn.

Two Dutch theatre directors and two Brazilian playwrights were invited to work together in two forms of theatre. The artistic proposals were different from each other and so was the creative process, but both pairs decided to create site-specific works considering Rio de Janeiro landscape and Brazilian political history. 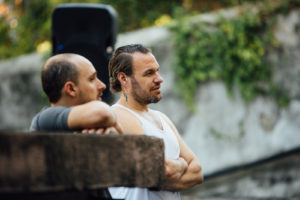 Sjaron Minailo and Pedro Kosovski created Arariboy, a short piece of what we can call a pocket site-specific opera that took place in a beautiful and precarious hidden spot at Centro Cultural Laurinda Santos Lobo, the venue that hosted the whole event in Santa Teresa, a bohemian neighborhood in the historic center of the city.

Sjaron Minailo, Israeli living in Amsterdam, is a director of contemporary operas and musicals. In his works, he deals with the fusion of music, dance, theater, fashion and visual arts. Although he doesn’t see himself as a conceptual artist, the work presented in Rio was taken as a very conceptual piece. Pedro Kosovski is a playwright, actor, director and a member of Aquela Companhia.

He explained the starting point for the creative process was choosing the right place for a site-specific performance: the façade of a house almost in ruins. The site evoked the ideas of memory, ancestry, and the opposition between inside and outside. The audience stayed outside, where it is dirty and messy. In contrast, inside the house, it seemed clear and clean, white, sterilized. Two figures would represent that opposition: the actress Carolina Virguëz stayed outside the house, as the body, a worldly figure; as the opera singer Gabriela Geluda stayed inside, as the voice, a phantasmatic aspect. 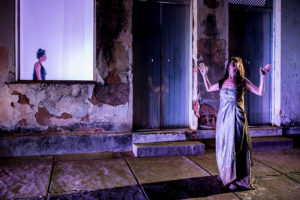 Ancestry and memory are common concepts in Kosovski’s latest work related to the city of Rio de Janeiro. One of the subjects of his new play is the story of Arariboia, an indigenous chief of the XVI century who fought alongside the Portuguese invaders. The famous deed of Arariboia was swimming across the Guanabara Bay, a famous postcard image from Rio, and winning a battle against the French invaders. As a symbol of this imagery of literary romantic native pre-colonial time, Kosovski and Minailo chose to work with an iconic opera, O guarani, a piece by Carlos Gomes, the Brazilian best-known opera composer. They created a sound landscape for the story of a boy, Arariboy, who wants to swim across the Guanabara Bay but drowns in its deep filthy mud.

But there is more about Arariboia. He fought against the French but also against other local tribes (his fellow countrymen, his supposed natural enemies). So I see a witty aspect in the title Arariboy. Perhaps it is a wink to some kind of descent to the native iconic figure who is praised as a hero in official white men history but who is a traitor to his kind. The colonized man who identifies with the colonizer project: that is painfully familiar to Brazilian culture and politics. 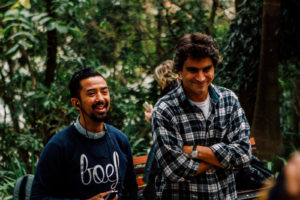 As for Documentary Theatre or DOC Theatre, as it was called, the Dutch were represented by Jörgen Tjon A Fon, an art director, producer and actor from Suriname who is based in the Netherlands, and Patrick Pessoa, Professor at the Philosophy Department of UFF, theatre critic and playwright. They were very engaged in the creative process. There was a workshop with 15 actors and actresses, in which they worked with verbatim theatre exercises. They experienced translating and writing together and also went to the theatre to see and discuss a few plays in order to create a vocabulary in common.

They created Invisível (Invisible), a verbatim itinerant play which also had a site-specific appeal. Just a few steps from Centro Cultural Laurinda Santos Lobo, the play took place at Museu Casa de Benjamin Constant, the house of a 19th century military and professor who coined the words in the Brazilian flag, “Order and Progress,” inspired by the formula of positivism: love as a principle, order as a foundation, and progress as a goal. Love, as we can see, was left aside. But this is the house where the first Brazilian flag was sewn.

So, in this historical site, the audience listened to quotes from ordinary people in the streets and from Brazilian anthropologist Darcy Ribeiro. There was also the quoting of the preface of The Invisible Man, by American novelist Ralph Ellison in a fine performance by Mariana Nunes, who also performed her friends WhatsApp-statements about being black women in Brazil. But the key scene was a dialogue between a local Hamlet disgusted by the realm of a usurper president and a revived politically engaged soccer player from the 80’s, Sócrates.

Read more about the dramaturgy in this short article by Patrick Pessoa published at the project’s site: https://hobra.art.br/2016/07/10/socrates-x-hamlet-socrates-x-hamlet/ Scroll down to find the English version.

In the end, the cast drew on the garden floor a new proposition for our flag. Instead of “Order and Progress,” “Love and Revolution.”

It seems to me that some Latin-American artists have found in the contemporary documentary theatre a timely gender to approach their own view on political history and identity aspects. After 30 years of the start of democratic reopening, post-dictatorial generations are trying to rewrite history as they understand it. And they are doing it on stage – not on books – experiencing eye-to-eye contact with the audience. In this regard, the staging of Invisível and the workshop that preceded it came in due time for theatre-makers in Rio.

But everything about the HOBRA project made way to the warm response to the resulting works. By showing all the works on the same occasion, combining different approaches to different art forms, the event was very successful in making audiences drop their guards and take a closer look at art forms they are not used to attend – such as contemporary opera.

Arariboy was a visual, sensory experience with its abstract evocative images and sounds. A compact geometrical production. Invisível, on the other hand, had some sense of humor with a very discursive, prolix and compromised proposition. Considering both works, it seems to me it was a great exercise to look for images and discourses related to Rio and Brazil from the start point of completely different places of speech. 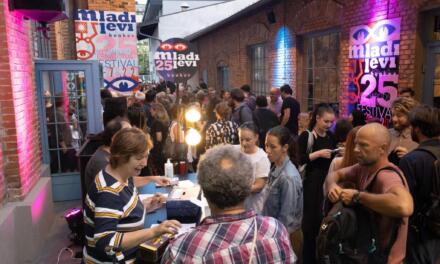 Highlights from the Mladi Levi Festival in Ljubljana 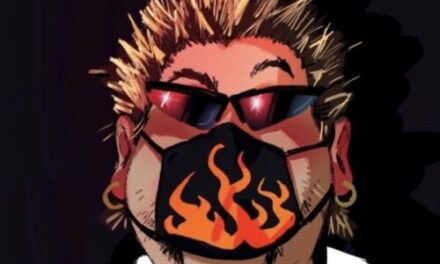 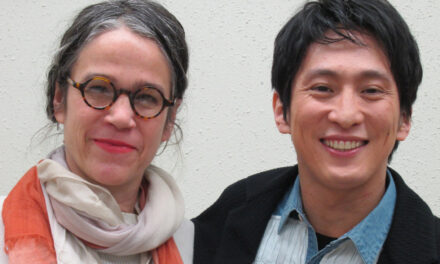