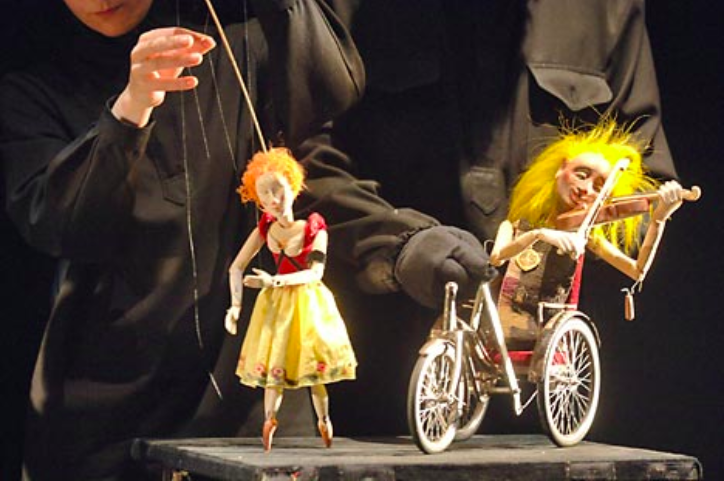 All of these performances have toured halfway around the world, appearing at festivals in Avignon, Edinburgh, the United States and Canada. Source: ITAR-TASS.

Rezo Gabriadze has taken his Tbilisi-based Puppet Theatre on tour for the first time in five years. The man who wrote the screenplays for Mimino and Kin-Dza-Dza finished his tour in Moscow with new versions of Ramona (a story of love between two steam trains) and the World War II-themed Stalingrad.

Gabriadze is the kind of figure who can truly be called a man of his age. He was the writing talent behind the films of Georgy Danelia – those cinematic masterpieces that live forever in the subconscious of every Russian currently over the age of 25. Even if writing the screenplays for Mimino and Kin-Dza-Dza had been his sole contribution to this world, it would have been enough to cement his name in the history of performing arts.

But his work does not stop there. He has written and directed dozens of other films and produced a huge number of paintings, drawings, and sculptures (including the tourist favorite Chizhik-Pyzhik on St. Petersburg’s Fontanka). Yet, perhaps the most famous of all his creations is the Puppet Theatre, which he founded in 1981.

Gabriadze built his theatre in Soviet-era Georgia against all the odds, rebuilding a tiny building in the center of Tbilisi’s Old Town with his own hands. They say that one of the main turning points in gaining support from bureaucrats for the project was Gabriadze’s favorite phrase, which he attributes to a French Minister of Culture: “Monsieur Leon Armand Guerry claims that a country which has no puppet theatre has no right to call itself a country of theatre.”

Over the past 30 years, Gabriadze has created six shows, including Alfred and Violetta, which is based on Dumas and Verdi; The Emperor of Trabizond’s Daughter, a story based on the chivalric tales of the title character; and an entirely original piece titled The Autumn of My Spring. All of these performances have toured halfway around the world, appearing at festivals in Avignon, Edinburgh, the United States and Canada. Gabriadze has also staged shows at theatres other than his own, including performances in Switzerland with the world famous Peter Brook and in the U.S. with Mikhail Baryshnikov. 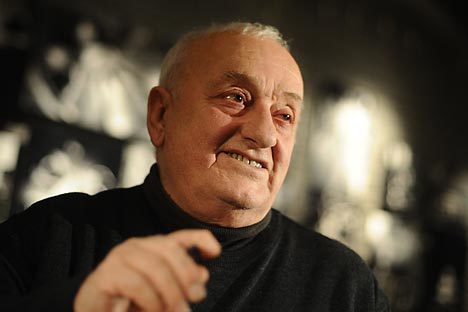 Rezo Gabriadze was the writing talent behind the films of Georgy Danelia (Mimino and Kin-Dza-Dza). Source: ITAR-TASS.

Gabriadze insists that his theatre is for adults and that each of his shows addresses complex philosophical issues – although this does not prevent the onstage inclusion of a talking flashlight or a chattering chicken. Another facet of Gabriadze’s Puppet Theatre is that his puppeteers never speak a single word; they bring their characters to life only through their actions.

The theatre’s tour opened with the premiere of Ramona, a new version of Gabriadze’s latest show.

Two steam trains, Ermon and Ramona, love each other no less than Romeo and Juliet. But just like Shakespeare’s lovers, they can never manage to meet. He is a handsome IS-135 who chugs around the post-war Soviet Union, while she is a petite T-1-1-1 who works as a shunting engine and almost never gets to leave the tracks around her home station.

A radio tower called Olga, a chicken named Keto and circus artists look on in sympathy at their plight. They try to help the couple, but all in vain – in the finale the lovers are killed, while the onlookers are threatened with jail time for damaging state property.

Ramona is a show about how the past can never be brought back and can never be recaptured, and how the real world tramples on romantic love.

The theme of love also features in Gabriadze’s long-standing and hugely popular production, Stalingrad. A plow horse named Alyosha is in love with a circus horse called Natasha, while Mother Ant loves her son, who is crushed under a soldier’s boot.

The show is about the most terrifying conflict the world has ever seen, but Gabriadze conveys this through animals experiencing human emotions. The impetus for creating Stalingrad was not the battle itself, but the image of a plow horse with a wounded leg, which appeared in the memoirs of a British correspondent about thousands of horses killed in the Soviet battle.

Gabriadze does not get involved in questions of right or wrong. Instead, he talks of war as an immense and appalling disaster in which everybody loses their mind and dies as the result of the cruelty of others. His play has an electrician who defends himself from bullets with a parasol – a single moment which says more about the horrors of war than any world film. The Washington Post wrote of Stalingrad that, “it may be a puppet show, but it’s as far from our perceived idea of what a puppet show might be as a sneeze is from a hurricane.”

First published in Russian in Gazeta.ru.

This post originally appeared on Russia Beyond on November 12, 2012 and has been reposted with permission.