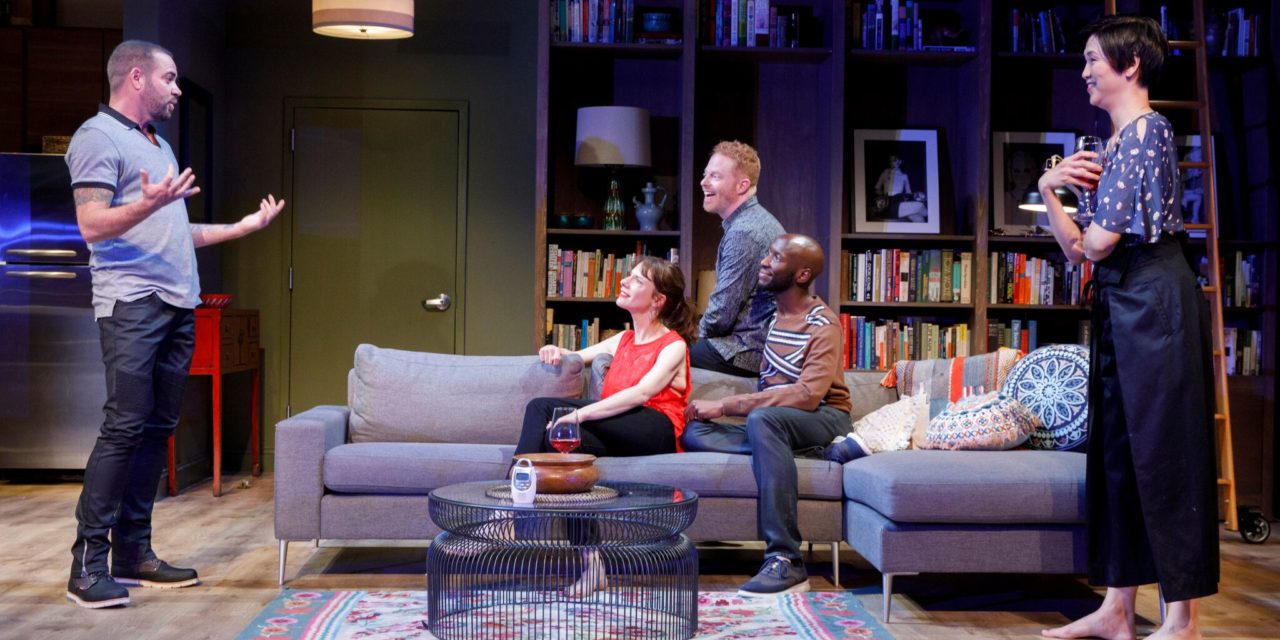 The cast of “Log Cabin,” a new play by Jordan Harrison now open at Playwrights Horizons. (Courtesy of Joan Marcus).

Log cabins are man-made. They’re visibly intertwined, tangled structures forged by forcing lumber together into sturdy joints. Neat, organized and well-built to the eye, only air separates the sinews of dead timber that construct their walls. Inside, they’re places we may go to for warmth, for shelter in the night, for the illusion of protection in a dark and dangerous wood. A candle-lit glow from within may give them the appearance of comfort and safety, but don’t be fooled. Log cabins are in the wilderness, too.

Somewhere in there, I suppose, lies the metaphor of Jordan Harrison’s so-named play, which premiered at Playwrights Horizons Monday night.

But audiences of Harrison’s world premiere about conservatism, about entitlement and intolerance where we least expect it are not plunged inside a wooden lodging as one might anticipate; instead, they sit inside a chic, well-decorated and hip Brooklyn apartment, one imaginably designed with such a scrupulous eye so as to mask any decay hidden in its walls.

After a month of Pride, Log Cabin is a cautionary tale about the price of privilege, of survival after assimilation, of what we leave behind after fleeing the fringe.

Set in the years between 2012 and 2017, Log Cabin introduces us to two couples, one gay, the other lesbian, Ezra (Jesse Tyler Ferguson) and Chris (Phillip James Brannon), Jules (Dolly Wells) and Pam (Cindy Cheung); friends, seemingly, who get on with the modern privileges of leading open, married lives plagued by the stodgy and palatine questions of affluent adult life. To have children or not? If so, how to raise them? Quince pudding or cheese?

But when a mutual friend comes out as transgender and transitions from Helen to Henry (Ian Harvie), both pairs, comfortable with their relative equality, must struggle to reckon with a broadening of the rainbow. Begrudged to once again rise to the fight, it is this small group of gay men and lesbian women who find themselves on the side of stubborn misunderstanding, of reluctant acceptance and little respect for the humanity of others.

For sure, Log Cabin is a difficult undertaking for the 2015 Pulitzer Prize finalist (Marjorie Prime). It’s a play that grasps at the posterity of LGBTQ narratives. Gone are the days of plays that seek to dramatize the fight for queer equality; now, Harrison suggests, we must dig deeper into the grime after the dust has settled, peer at the inequalities that have engrained themselves into the community itself and reckon with the ugly reality that many cisgendered gay men and women, comfortable with their gains, have left those transgender Americans still battling for acceptance with little support.

But any attempt to see the forest still amidst the trees is a precarious one, and, as a result, Log Cabin is only minimally successful in its project.

To construct some effective narrative about the path of transgender equality —  or about any movement, that is — one must be armed with some sliver of hindsight. But in the midst of the contemporary fight, Harrison seems to be forever treading water in his writing, trying with all of his might to pick his audience up and throw them into some future consciousness, able then to look at the complicated, twisted narrative of this play with some earned wisdom. Without it, Log Cabin falls flat, feeling like an inevitably forced work  — one delivered not prematurely, per se, but perhaps incoherently.

His cast, though led by seasoned actors including Jesse Tyler Ferguson, are left with few tools to craft convincing performances and can do little to turn what becomes the sound of tiring, exhausting academia, queer theory turned dialogue, into something that sounds remotely like a believable conversation. And while Pam MacKinnon (Who’s Afraid of Virginia Woolf?) seems to have concentrated her direction on keeping the play light, fast-moving and comedic, she is similarly disarmed.

After all is said and done, one might easily say that Harrison is simply doing the righteous work that any playwright dedicated to the utility of theater must do: using the stage as a place to work through, to unpack and better understand contemporary battles. Theater not as ammunition, but as discourse all the same.

But Harrison does even that asymmetrically.

At the show’s close, Harrison allows Jules and Pam’s toddler son (played by the same adult actor who portrays Henry, the transgender man at the play’s center — an artistic choice that, by the way, I don’t find worth the thematic effort) to sit before the audience and unpack the lessons at the play’s heart, to explain the show to us as if we’re naive children.

“And what was odd is that our heroes, the boy and boy, and the girl and girl, they didn’t welcome these new pairs. They’d forgotten what it was like to not be welcome,” he instructs.  “But then something happened, and they remembered. Something awful happened and the floor fell away. And the boy and the boy, and the girl and the girl, were reminded how far there was to go,” he finishes, Harrison relegating any success he’s had at forming a complicated, discursive narrative into a one-dimensional cautionary tale of the Trumpian age.

For a show that seeks to construct a more complex, intricate and accurate narrative of the contemporary LGBTQ struggle, it’s an ending that is disappointingly simplistic and shortsighted in its effort to boil modern advocacy down into a singular, hand-holding effort against a common villain; most of all, it’s an unearned conclusion to what would otherwise be a valiant undertaking.

Oriza Hirata’s “In the Heart of a Forest”: Mastering Multilingual Performance