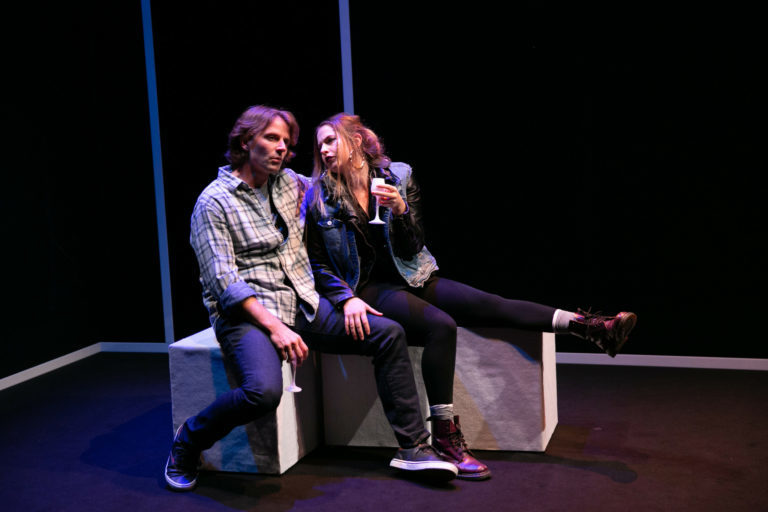 The Boston Commonwealth Shakespeare Company began life as a summer program over twenty years ago when they began performing free outdoor Shakespearean events on the Boston Common. In 2013, the company broadened their productions and extended their season when they were invited to become Babson College’s Theatre in Residence. Under the title Universe Rushing Apart, the company is currently presenting two Caryl Churchill one-acts: Blue Kettle, first performed in 1997 and Here We Go, which débuted at the National Theatre in London in 2015.

Both works are fascinating in very different ways likely because they were written close to twenty years apart. Throughout her career, Churchill has searched for new means to express her ideas which continued to develop and change over the years. At the time Churchill wrote Blue Kettle her sons were about forty and she was approaching sixty.

Blue Kettle, the story of Derek (Ryan Winkles) a forty-year-old man who seeks out women old enough to be his mother all of whom gave up their baby boy for adoption since they were unmarried. As Mrs. Plant (Karen MacDonald), the first of the mothers he meets, says, “you didn’t have abortion like now.” His scam, if indeed it is one, is to tell each of the four women he finds that he is their long-lost son in the hope that they will either give him or leave him money. On the other hand, Derek may have an enormous need of maternal love as his girlfriend Enid (Sarah Mass) suggests. Derek’s own mother (Siobhan Carroll) is hospitalized in a geriatric ward and appears demented.

Though initially, he is able to convince the women he is telling the truth, their reactions differ. At first, Mrs. Oliver (Maureen Keiller) is more concerned with showing Derek photos of her proper family than in learning much about him. Mrs. Vane (Karen MacDonald) wants to invite Derek and Enid to dine with her and her husband (Maureen Keiller): Cross-gender casting is frequently used in Churchill’s plays. Miss Clarence (Siobhan Carrol), the only one of the four who never married, barely remembers him.

As the play continues, words begin to fail presumably because of the various characters’ discomfort with situations that become embarrassing. Bit by bit the words “blue” and “kettle” appear in their sentences without their being aware they are saying or hearing anything strange.  The more they converse, the more they inject blue and kettle. In the last line, Derek can only muster up “B.K.” He has lost the ability to speak. 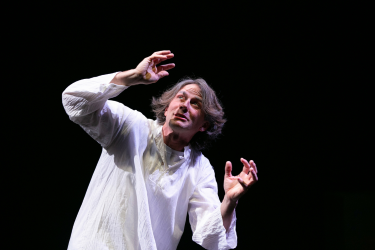 Here We Go was first presented when Caryl Churchill was approaching eighty, an age when people are concerned about or threatened by their mortality. The play is divided into three sections in which the tale is told in reverse. In the first titled Here We Go funeral guests who are made up of the cast of five enter from behind the scrim as music plays. The first to come on is a woman in tears who picks up a frame that contains a photo of the deceased which the audience does not see. She signs a book and has a glass of wine. This action is repeated until all the funeral guests are onstage.

Multiple conversations ensue where the various attendees discuss the deceased.  We learn that when he was young he was charming, handsome, and brilliant. As they continue to talk, the guests become dismissive of him. They claim that he was a heavy drinker, bad-tempered, and lecherous.

Each character crosses to a table where she picks up a card and reads aloud how and when she will die.

In After, the second section, the dead man (Ryan Winkles) tries to understand where he is. Dressed in a white nightgown, his feet bare, he looks young despite his gray hair. He is areligious, but well educated and knows the myths and beliefs that have been handed down over the ages: Hell, purgatory, Charon who ferried dead souls across the river Styx to name a few. Now that he has died, he fears that they may be true. In the midst of speaking, he disappears.

Getting There, the last and most disturbing scene is silent. A very sick old man, obviously in pain (Ryan Winkles) is attended to by a caregiver (Siobhan Carroll). Her job consists of undressing him and putting on his pajamas, helping him to lie down, and then dressing him, step by step, putting him in his wheelchair and pushing him through the same area she had previously. Although beautifully acted as are both plays, it is difficult to watch given the fear and dread it arouses. However, even this scene has its comic moment, typical of Caryl Churchill.

Bryn Boice, the director, shows a deep understanding of the two plays. Cristina Todesco’s simple set consisting for the most part of a scrim and white boxes which are reconfigured as needed is effective. Nancy Leary’s costumes are impressive particularly when the actors are cross-dressed as happens several times during the performances.

This article first appeared in Capital Critics’ Circle on November 13, 2018, and has been reposted with permission.