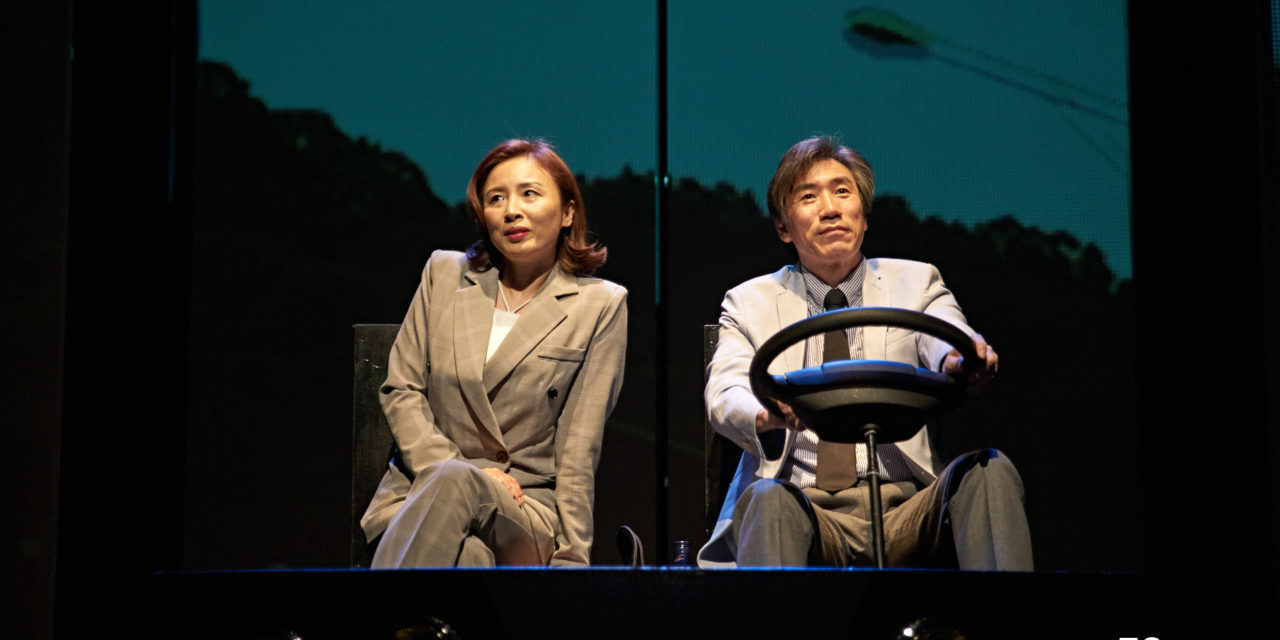 May 5th, 2017. I am at the Algwahaek Theatre in Daehangno to see a show. But who am I, this person sitting in the theatre? On one level, I am a university professor who writes papers and books for a living. I am also a middle-aged father who supports a family of four people and two dogs, who has to save up for his children’s college tuition and home mortgage. Am I a public intellectual concerned about the times and our reality, or am I just a normal guy worried about keeping my family afloat? Maybe the split ego is the real me. How much have I changed in thirty years, from when I took part in the democratic protests demanding direct presidential election? Why do we lose our innocence and become vulgar over time? Won Muintel (written by Hong Chang-su, directed by Yoon Woo-young) is a play that invites this kind of self-questioning.

The meaning of the title is unclear at first. It refers to a muintel, or unmanned hotel simply called Won. You use these hotels by paying through an automated system without talking to a person at the desk. The play mostly takes place in one of these muintels. To be more exact, the setting spans a rest stop, the inside of a car, a foggy river bank, the car again, the site of the Wonmusa Buddhist temple, and finally Won Muintel. Two university classmates, Kang Joong-hwan and Hyun Myung-sook, travel through these locations like in a road movie. Their destination is the muintel deep in the mountains, where important truths are revealed.

The play begins in Seoul smothered in micro dust. The air pollution is as thick as a fog; pedestrians wearing surgical masks float through the cityscape. This background is projected onto six panels upstage. The dusty prologue evokes the stuffiness and melancholy of modern society.

Two friends leave Seoul to attend the funeral of their late advisor from grad school. Joong-hwan, who dreamed of being an archeologist in his youth but is now a successful prep school businessman, drives down to his mentor’s funeral with Myung-sook, an archeology professor and director of the Cultural Heritage Administration. After a breather at a rest stop, they arrive at the empty site of the old Wonmusa temple. During the trip, they dig up truths that had been kept secret for twenty-five years. The two shared memories and laughed over cheap coffee at the rest stop, but they begin to clash as the conversation heats up.

Like an onion, the inner layers of the past are revealed through dialogue in this two-character play. The dramatic structure of approaching revelation through logical language is almost Ibsenite. All aural and visual elements are secondary to language, merely devices to lessen the monotony, as it were. For example, the panoramic scenery that was projected on the screens while the characters drove was a breath of fresh air amidst the dense dialogue. The same goes for the occasional music that played in the car or in the muintel.

Joong-hwan and Myung-sook were fellow archeologists-in-training in grad school. But for some reason, Joong-hwan dropped out and gave up his dreams. Meanwhile, Myung-sook’s career took off; she became an archeology professor and a high-ranking official for the Cultural Heritage Administration. Through their conversations, the past is unraveled one question at a time: why did these friends take such different paths? Why did Joong-hwan give up his dream? How did Myung-sook succeed so spectacularly?

As their argument escalates, Joong-hwan drives Myung-sook to the old grounds of the Wonmusa temple. This was where their mentor had forged a historical artifact to advance his career and the point that the two friends’ life paths forked. Myung-sook finished her degree and was hired as a professor after keeping her advisor’s fraud secret. But Joong-hwan, who couldn’t withstand the lie, left school and became a prep school teacher. 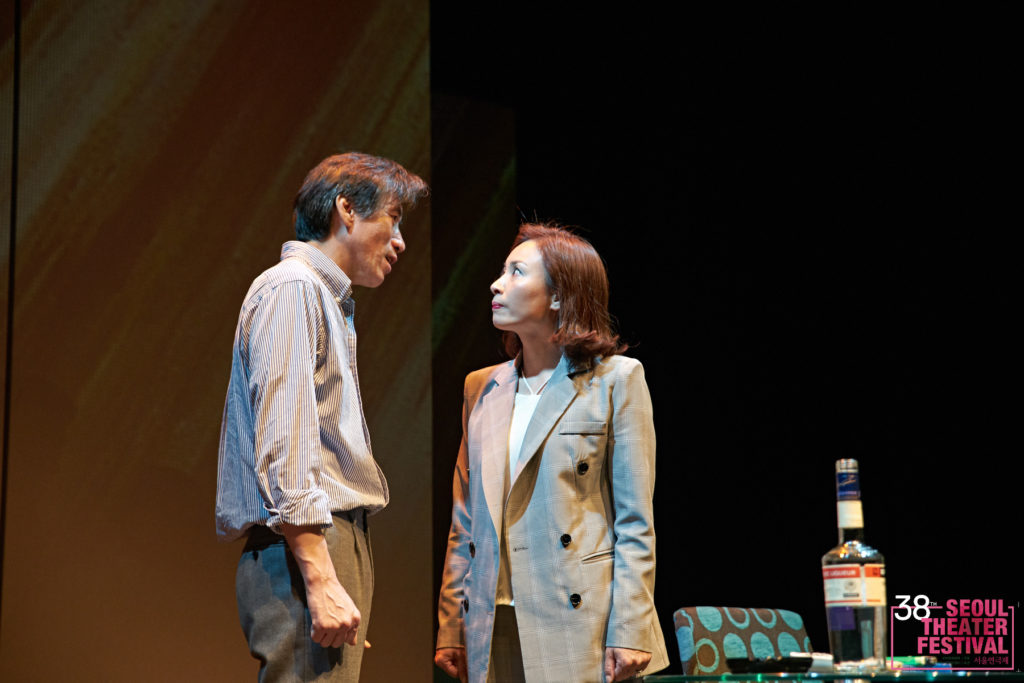 But a sharper twist awaits them in a room of the unmanned hotel that now stands where the temple had burned down long ago. The two make passionate love as soon as they enter the room, but then get in a more intense fight that exposes deeper truths beneath the forgery incident. The real reason that Joong-hwan quit school was that he misunderstood Myung-sook’s intimate relationship with their professor and was jealous. Because of that, he may have set fire to Wonmusa. (Joong-hwan denies the accusation but the play suggests that he is the culprit.)

More revelations are in store. We find out why Joong-hwan initially approached Myung-sook. After succeeding in the private education industry, he had invested heavily in a construction firm. But a major development project was stopped when historical artifacts were unearthed at the construction site, putting the company on the brink of bankruptcy. Joong-hwan called up Myung-sook deliberately to see if she could use her clout to cover up the discovery and let the construction continue. She rejects Joong-hwan’s favor, but then we learn that she is involved in a political corruption case involving archeological research. The two characters are stripped bare until nothing can keep them together any longer. The play cynically shows a member of the 386 generation, brave and critically outspoken in her youth, inheriting her mentor’s fraudulent behavior, as well as a man who had set fire to a historic site in anger of academic fraud become an accomplice to crime. [Translator’s note: The “386 Generation” is a shorthand expression for people who entered college in the 1980s, and were born in the 1960s. They decisively supported the democratic movement against military dictatorship in the 80s.]

Reflections on the Identity of the 386 Generation

Playwright Hong Chang-su says he got the idea for this play from an artifact forgery incident in Japan involving the archeologist Fujimura Shinichi. Fujimura is probably the inspiration for Joong-hwan and Myung-sook’s advisor. But to me, the play’s larger message is about the 386 generation of which the playwright himself is a member. Hong seems to ask that we reflect on the loss of this generational identity as its constituents grow old.

With bitterness, the playwright observes this generation of mass protestors gradually calcify into the social establishment, letting social justice, truth, and conscience fall to hypocrisy, ambition, and greed. Or rather, it might be more appropriate to say that he critiques the philistinism of older generations in a universal sense.

Lee Sang Woo is a theatre critic and Professor of Korean Language and Literature at Korea University. He is interested in the establishment and division of modern Korean theatre and its relationship to the formation of modernity in Korea. His books include Reading the World in Theatre (1995), Iphigenia at the Century’s End (2006), and The Empire’s Capital Meets Modernity (2010).

Translated and edited by Kee-Yoon Nahm