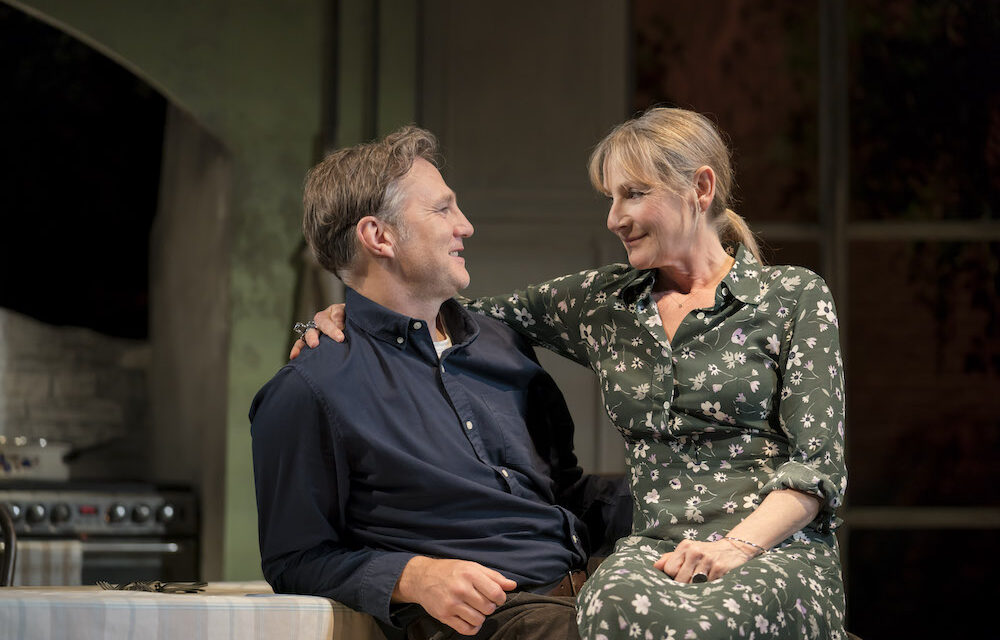 David Morrissey and Lesley Sharp in “The End of History...” Photo: Johan Persson.

Last month, Andrzej Lukowski, London Time Out’s theater editor, wrote a well-argued piece in The Stage newspaper about the strange death of middle-of-the-road drama. Pointing out that the Royal Court, under its previous artistic director Dominic Cooke, once regularly staged a series of middle-class comedies aimed at its middle-class audience, Lukowski says that this kind of play is now as rare as a Dodo in metropolitan venues. In its place has come a series of plays about identity politics, often in more Continental-style stagings, and work that more accurately represents the demographic of the capital. He certainly has a point. So it’s quite ironic that the latest arrival on the Court’s main stage is, wait for it, a middle-class family drama.

It has to be said that Jack Thorne’s The End of History... comes with some baggage: his director is John Tiffany and creatives include movement director Steven Hoggett, which kind of makes this a reunion for the team behind the joyous theatricality of Harry Potter and the Cursed Child. In addition, the cast is led by big names David Morrissey and Lesley Sharp, both of whom are eminently watchable. Finally, the play’s subject matter, which is a story about a left-wing family told over a time span of 30 years, raises hopes that this might be a compelling political drama, a much-needed piece that has something to say about Britain today.

At first things look good. We are in the kitchen of David and Sal, two lefties who live in Newbury. Over three different time periods — 1997, 2007 and 2017 — we watch how they relate to their three children, Carl, Polly and Tom (each named after revolutionaries). In the first scene, Carl brings his posh new girlfriend, Harriet, to meet his family. In the second, ten years later, the couple are married, and everyone is gathering to listen to the parents’ ideas about their plans for inheritance. In the final, most recent, scene, there is a funeral and the family regroups again. Despite the play’s title, which refers to Francis Fukuyama’s 1992 book about the apparent triumph of Western liberal democracy, there is almost nothing about politics: Blair is briefly mentioned, then Gordon Brown and finally Brexit, but nothing is discussed.

Instead of political content, what we get is a picture of generational tensions in a middle-class family. For while Carl has a moderately good job (working for Harriet’s dad) and that Polly is a successful lawyer, David and Sal think they could have done better, and are dissatisfied with the indifference of their children to social injustice. Their youngest child, Tom, lives at home and has mental health issues, so he can’t hold down a job. A lot of the discussion is about how the values of the baby-boom generation turn into resentment when their children don’t agree with their opinions, or imitate their actions. This turns into various shades of open antagonism as those who protested in the street and at Greenham Common see their offspring become part of the corporate bourgeoisie.

Sadly, for me at least, much of this comes across as leadenly banal. Okay, so parents have unrealistic expectations of their children (who knew?). Okay, so children resent the influence of their parents (who knew?). Okay, so every generation is free to make its own mistakes (who knew?). Worst of all is Thorne’s portrait of a left-wing family: mother is scatty, has no tact and she can’t cook; father is distant, pontificates and is insensitive. Oddly enough, the fact that this fictional family is inspired by Thorne’s own parents doesn’t make it in the least convincing, nor attractive. And, despite mentions of pregnancy, wanking and sexting, none of the writing feels either suitably excruciating nor actually emotionally truthful. It’s all just a bit of a laugh.

There’s something extremely typical and deeply reactionary about this kind of image of leftist activism: by turning the hopes and ideals of the baby-boomers into a comedy Thorne is simply belittling them and their kind, and implying that trying to change the world is both hopeless and a waste of time. If anyone really thinks this then there’s no point watching this show: just go and vote Tory at the next election. By the same token, if we are to judge plays at this venue on their ability to say something urgent about contemporary society then The End of History… must be judged a failure. As a comedy of manners it isn’t funny enough; as an exploration of family it’s not deep enough; and as a state-of-the-nation play it’s not political enough. In fact, it’s simply not enough.

Nor is the production anything to get excited about. Tiffany’s stage pictures are often too static; Grace Smart’s design, with its crumbling walls, is too obviously symbolic; and Hoggett’s short and dreamy scene changes are unexciting. Overall, the naturalistic tone is compromised because Sharp plays Sal as an OTT caricature comic while Morrissey is a brooding and unpredictable presence, lacking any attractive features. His long monologue about how socialist ideals necessitate sacrifices is finger-waggingly preachy. Of the three children, only Kate O’Flynn’s Polly has the right mixture of awkwardness and ambition, while Sam Swainsbury as the disappointing Carl, Laurie Davidson as the troubled Tom and Zoe Boyle as Harriet are as underwhelming as the play. Weakly plotted, indifferently written and lacking in punch, it feels like a real waste.

The End of History… is at the Royal Court until August 10. 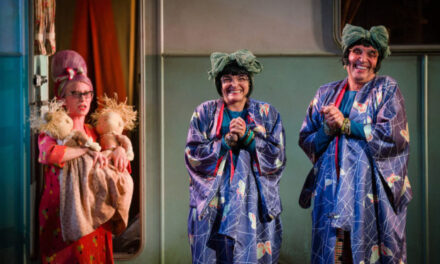