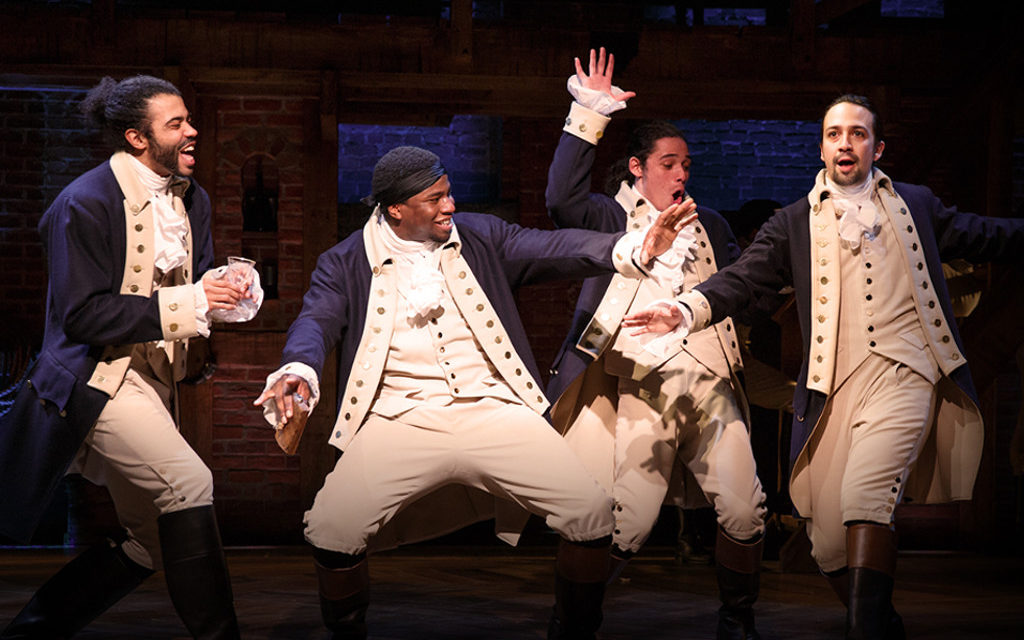 Such has been the demand for tickets to the London season of the multi-award-winning Broadway hip-hop sensation Hamilton that the show’s run has been extended and a lottery has been announced for the remaining seats. One wonders whether Boris Johnson, David Davis, Nigel Farage or any of the other leading advocates of Brexit will be among theatergoers thronging to the show over the next few months? Or maybe they’ll remember the experience of the US Vice-President-elect, Mike Pence, who was memorably booed by audiences when he attended a show shortly after the 2016 US election.

At the final curtain, Brandon Victor Dixon (who plays the show’s villain, Aaron Burr) stepped forward to deliver a message to Pence, in which he celebrated the diversity and rights of all Americans.

Vice President-elect Pence, welcome. Thank you for joining us at Hamilton–An American Musical. We, sir, are the diverse America who are alarmed and anxious that your new administration will not protect us, our planet, our children, our parents, or defend us and uphold our inalienable rights, sir. But we hope this show has inspired you to uphold our American values, and work on behalf of ALL of us.

It was a pointed message for a government seen by many as racist, misogynist, and prejudiced against immigrants.

The repeat eruption of race riots in the US in recent years made Hamilton a more topical show than perhaps even its writer, Lin-Manuel Miranda, had foreseen. The specter of Brexit now promises to have the same effect for London audiences–so will Johnson et al have the foresight to avoid Pence’s PR mistake in attending the show?

The stage musical has a long tradition of political activism reaching right back to the very first musical on the London stage, The Beggar’s Opera, which was just as politically provocative–and just as popular. The show opened at Lincoln Inn’s Fields in January 1728. Written by the satirist and poet, John Gay, a friend and collaborator of Alexander Pope and Jonathan Swift, it immediately became one of the most important creative outputs in the history of the British stage. 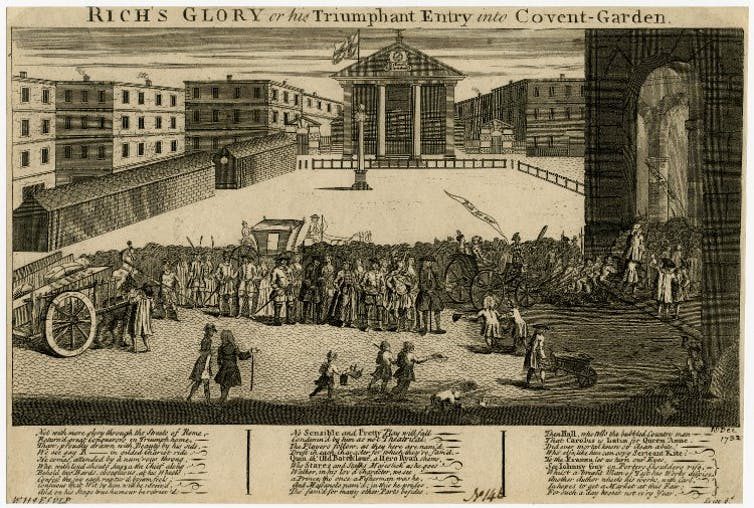 The Beggar’s Opera was an overnight sensation and unprecedented success, with the longest first run of any production to that day. The financial takings were so great, that the theatre’s owner, John Rich, was able to build a new Theatre Royal in Covent Garden (now The Royal Opera House). A surviving print satirizes the opening of the Theatre Royal, with John Gay carried, triumphantly, on a porter’s back into the theatre.

The musical’s female lead, Lavinia Fenton, became a star overnight, and her fame only increased when she ran away with the Duke of Bolton. William Hogarth commemorated both the musical and Fenton’s illicit relationship in a single painting: Lucy Lockitt (Fenton), dressed in virginal white, looks beyond her onstage lover, MacHeath, to meet Bolton’s gaze, sitting in a box at the far right of the stage. 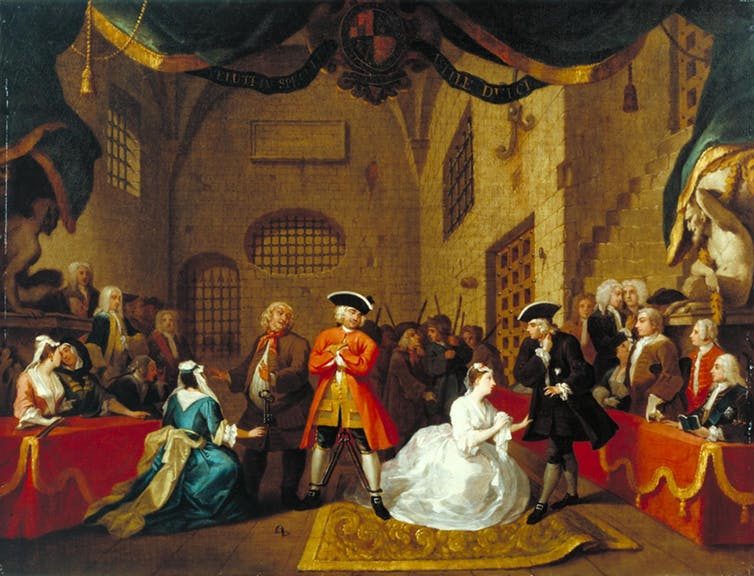 The success of The Beggar’s Opera was due, in part, to its gritty setting in Newgate Prison–and a cast of characters that included criminals, prostitutes, and corrupt prison officials. But it was also down to its political message. This was a hugely provocative work: the musical took satirical aim at the whole of British society, showing the hypocrisy and corruption that filtered down from the highest levels of power to the poorest on the streets. It suggested that Newgate Prison was a mirror for the nation, with the poorest condemned for committing the same crimes excused in the wealthy.

Contemporaries quickly recognized the musical’s implicit criticism of the then-prime minister, Robert Walpole. Two weeks after opening, an article in The Craftsman explicitly outlined the allusion to a prime minister seen by many as a corrupt and underhand force:

The very Title of this Piece and the principal Character, which is that of an Highwayman, sufficiently discover the mischievous Design of it; since by this Character every Body will understand One, who makes it his Business arbitrarily to levy and collect Money on the People for his own Use, and of which he always dreads to give an Account–Is not this squinting with a vengeance, and wounding Persons in Authority through the Sides of a common Malefactor?

Gay wrote a sequel, Polly (1729)–and this time the satire of Walpole was more overt, so much so that the prime minister took steps to ban it from the stage. This was to be one of several steps which culminated in the passing of the 1737 Stage Licensing Act. The Act enabled Walpole to curb the political voice of theatre, making it law that all productions had to submit to the controlling eyes of the government censor prior to performance.

In effect, the stage lost its freedom to speak out in ways that overtly challenged those in power. The most provocative dramatists of the time, including the writer Henry Fielding, abandoned the theatre and focused their energies into a newly developing literary form: the English novel. The Act would not be fully repealed until 1968.

The staging of Hamilton against the backdrop of Brexit feels like a landmark moment for the British stage, bringing–as it does–echoes of the very first musical, a work equally provocative, political and successful. Hamilton is unashamedly political–in this way, it should remind us of debates about the very purpose of theatre. Donald Trump responded to the booing of Pence with a tweet, claiming:

The Theater must always be a safe and special place.The cast of Hamilton was very rude last night to a very good man, Mike Pence. Apologize!

Trump was right to state that the theatre is a special place. Yet he failed to recognize that what makes theatre so special is the fact that it is not a safe space. In its many forms, the stage is a challenging, creative, and productive platform, used to ask difficult questions about morality and society–and about humanity itself.

This article originally appeared on The Conversation and has been reposted with permission. 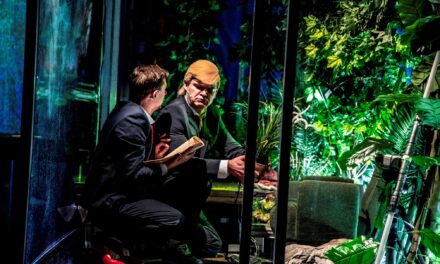 Dressing Room with a Bathrobe and a Gas Mask. “Trump and the Field of Maize” at the Polski Theatre, Bydgoszcz