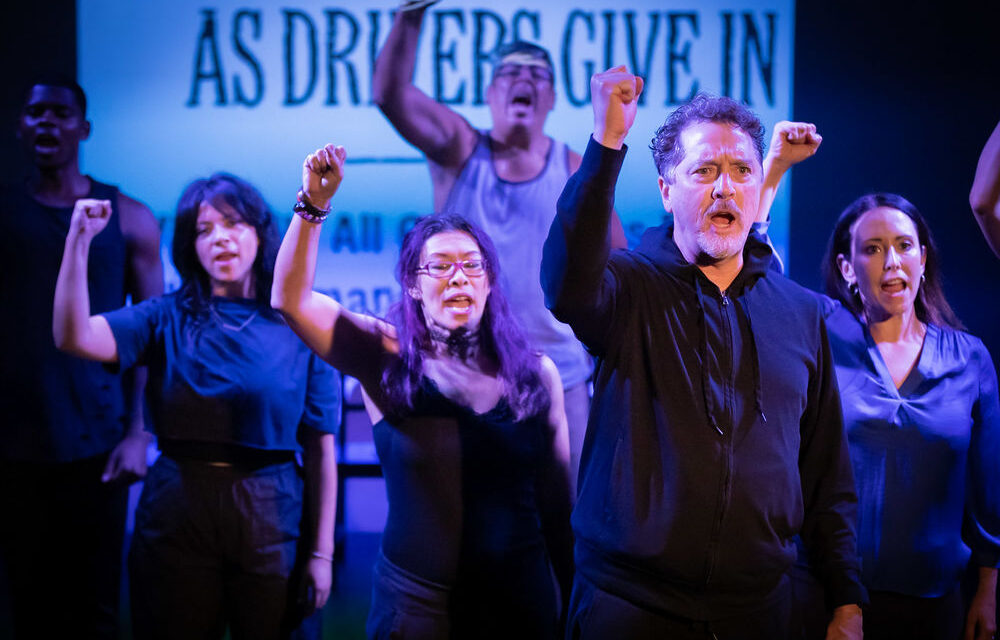 The Cast of "(It's Been 76 Years and We're) Still Waiting for Lefty". Photo courtesy of Theatre Unleashed via the Hollywood Fringe Festival Website.

Seventy-six years after Clifford Odets’ Waiting for Lefty premiered in New York, Theatre Unleashed in Los Angeles brought (It’s Been 76 Years and We’re) Still Waiting for Lefty to the Hollywood Fringe Festival, streamed and live on the stage.  Written by Gregory Crafts, based on a concept by Richard Piatt, who also directs, the play features poetry by Wade F. Wilson and original music by Michael Teoli.  It should be noted that in fine Fringe style, Crafts is also the producer, lighting designer, sound and projection designer, and Piatt is also the scene designer while producer Jenn Scuderi Crafts is also a scenic and props designer — all of which is executed well in this ‘get in and get out os the next show can get loaded in’ streamlined realm of production.  As noted in the opening segment, it’s 76 years later and not 75 because something called Covid-19 happened — as we all know. The Cast of (It’s Been 76 Years and We’re) Still Waiting for Lefty. Photo courtesy of Theatre Unleashed via the Hollywood Fringe Festival Website.

The play makes use of vignettes just as the original did but the framing device that holds them together is not a union strike, but a poem that is heard via a recording by a woman who asks us to like and subscribe to her feed on social media.  This may not be as successful for we don’t get to see people interact with each other we only hear that we are losing ourselves to technology and though that does connect to the first vignette where we watch a man and wife argue over the demands of his delivery job with (we presume) Amazon (only because she mentions the failed strike attempt) as he tells her that it’s only a matter of time before robots take all the shipping and delivery jobs, it doesn’t act as the strongest connective tissue between scenes.  That driver can’t stop to find a bathroom or turn on the air conditioning without the company noticing and penalizing him while she can’t work because she takes care of the baby now that she lost her job due to Covid.  We can imagine that the play is going to focus on social issues such as the need to pay caregivers and the need for unions. Fear of losing a job breaks people and this couple seems close to shattering apart. L to R: Leesette Gloria Medina as Edna and Jose Luis Cedillo as José in (It’s Been 76 years and We’re) Still Waiting for Lefty. Photo courtesy of Theatre Unleashed via the Hollywood Fringe Festival Website.

Things go a little off the expected path when she tells him about a speaker the company sent as a gift and he calls it a bug.  We may have not needed to go quite so far in that direction for it pulls us away from the couple and their very real issues that they are struggling to overcome.  As does Covid overall – it makes its appearance in the first two vignettes but it doesn’t feel like we needed it, especially in the second one where we meet a lesbian couple arguing over whether or not it is safe to go outside without a mask.  The woman who does not feel safe does not trust big Pharma and notes that Fauci owns the patent for the vaccine, per a Twitter post she saw.  It’s a wobbly start and this segment doesn’t feel connected to the previous one until the brother of that suspicious woman comes for a visit and she confronts him about his support for Trump.  The vignette began with the date “June 20, 2021” so we have to wonder a little bit why she’s so focused on Trump alone – there’s a whole political party and religious movement out there that wants to crush her rights, as she puts it, not just that one man who is no longer in the office, per the play’s own timeline.  It would have been simpler, it seems, to remove Covid and Trump from this beat and focus again on how policies and ideologies tear families apart. L to R: Michael Lutheran as Will and Courtney Bell as Ashley in (It’s Been 76 Years and We’re) Still Waiting for Lefty. Photo courtesy of Theatre Unleashed via the Hollywood Fringe Festival website.

Then the piece pivots kind of oddly and one might even say cowardly back to June 2, 2020, by placing four of the actors in chairs with laptops, in silhouette, while cards are projected on the back wall explaining that the murder (though the cards call it ‘the death’) of George Floyd led to public protests and cries to defund the police.  The police were sent to control the protests, which led to violence.  In Los Angeles, the city opened up a series of “listening sessions” over Zoom where we are told one speaker went viral… but we don’t see him, we only hear him, and the rage that he expresses is the rage that could have been expressed on the stage.  Cards note that all of this led to $150 million being cut from the police dept budget that totals almost 2 billion – but that’s a weak cheap attempt at a punch to the gut from a play that is purporting to reflect back on the original “Lefty” – a theatrical experience that seems to have ended with the people in the audience shouting ‘strike!’ along with the actors, elevating the audience’s connection to a play in ways reviewers of the time had never witnessed. The Cast of (It’s Been 76 Years and We’re) Still Waiting for Lefty. Photo courtesy of Theatre Unleashed via the Hollywood Fringe Festival Website.

On to Atlanta, GA, where an older white Republican politician asks a young black Republican to help him work on voting reform – meaning voter suppression.  The young man declines being asked to ‘Uncle Tom voter fraud’ but he doesn’t have the power, the older politician has gone behind his back and taken his job from him, already certain he would comply.  This one feels a little obvious from the start so it’s easy to get distracted even though the actors both commit fully to the work. It’s hard not to wish that the play had spent more time with George Floyd or possibly focused on the Stacey Abrams side of the fight against suppression rather than take the easy way out and call up the specter of the heartlessly corrupt GOP.  If we are ‘still waiting for Lefty’ as the title lets us know, where is ‘Lefty’ in this vignette? L to R: Patrick Randolph as Senator August and Ethan Williams as Baker in It’s Been 76 Years and We’re) Still Waiting for Lefty. Photo courtesy of Theatre Unleashed via the Hollywood Fringe Festival Website.

The last vignette centers around the #MeToo movement, which was a nice surprise for it’s been easy recently for the efforts to shine a light on this still very important social subject to be dimmed by larger pandemic/political/economic concerns.  We are back to a family situation here with a mother scolding her daughter for telling her story on Instagram, and this family connection makes the previous two vignettes feel even more out of place.  The mother almost predictably reveals her own stories about harassment at work, practically negating her experience by stating that other women had it much worse and conveniently skirting around the details.  In this vignette neither actor seemed to really hear the other, for the mother’s admission has no impact on the daughter and when the daughter asks whether her mother would have preferred if she had just been raped in the elevator, it doesn’t seem to land.  It’s also unsettling to hear the mother say that she wasn’t raped, as if that’s the only real marker of abuse.  The emotional connection here between the two pivots from frustration and anger to pride without that being earned. L to R: Rena Carter as Allison and Soda Persi as Nora in It’s Been 76 Years and We’re) Still Waiting for Lefty. Photo courtesy of Theatre Unleashed via the Hollywood Fringe Festival Website.

And then the cast breaks out in a dance party – and it takes everyone watching a few minutes to realize that we are watching the bows.  The dance party doesn’t really work with the rest of the play and feels like a half-thought-through addition, especially when we look back at the beginning of the play and recall this beautiful attempt at using silhouette and movement – something that would have been really welcome throughout the piece but is dropped right away.  The photos for the play make this look like a more physical rather than verbal creative journey and more of that would be very welcome.  Also, given the strength of that choreo it would have been really lovely to choreograph every scene change – if that was the intention, it could be taken further.  The ring light/cell stand could have been used more often it seems, given that it is placed downstage right, a constant draw to our eye.  Every actor in the piece seemed to bring all of their energy and emotion to the work, if we lost the thread as the viewer, it was due to the piece overall lacking focus and thematic clarity.