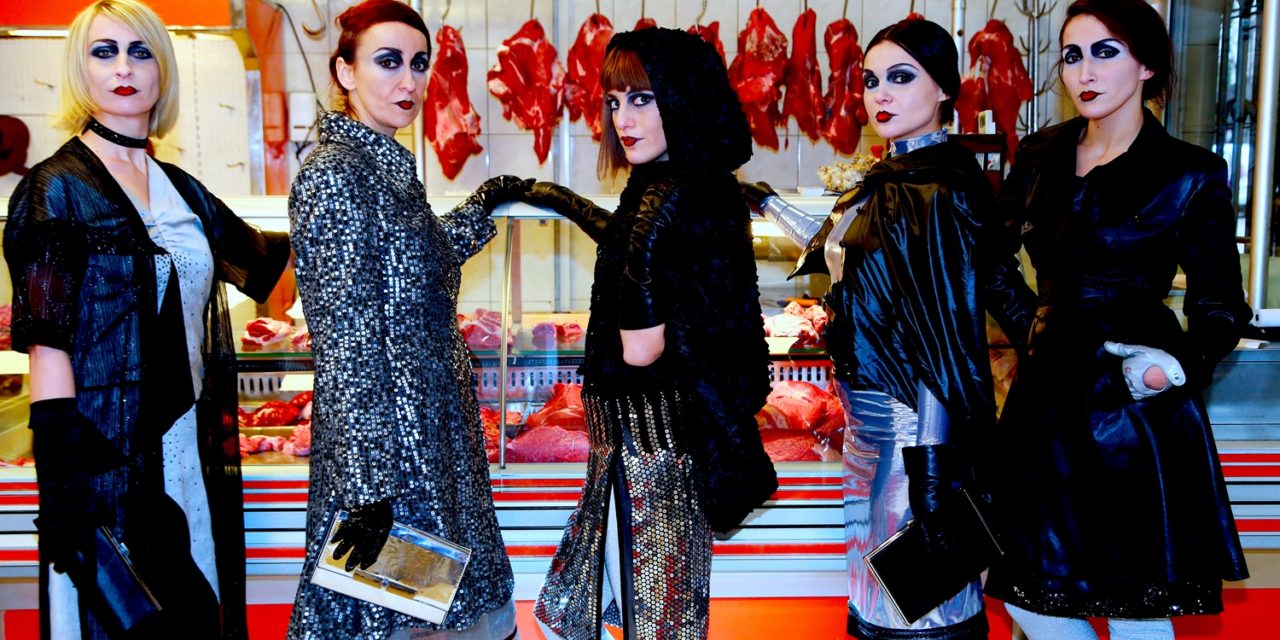 If five Charleston dancers, in crow-black and silvery dresses, pose at the counter of a butcher shop, this is a sign that something fishy/unusual is going on.

The dark shaded, powdered faces with exaggerated expressions these women bear are all representatives of eminent personae from the religious, political, and artistic fronts: Mother Teresa, Bill Clinton, Madeleine Albright, Carla del Ponte, Marina Abramović, Ulay; some less popular figures, like Elez Nikçi; and ones with no name at all: an organ donor and an organ seeker.

This is not the first play in which Jeton Neziraj, the most prolific playwright in Kosovo for more than a decade now, utilizes pop culture to create his characters. It seems that his expression is becoming more brave, provocative, and Brechtian on many levels; his language more piercing, raw, yet poetic; and above all, he is carrying the stamp of modernity to the Kosovar audience, for sure.

The play, in short, reminded me of the images I’d seen circulate on social media in which Queen Elizabeth, Barack Obama, and many other prominent figures are shown sitting on a toilet seat, underwear and all down, holding onto toilet paper. Just like we all disseminate extensions of physiological waste, they seem to, too! So do Jeton’s characters, who are deconstructions of such powerful images, whom not many would dare to touch upon.

Jeton’s non-linear, still somewhat storylined play is performed by five Kosovar actresses who are clearly able to interpret the play in a grotesque English. Considering that the play already has a life outside of Kosova (with an already booked tour) and is a Kosovar-German production, it does make sense for it to be in English. However, there’s a deeper reason for this. It is almost exclusively dedicated to the international community operating in Kosova towards building “peace, integration, and stability.” It is also voiced to the others, preoccupied with the country, sitting sturdily somewhere next to their desks in one of the Western centers of the world, or maybe Eastern, too!

The big historical decisions, like the birth of Kosova (the cutest part of the play in my opinion), are explained by actresses, sucking on their lollipops, comparatively similarly to the birth of Jesus Christ: a healthy baby (gender is not defined), born on a night with a half moon, or without, weighing four kilograms. The bombing of Belgrade by NATO is described as a blindfolded phone call between Mother Teresa, Bill Clinton, and additionally Madeleine Albright. Most of the time, we are reminded we are in the theatre and chuckling at the sarcastic cynicism with which these giant figures have been dragged down to a human level, with all their flaws and insecurities. We also laugh at the irony (framed with a lot of wit) of the statistics of loss during the war in Kosova and are trapped in the dilemma knowing well that this is not a laughable subject at all. In modern-day medicine, a political journalist as well as an adjunct professor of Medical Humanities for the School of Medicine at the University of California, Los Angeles, Norman Cousins, called this effect “laughter therapy.” 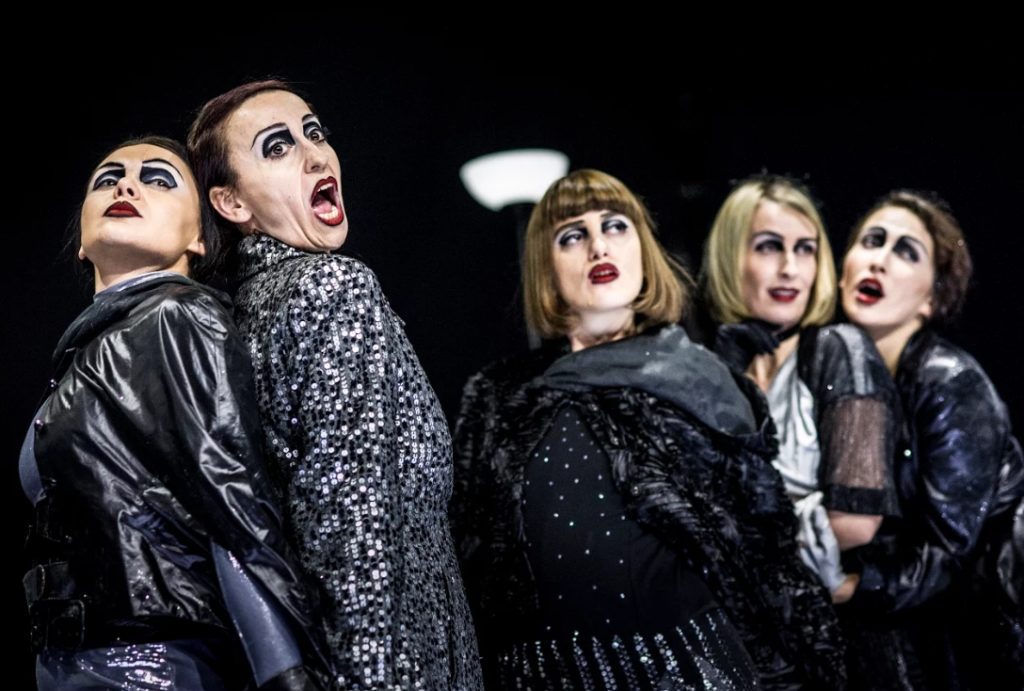 Characters like Madeleine Albright, Carla del Ponte, and Marina Abramović are somewhat more developed and three-dimensional than the others. Still, we are constantly juggling many storylines and a silent Charleston dance, which to me is an effort to (un)cover for the restlessness that was very visible amongst the audience members. “Not sure what to make of this form of expression” is what I think went through most of the audience’s minds. Minds. That’s what the play was able to touch and aimed to, I believe. The critical minds that are supposed to reflect on what it means to interfere with, enable, and intervene in the creation of a country, its obstacles, and the unpredicted outcomes. Just like in the case of Marina Abramović, who depracates theatre as fake as opposed to her creations through live performance art, “where the blood is real”; or the former Kosovar president’s bodyguard, who is a ballet teacher at the same time; or the five women extracted from their implied roles into simply women trying to understand what womanhood and a woman’s role and mission in life should be – all is a mixture of some sort of intertwined, inner burlesque dialogue aiming to confuse the audience regarding what the meaning of anything is, or if there is one meaning to anything, or that there are far too many. Thus the word “border” is tongue-twisted with “brothel” and “prosecution” with “prostitution.” Pronounced fast, they almost sound the same!

The play sort of focuses on the image of the former Hague prosecutor Carla del Ponte as a moral nerd, true to the core of her beliefs. She freaks out at hearing that her “completed project” Kosova has been involved in organ trafficking, so she flies in to try to fix this. Charged with a despising view of the local people, she enters Starbucks in Kosova, totally sure that it won’t meet her European Standards, but is utterly surprised to find out that her favorite Vanilla Chai Latte tastes exactly the same as it does in Europe. Furthermore, she faces an ethical trial when her brother is in need of a kidney and she fails to meet her values, probably by becoming a victim of the Kosovar nepotism or the instinctive human emotion. The concept of “awakening” becomes more dramatic when the organ donor, a poor Kosovar Serb, dies in the ambulance car as a result of the road blockage due to a running marathon where the winner imminently needs to be the first Kosovar woman runner – in order to push women’s rights forward. The scenery moving around in darkness during the telling of this story, while the actresses carry the kidney in a transparent led lit box, is one of the few emotionally thrilling moments of a play that otherwise abides to rather emit a Verfremdungseffect (distancing effect).

Many frustrated Kosovars who watched the play felt that it voiced their views. Many non-political non-Kosovars went home to do research on who some of these characters might be in real life. The politically engaged viewers probably thought the play was politically incorrect, which I guess is exactly what the play was aiming to be. Somewhere in between, the ones who didn’t understand much found it to be an exciting and fun experience. 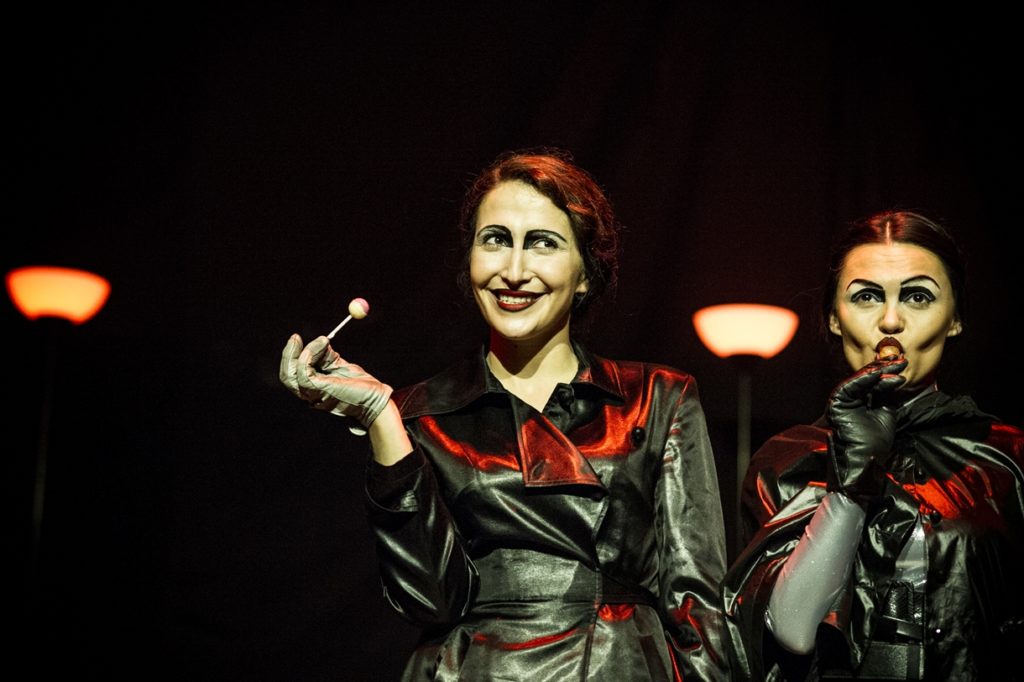 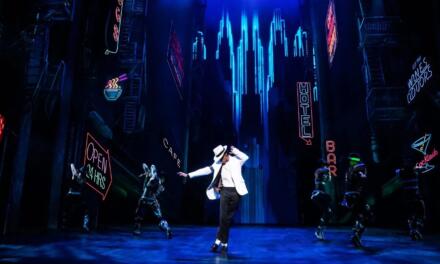 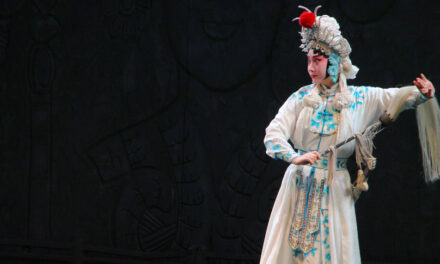