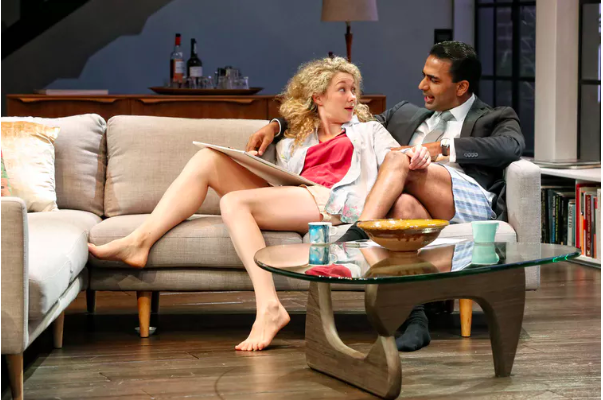 Ayad Akhtar’s Disgraced has arrived in Sydney from America on the back of international recognition. Akhtar has said he hopes, with this play, “to connect viscerally with the audience,” and to provide it with “an access point to a state of presence.”

Akhtar wants to make us more intimately aware of our contemporary moment, especially as it’s defined by politico-religious conflicts between the West and Islam.

Not since the heady days of 1992 and David Mamet’s Oleanna has a new American play seemed so much to capture current political debate.

Disgraced premiered in 2012 in that engine-room of contemporary American theatre-making, Chicago. But it quickly made its way to New York and, following an off-Broadway run, it won the 2013 Pulitzer Prize for Drama. A London and finally a Broadway run followed in 2014-15.

This is Akhtar’s first play but the impetus behind the work – a concern with Pakistani-American identity in the era of the “War on Terror” – has also motivated his other projects. This includes co-writing credits on the screenplay for The War Within, a 2005 film about the implications of radicalization for young people, and a novel, American Dervish, which features a Pakistani-American teenager growing up in Milwaukee.

Unlike the protagonists of the film and the novel, the privileged and wealthy Upper East-Side inhabitants of Disgraced might seem like they should be insulated from–even immunized against–the impact of global politics and religious conflict. Their privilege and wealth should keep all that at arms’ length, surely?

The central character, Amir, (played here in this Sydney Theatre Company production by Sachin Joab) is an up-and-coming New York lawyer, expecting to be made partner any day. His wife, Emily (Sophie Ross) is on the cusp of an equally promising career as an artist.

The New York loft apartment in which all the action takes place is blandly stylish but, for Amir (played by Joab as a blusteringly confident A-type corporate lawyer) it is part of an achieved identity that he works hard to sustain. He has shaken off any connections with his Muslim upbringing, describing himself at one point as an “apostate”. But, with the arrival of a nephew from Pakistan – Abe (Shiv Palekar) – and with his Anglo wife’s artistic flirtations with Islam, this apparently protected life is revealed to be extremely precarious.

The play’s highpoint (and this production’s) is a dinner party that escalates into a religious and political argument between Amir, Emily, and another couple: Isaac, the Jewish art-dealer (Glenn Hazeldine) who is bankrolling Emily’s forays into pseudo-religious art and his wife Jory, an African American lawyer who is Amir’s rival for the place of partner in his law firm (Paula Arundell).

The dinner party argument often represents a middle-class capacity to keep real conflict at bay through a proxy war of words. But here, it is part of a plot that sees all five protagonists cut adrift by unbridgeable differences. These people are tenuously held together by friendship, family, professional self-interest, and marriage. Not one relationship will survive the end of the play.

Disgraced is, essentially, a melodrama. The action is punctuated by moments of high drama, revelation, and hot-tempered crisis. Its heart is worn on its sleeve and, in this production, the performances of Arundell as Jory and Joab as Amir are particularly well-attuned to Akhtar’s dialogue, which often teeters on the brink of comedy before plunging us all into a world of implacable fear and loathing.

Not for Akhtar an Ibsenian hinting at hidden motivations. We know what these characters think and feel. And that, in a way, is the problem; their differences are revealed as utterly insoluble. “There’s a reason”, Isaac spits at Amir as he leaves the ill-fated dinner, “they call you people animals.” 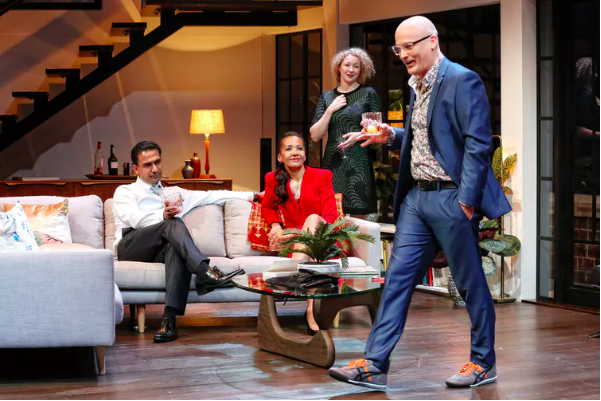 In a short essay on the politics of theatre (Rhapsody For The Theatre) the French philosopher, Alain Badiou, makes a distinction between what he calls “Theatre with a capital T” and “theatre” which he places in inverted commas. He argues that we tend to try and protect ourselves against the impact of big Theatre, which he characterizes as always saying something about our communal lives. Instead, we end up going to the politely attenuated experience of “theatre” which, he writes, “induces a convivial satisfaction in those who hate truth.”

Badiou does not, I think, believe that big-T Theatre ever really exists in pure form. How could it? The Sydney theatre-going demographic is likely to be even more immunized against global religious and political violence than Akhtar’s Upper East-Side New Yorkers. But what we might see, occasionally, is big-T Theatre rippling underneath the surface of polite “theatre”. Disgraced is definitely a ripple.

This post originally appeared on The Conversation on May 2, 2016, and has been reposted with permission. 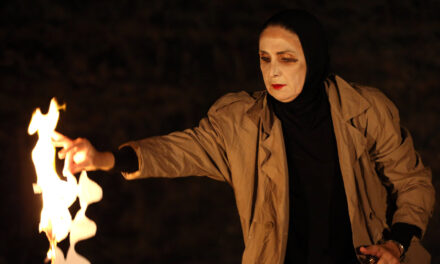