“No 43-Filth” Trapped In Our Useless And Muddy Reality Of Being? 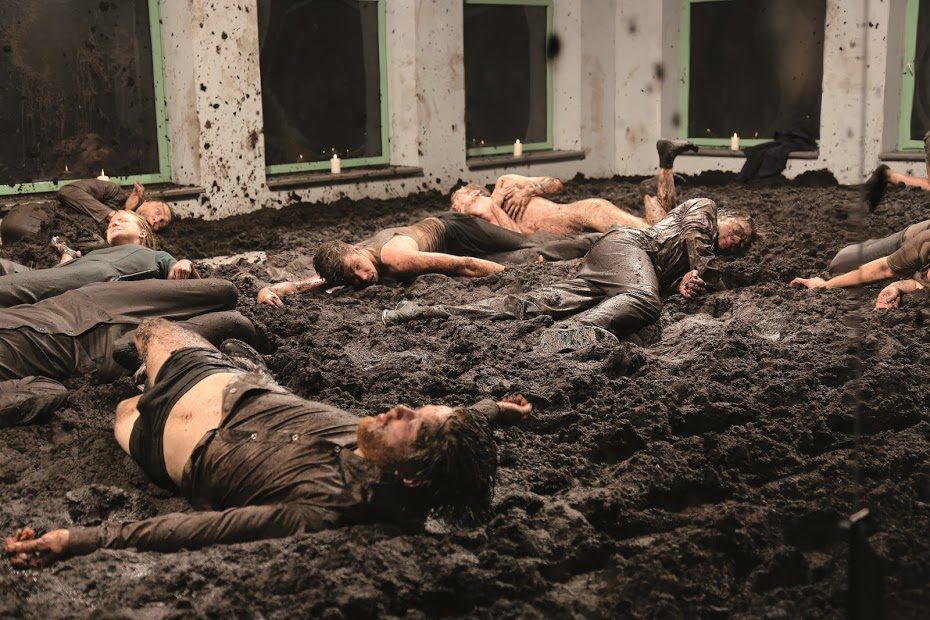 A production from Tallin, Estonia: the winner of XIV Europe Prize Theatrical Realities, 2017.

The end of the world has come, there is nowhere to go, we are trapped in our uselessness and the muddy reality of being…that is the message that Theatre N099 and its performance No 43–Filth want to convey.  The statement is not new, the passion it carries is not surprising, the methods it uses are curious.

The collective “we” the company uses–both in its promotional material and on stage–is recognizable but bothering. Do we really come from mud and die in it? Are we all the soul-less golems with no faith or fear left? Is there any hope left? The Estonian directors Tiit Ojasoo and Ene-Liis Semper seem to have no positive answer.

No 43 – Filth is a three-part presentation created in the language of physical theatre. It is inspired by the novel The Petty Demon written in 1907 by a Russian Symbolist poet Fyodor Sologub. In the center of the novel is an abusive school teacher Peredonov who is using his fiancée Varvara to advance his career. Varvara has her own conspiracy going.  With the help of an old spinster Grushina, she brings Peredonov to the altar. There are many more obscure characters in this work, all interconnected through lust, paranoia and general contempt for each other. So in its claustrophobic and filthy atmosphere, the novel serves Tiit Ojasoo and Ene-Liis Semper an excellent springboard to create their own tale of the end of the world. So, if the audience is not familiar with Sologub’s novel, No 43– Filth provides enough visual and sound clues to follow its gloomy message, including a direct quotation from Harold Pinter’s poem American Football.

On stage, there is a transparent glass and betton structure with no visible exits or entrances. The floor is covered with a thick layer of mud reaching almost to the performers’ knees. As the audience enters, we see nine performers–six males and three females–on stage. Dressed in contemporary clothes, they are stomping their feet in mud. The atmosphere is mildly aggressive. It is suggested both in the rhythmically moving bodies and the sound score accompanying them.

As we take our seats, the action stops with one of the performers ordering the audience to turn off our mobile devices and not take photos. Part one begins. Led by a repetitive sound-score made of romantic waltzes the action presents the ever-famous picture of total miscommunication and misconduct between people. Even if they wanted to start communicating, with their feet in the mud there is no gracefulness or help: each to their own, everybody to themselves. The action becomes more aggressive and violent. There is a promise of physical assault and rape, humiliation and ferocity.

Part Two, the most suggestive of Sologub’s novel, brings this promise to life. There is paranoia and violence, a wedding and an affair, a religious ritual and a funeral. Gradually, the production becomes highly symbolic, with the images suggestive of Christian iconography on one hand and pagan and even scatological rituals on the other.

The world, the directors remind us scene after scene, is at its very end. The catastrophe has arrived: the end is all–environmental, social, economic, political, moral, and ethical. Running, falling, making love, swimming in mud are the ways of life Sologub’s characters knew and we are now subjected to.

These images appeal to the audience’s violent and wild imagination, at times they are repulsive but always beautiful. What bothered me the most, however, is the ambiguity of the implied “we” as this performance’s protagonist: the “we” that spectators were to recognize and empathize with.

To protect the audience from being covered in mud, the directors erased transparent barriers between the stage and the audience. This technical necessity created an unexpected symbolic effect: it positioned spectators in the role of the observes, so the directors’ intention to implicate us (the audience) into the collective we (the performers) became undermined. These barriers created a real, not a symbolic, sense of alienation. They granted the audience a chance of an emotional escape. At the end of all that: the violence, the humiliation, the mud, remain on the other side of the border. It is not us, it is them–the only too well known binary that the company wished to escape…No 43–Filth is not about goodness or spiritual transformation; it is not even about rage or violence. It is all about the emptiness and the impotence of any promise–the total Nietzschean nihilism. But even Brecht, the didactic moralist of the 20th century, would seek the goodness of human nature. Of course, we would not want to leave the show covered in mud. But is it too hypocritical of me to question this production because I remained literally untouched by it?

This post originally appeared in The Capital Critics Circle on December 15, 2017, and has been reposted with permission.