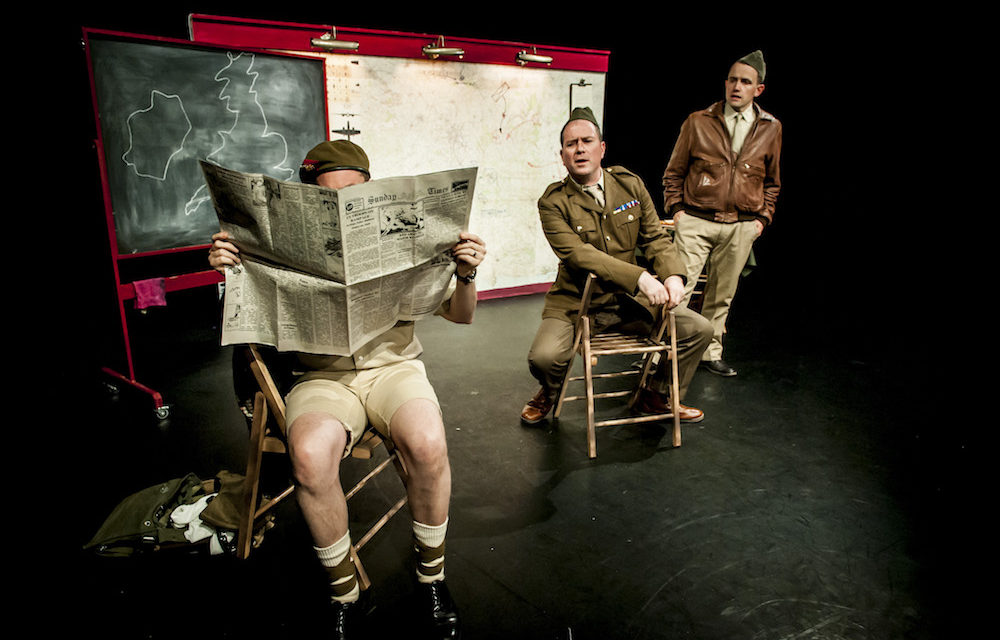 We’re familiar, perhaps too familiar, with the image of Dad’s Army, gamely tramping down the country lanes and across the verdant fields of southern England during the second world war. But, at the time, there was also another army stationed in this green and pleasant land: the US Army. To help young American servicemen, most of whom had never been outside their homeland, to understand Britain and the British, the US War Department published a pamphlet called Instructions for American Servicemen in Britain, which forms the inspiration for this show.

Originally issued in 1942, the 5000-word pamphlet was republished in 2005, and has been praised as a crash course in the quirks and customs of British life, an “Ordnance survey map” of the country’s psyche. It features everything from the weather to cricket, with plenty of good advice about how to respond to the odd behavior and unfamiliar language of this island race. The Real MacGuffins — a comedy trio — have taken this material and blended it into a theatre piece that explores our ever-changing national identity and our relations with what we used to call our American cousins.

The show is set in a village hall in Nether Middleton, somewhere in southern England. Nearby, the 8th US Air Force base is stationed, and Lieutenant Eugene Schultz begins by berating his men (the audience) about a drunken rampage by them that has made the inside pages of The Times and that displays, to put it mildly, cultural insensitivity. A prize marrow has been abused and a local bobby locked in his own cell. Schultz, or Gene, reveals that the pamphlet has been used by his men as toilet paper and that they need additional tutoring in the British way of life.

Soon, Gene is joined by their Colonel, who is the base commander and was once a farm boy from Iowa, who introduces Major Randolph Gibbons, a British officer assigned to help smooth over cultural differences. Together the three men attempt to highlight the familiar problems of language and customs. All this results in unashamedly broad physical comedy, although, as usual, inspired silliness is an acquired taste. Some jokes (“it’s been raining cats and frogs”) and some observations (“a country united by a shared mutual resentment”) work better than others, and at the show’s most provocative, the Brits in wartime are characterized as “yellow-bellied retreat specialists.” But mainly there’s an air of nostalgia about the whole thing that is too unchallenging for words.

The second part of the evening begins with a short sketch set in a Nazi spy school, where recruits are taught about the stiff-upper lip, and other British characteristics, such as understatement. Performed using puppets, this is a gently amusing interlude. Then, in expectation of an imminent visit by PM Winston Churchill, the three Allies — in a foolhardy but sporadically funny attempt to paper over national differences — prepare a hybrid game of cricket with baseball characteristics. As new characters are introduced (the local lord, Gibbons’s mum, etc), the stomach churning awfulness of wartime food is explored and a final Morris dance, performed with full audience participation to the swing music of Glenn Miller, brings the show to a foot-stomping conclusion.

All the characteristics of 1940s Britishness (stoicism, emotional restraint, class-consciousness, hobbyist tendencies, restrictive rationing and, just occasionally, hidden homosexuality) are economically and clearly brought out by Dan March, James Millard, Matt Sheahan and John Walton, who devised the show together. Walton directs on a bare stage with some elementary props designed by Martin Thomas, while March, Millard, and Sheahan play several roles each. I particularly liked March’s goggle-eyed impressions of American bewilderment and Sheahan’s expression of English reserve under fire; Millard’s open-hearted hosting was likewise effective.

Created by theatre company Fol Espoir along with the Real MacGuffins, the show offers various varieties of energetic jinks, high, low, and medium. But the material crosses very familiar territory and is never really anything more than a series of unchallengingly humorous sketches. After a while, the predictability starts to irritate and the audience participation might not appeal to everyone. Still, if you love the BBC’s Dad’s Army, or are already a fan of Real MacGuffins, you might well enjoy this.

Instructions for American Servicemen in Britain is at Jermyn Street Theatre until July 29.