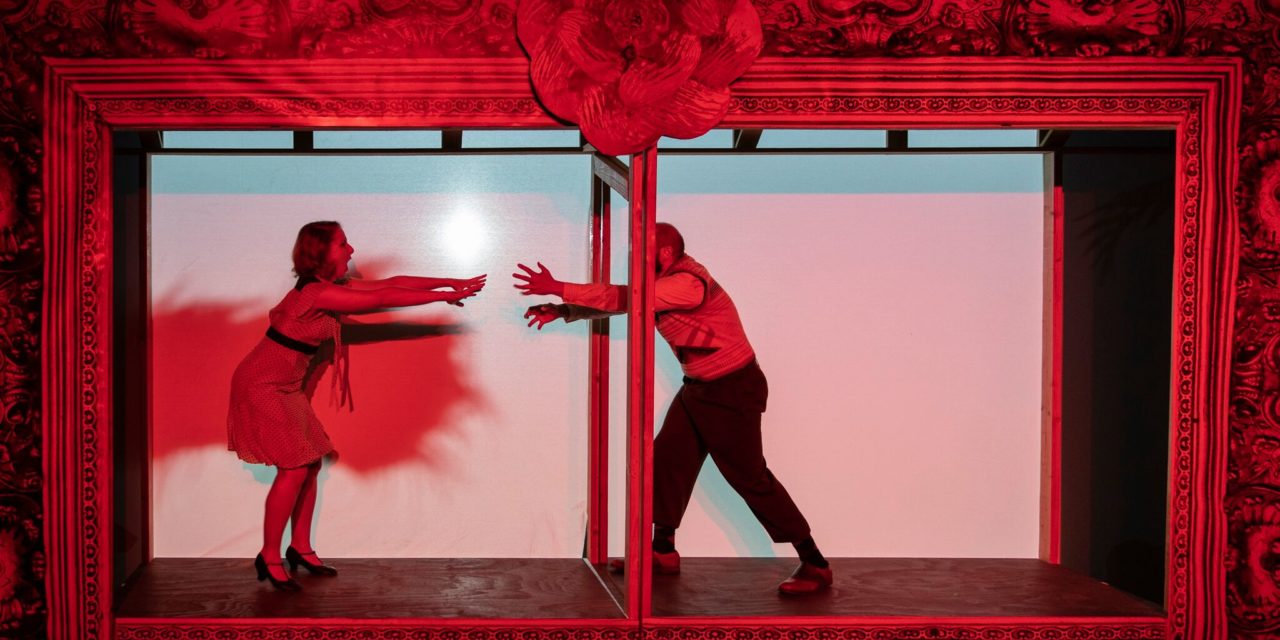 Molly Pope and Hanlon Smith-Dorsey in “The Making of King Kong,” presented by the Target Margin Theater. (Courtesy of Maria Baranova).

Slipping on a banana peel hurts. Shouldn’t you have been watching where you were stepping, being aware of your stride? Or maybe your fall was the fault of whoever carelessly threw the peel to the ground. Maybe it was a trap. That’d hurt more, wouldn’t it?

When a 1930s King Kong peered through the window of sleeping beauty, safe in the haven of her sky-scraping apartment, his eyes white, teeth yellow and skin black as night, so present was the racist fear of the black rapist. When he swung from the spire of the Empire State Building, the twisting face of communism, arriving to blacken the purity of the American free market, corrupted the skyline. When Fay Wray, Hollywood starlight, screamed in his calloused palm, squirming to break free, the death of the white race in the grips of black migration materialized on the silver screen, and when that cultural monster broke through the chains of civility, a frightening modernity—so it seems when looking back today—must have dawned on its Depression-era audience.

Or maybe we’ve all slipped on a banana peel.

The satire at the heart of Lisa Clair’s The Making of King Kong, presented by Target Margin Theater, is not aimed at that famed monster himself. If anything, Kong is the most reasonable being in the room. It satirizes us, arriving with pink pussy hats, just as I did, to digest the myth and symbol of that archetypal boogieman, in all his profoundly racist, sexist and imperialist manifestations. Absurd in this production are those who shoot lasers out of their vaginas to attack the monster, absurd is Fay Wray (Molly Pope), reaching orgasm in the clutches of King Kong’s fabricated grasp.

To be clear, what Lisa Clair has placed before her audience is no blatantly academic study. That Target Margin’s Doxsee Theater hangs off the edge of the world, sloughing off Sunset Park’s sleepy streets for the urban dystopia of Brooklyn’s rotting industrial front, is fitting. The Making of King Kong itself teeters in and out of pure insanity, absurdism and pointlessness, irony and sarcasm, like a vaudeville show on an acid trip or a cabinet of horrifying curiosities. Embraced by the refreshing unpredictability of the avant-garde, The Making of King Kong explores the production of American cinema’s greatest monster through the twisted mind of director Merian C. Cooper (Ean Sheehy), the fragile, crumbling masculinity of cinematographer Ernest Shoedsack (Hanlon Smith-Dorsey) and the porcelain femininity of Fay Wray (Molly Pope).

King Kong never does appear in this production. We can hear him, we think, and we can feel him rumble the interior of this makeshift theater, but we never see him. If in 1933 he embodied all those anxieties of a nation plunged into a severe economic depression, of a newly modern America threatened by global fascism and a citizenry of varied color and gender, so too is he the manifestation of all our contemporary paranoia. Today, Lisa Clair suggests, he could be the ire of political correctness, a terrorizing behemoth of the white crusader’s feigned concern for social justice.

Easily the most absurd scene in this psychedelic experiment depicts Cooper’s arrival at his makeshift jungle set, instead, encountering a group of “post-racial,” yoga-practicing humanoids who’ve ousted the black actors hired to play tribe members because they themselves were “problematic.” Chanting about “pussy power” and quinoa, about breaking Kong’s mammoth masculinity in two, the congregation is as cartoonish as Cooper, who’s arrived to play the most dangerous game with a house-sized gorilla.

There’s no shared language between these absurd caricatures, and hearing them talk to one another is itself the dramatization of an absurdist text, surely a satire of what we hope to achieve by embodying all our modern frustrations in the obvious monster of King Kong.

Claire, though wrapped in the scrappy, eccentric volatility of experimental theater, is a challenging and provoking playwright, smart and admirably critical—hilarious, too. Target Margin’s radical theatrical space, employed by unwound theater-makers like director Eugene Ma, the type of people who’d think to craft vaginas out of hanging, unzipped and sideways neon fanny-packs (costumes by Normandy Sherwood), is a brilliant match for her demanding questions. The cast they’ve assembled, led by Molly Pope (An Audience With Molly Pope) takes all her irreverence in stride.

Of course, the 1933 King Kong is a profoundly offensive artifact of American cinema. And clear as The Making of King Kong self destructs is that Claire’s hallucinatory descent into femininity and masculinity, sex and perversion, race and bigotry is but a brilliant exercise in absurdist pataphysics, in imaginary solutions. Hideous monsters do trouble our political reality, the cast reminds us in an out-of-character epilogue. Go searching to embody our modern cultural monsters in an ancient gorilla, they say, and you’ll slip on a banana peel you’ve thrown there yourself. 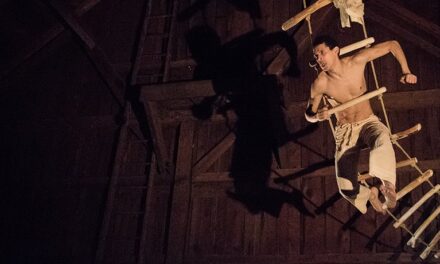